“Gentiles are always to blame”—this is perhaps one of the single most overriding characteristics of the Jewish Supremacist psychological make-up, as demonstrated once again by a leading Zionist journalist’s reaction to the recent ADL Report on “worldwide anti-Semitism.” 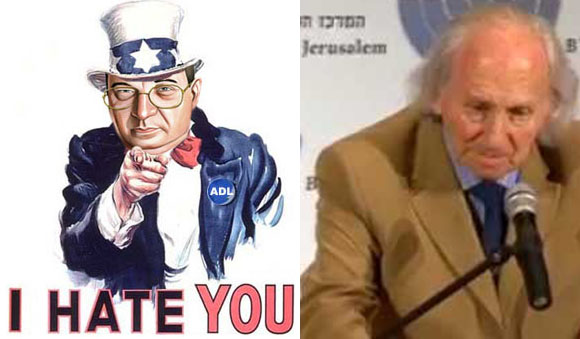 Noah Klieger, a veteran Zionist who claims to have organized the mass immigration of many Jews to Palestine on the ship “Exodus” and who also, incredibly, claims even to have survived Auschwitz, is considered the doyen of Israeli sports journalism.

In an opinion piece published in the Israel Ynet News service dealing with the ADL report, Klieger turned out true to form and blamed Christianity for “anti-Semitism.”

In his remarks, Klieger wrote that the ADL survey proves that while anti-Semitism is very common in Muslim countries, it originates in Christianity.

“Anti-Semitism is of course widespread in very high numbers in the Arab countries in particular, and in the Muslim countries in general.

“As I have known for a long time now, the survey reveals that it is much more common in the devout Christian countries than in other countries in the West.

“This proves that anti-Semitism originates in Christianity and in its attacks on the Jewish people since its foundation about 2,000 years ago.”

Klieger goes on to say that the “masses in eastern European countries or in central Europe – including the Hungarians, the Austrians and the Germans. They will remain anti-Semitic in any event no matter what.”

This “blame the Gentiles” tactic is one that is a common thread amongst Jewish Supremacists. In fact, as Kriegler repeats in this article, this actually amounts to a blood libel against Europeans in particular: they they have some type of inherent “defect” which always makes them “anti-Semitic.”

In fact, this blood libel forms a central core thesis to the Jewish Supremacist world view, which believes that Jews are chosen by God above all others on earth, and that they have a divine right to rule over everyone else.

According to this worldview, anyone who opposes this divine right of Jews to rule is automatically an “anti-Semite.”

The reality is—as is borne out time and time again—that it is Jewish behavior which causes “anti-Semitism.”

Jewish Supremacists like Klieger believe—and would have everyone else believe it as well—that “anti-Semitism” is some sort of irrational belief system to which Gentiles automatically and “always” subscribe to, no matter what.

Indeed, if one has to go by Jewish history, then opposition to Jewish behavior goes back even further than than–to the time of the Macedonian Greek occupation of the Middle East under Alexander the Great. The Jewish event of Hannukah, for example, is a Jewish “celebration” of victory of “anti-Semites” in ancient Persia, circa 450 BC!

The truth is that what they call “anti-Semitism” is only generated by Jewish Supremacist behavior, and is not the result of some automatically inbred behavioural trait.

1. Jewish Supremacists did not engage in outright hypocrisy on a large number of issues including immigration, homosexual marriage, and many other issues, and

2.  Jewish Supremacists did not control the US government, and

3. Jewish Supremacists were not such vicious anti-Gentile racists, and

4. Jewish Supremacists had not been behind the greatest reigns of terror in history, and

5. Jewish Supremacists had not been behind the banking and financial swindles, and

6. Jewish Supremacists did not actively discriminate against Gentiles at Ivy League colleges, and

7. Jewish Supremacists had not been behind the Kosher food swindle, and

8. Jewish Supremacists had not plunged America and other countries into wars on behalf of Israel, and

9. Jewish Supremacists did not “arrange” billions of dollars of aid to Israel every year from American taxpayers, and

10. Jewish Supremacists did not control Hollywood to spew out anti-Gentile poison, and

11. Jewish Supremacists did not control the mass media and spew out anti-Gentile poison, then “anti-Semitism” would not exist.

In the words of Joe Sobran: An anti-Semite used to be someone who did not like Jews. Today it is someone who the Jews do not like.

Previous Post Diabetes: The Poison that Lurks in Your Daily Soft Drink

Next Post Hear Dr. David Duke on the Illustrated Protocols of Zion and How Jewish Supremacists Blame Gentiles