Now available on the Rense Radio Network archive. Hear Dr. David Duke discuss the tremendous impact on his new documentary on his upcoming book, The Illustrated Protocols of Zion. 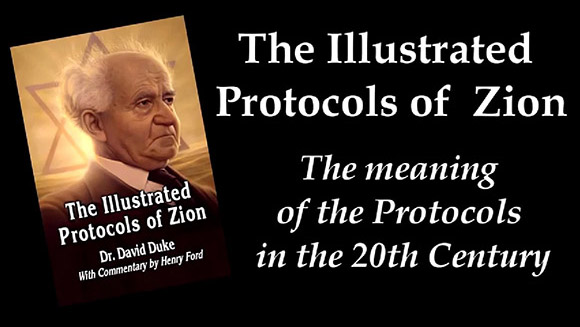 He explains the realism of Jewish extremism and Jewish racism and illustrates that in the program by pointing out the Jewish attacks on his video by Jewish racists and supremacists that came out within hours of his new video being uploaded.

He then goes into the latest Jewish mainstream media attack on European Christians for “antisemitism” saying that anti-semitism originated in European Christians, when Jewish literature is full of hatred against Egyptians, Persians, Greeks, Romans, Syrians and others long before organized Christianity.

Then he brings on Dr. Patrick Slattery who discusses the truth and impact of the new video and book The Illustrated Protocols of Zion, and why it needs your support right now! Be sure to share todays show and make a generous gift to this vital work because your help is absolutely vital for its ultimate success!