By Dr. David Duke — The former Australian Prime Minister Malcolm Fraser (who is said by many to be actually Jewish)  has joined the growing list of prominent public personalities to “take the plunge” and publicly identify the Jewish Lobby as a pernicious influence in public affairs.

Once again the assertions of the Protocols of Zion concerning inordinate Jewish influence over governments have been proven correct. Perhaps they could be dismissed if it were only Australia, but this scenario can be repeated in country after country, and  of course, it is most dominant in the most powerful economic and military power on Earth: the United States of America. 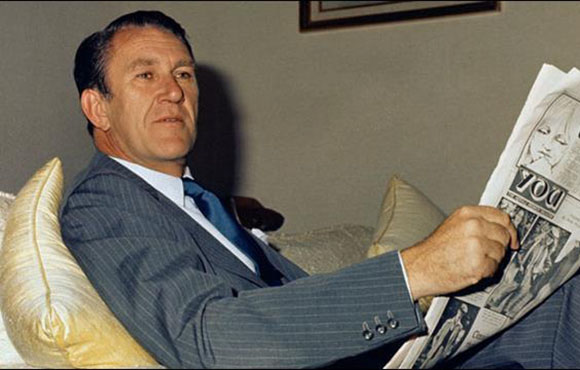 The revelations are another example of the importance of my new book, The Illustrated Protocols of Zion, for the Jewish manipulation of the Australian government are completely in line with the original Protocols and in my new book that proves the underlying assertions of the Protocols.

Fraser was a slave to Jewish supremacist interests unfailingly in his term of office and was instrumental in opening the gates of immigration in subservience to the Jewish “divide and conquer” scenario. But, as you will see, Prime Minister Fraser also had the chutzpah to expose the Israeli terrorist attack on the USS Liberty, an attack that the Jewish dominated media has dropped down Orwell’s Memory Hole.

Fraser is former leader of Australia’s Liberal Party who was the 22nd Prime Minister of Australia. He came to power in 1975 and led his country until 1983.

In a radio interview with the Australian Broadcasting Corporation (ABC) of Melbourne, while promoting his new book, “Dangerous Allies,” Fraser pulled no punches in describing how Israel had betrayed America with the attack on the USS Liberty, how the Jewish Supremacists in Australia controlled the government in that country and how the Jewish Lobby went to work to put Israel’s interests first.

Speaking to hosts Jon Faine and Professor Damien Kingsbury of Deakin University, on the May 9, 2014 The Conversation Hour show, Fraser was asked about Autralia’s “allies” and “enemies” and what had caused Australia to become involved in wars such as Iraq—and what might cause that country to enter a “fourth war” (in Syria).

It was while this topic was being discussed, that Fraser took the brave step of standing up in public and naming the Jewish Lobby as the most important factor in determining Australian foreign policy.

“Israel years ago, during one of the wars, killed 30 or 40 Americans on a spy ship in the Western Mediterranean,” Fraser told Faine.

“The Americans tried to cover it up. It wasn’t a mistake. It was deliberate.”

When asked on what he based the claim, Fraser said: “Information I have. I am not going to tell you the source.”

Asked by Faine if he agreed that “the pro-Israel and in particular Jewish community lobby in Australia wielded too much power”, Fraser responded, “They certainly do.”

“The Jewish community seek to get Australia to support policies as defined by Israel.”

His comments were naturally enough met with cries of denial by the formal Jewish lobby in Australia, who, in their usual fashion, did not try and debate the facts but merely resorted to name calling as a “response.”

The Jewish leaders are now shocked that their boot-licking subservient Australian Prime Minister has gone rogue on them.

Liebler added that “This is not the same Malcolm Fraser … It seems he’s developed an antagonism towards the Jewish community and Israel for reasons which are certainly not apparent to me or to anyone else.”

Once again, the typical Jewish tactic of blaming Gentiles can be seen at work here: Just because someone dares to speak the truth, Jewish Supremacists detect it as “anti-Semitic.”