The year 2015 has started off with reams of publicity for Dr. David Duke over the artificial uproar created by the Zio-media over Rep. Steve Scalise—but in fact this has merely crowned off another highly successful year of activism and outreach by Dr. Duke and DavidDuke.com. 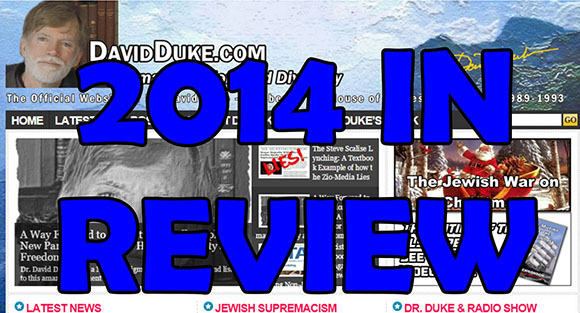 Among the many highlights of the 2014:

– In January 2014, DavidDuke.com exclusively revealed that the pro-Zionist “Christians United for Israel” is led not a Christian—but by a Jewish extremist named David Brog!

– In February 2014, DavidDuke.com announced that Jewish Supremacists have started complaining about Dr. Duke’s increasing influence and his success in getting the term “Jewish Supremacism” into the mainstream—to the point where that term was used by the Presbyterian Church’s booklet on Israel!

– In March 2014, we explained how the annual “American Israel Political Action Committee” (AIPAC) conference in Washington DC once again underlined how Jewish Supremacists control all parts of the establishment’s political spectrum in order to maintain support for Israel.

– In April 2014, we dealt in detail about how Gentiles are forced to pay extra for their groceries because there is a special EXTRA tax paid to Rabbis in what has become known as the “kosher food racket.”

– In May 2014, we reported on Dr. David Duke’s appearance on worldwide Press TV in which he exposed Israeli terrorism and treachery against America.

– In June 2014, we exposed how the nightmare Islamic State takeover of large parts of Syria and Iraq is the direct result of the Zio-plot to disrupt and destroy Israel’s enemies in the Middle East—even if it costs more American lives.

– In July 2014, we reported on the sensational new video released by Dr. David Duke over the Zionist mass murder campaign in Gaza—a video that went viral all over the world!

– In August 2014, we followed this up with the news of Dr. Duke’s documentary on Israeli Genocide in Gaza, another video which went viral.

– In September 2014, we reported on how leading medical professionals from around the world published an open letter in the Lancet magazine, condemning Zionist terrorism—and of the uproar which followed when it was revealed that the letter writers had endorsed Dr. Duke’s sensation “CNN, Goldman Sachs and the Zio-Matrix” video—which attracted over three-quarter of a million views on YouTube as a result!

– In October 2014, we reported on how the Zio-media always attacks what it calls “white privilege”—but in fact the rea racism in America today is Jewish privilege and Jewish racism!

– In November 2014, we reported on Dr. David Duke’s republishing of the 100-year anniversary edition of Jack London’s classic Mutiny of the Elsinore, and

– In December 2014, we reported extensively on the Jewish war on Christmas and the incredible hypocrisy of celebrating Hanukah in public places in America—which celebrates Jewish racial purity—while all Christian symbols are banned from public places!

These are just some of the hundreds and hundreds of stories, breakthroughs, and tremendous activist undertakings achieved by DavidDuke.com in 2014. All of this is only possible because of your help and your support.

Thank you all once again, and let us look forward to another year of success and victory over the greatest threat to world peace: Jewish Supremacism.