The now-completed annual “American Israel Political Action Committee” (AIPAC) conference in Washington DC—billed by its organizers as a “record event”—has once again underlined how Jewish Supremacists control all parts of the establishment’s political spectrum in order to maintain support for Israel. 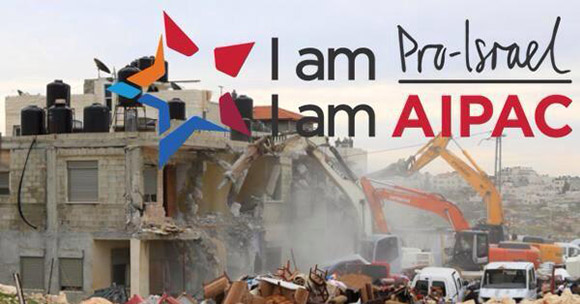 This complete control—which a new article in the Jewish Telegraphic Agency (JTA) coyly describes as “comity”—means that no matter which part of the political spectrum politicians are from, and no matter what minor differences in approach or policy they might have, at the end of the day, they are all pro-Israel.

“You’ve got your rousing church choir, your multi-denominational trio of rabbis quoting Torah, your montages of Israelis and Palestinians coming together and, above all, your pleas to please, please, please be nice to one another.

“That was the resounding theme of this week’s annual AIPAC Policy Conference in Washington.”

The JTA article goes on to say that in the wake of the defeat of AIPAC’s attempts to scuttle the latest round of talks over Iran’s non-existent “atom bomb”—a move which failed because enough people saw through the Jewish Supremacist lies, thanks to the Internet—“AIPAC’s traditional emphasis on Israel as a bipartisan issue has taken on added urgency.”

“We must affirm bipartisanship in our own ranks if we want support for Israel to be championed by Democrats and Republicans alike,” Michael Kassen, AIPAC’s chairman, said at the conference’s outset on Sunday. “AIPAC’s political diversity is critical to our continued success.”

The article adds that the next two immediate targets for the Jewish lobby are:

1. Seeking signatories for letters from lawmakers in both chambers asking Obama to make sure that Iran complies with the nuclear inspection and verification regimes mandated by the U.N. Security Council; and

2. Advocating a bill that would “enhance” security assistance to Israel. This bill has been delayed because of the outrageous demand contained in its clauses which gives Israeli citizens visa-free access to the US, while at the same time denying that right for American citizens coming to Israel.

Next Post Jewish involvement in the transatlantic slave trade a “canard?”