By Dr. Patrick Slattery — On his daily radio show today, Dr. Duke discussed the “canard strategy” by which the Anti-Defamation League tries to quash discussion on accusation of Jewish anti-social behavior by labeling the topic a canard, something that is so blatantly false that no discussion is needed.

Dr. Duke referenced a Wikipedia page on anti-Semitic canards. The Israeli government and Jewish organizations in the diaspora have actively trained people to wage a Hasbara (PR or propaganda) war on Wikipedia and other internet sites, and Wikipedia’s anti-semitic carard page shows the results:

“Anti-Jewish propagandists have tried to exaggerate the role of Jews in Atlantic slave trade. In the 1490s, the Jews were expelled from Spain and Portugal, at the same time that trade with the New World was opening up, leading to their participation in Atlantic trading in general, and the Atlantic slave trade in particular. Jewish participation in the slave trade was significant in Brazil, Curaçao, Suriname, and Rhode Island, but otherwise was modest or minimal, and Jews had virtually no role in the slave-trading of Britain or France.” 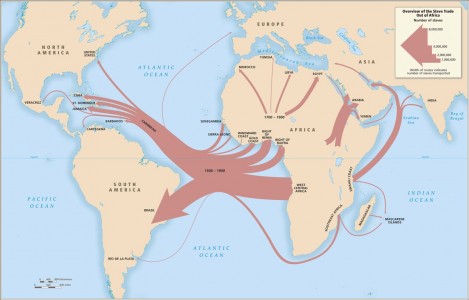 What a statement! First of all, Brazil had the largest slave population in the New World, and Rhode Island was the center of the North American slave trade. So it would be like saying that African American participation in professional sports is significant in football, basketball, and baseball, but otherwise is modest or minimal.

But, contrary to the Wikipedia entry, Jewish participation in the slave trade outside Brazil and Rhode Island was anything but modest or minimal. Judging from the location of the earlist synagogues, it seems that not only were Jews heavily involved in the slave trade, but that the slave trade was the main reason that Jews started coming to the New World.

If Jews came to the New World for religious freedom or to escape anti-Semitism, why would their early synagogues only be in slave trading centers? Take a look at this from Wikipedia’s list of the world’s oldest synagogues:

The 3rd oldest synagogue in the Western Hemisphere was in St. Thomas, US Virgin Islands

Notice that, with the exception of Argentina, all of these places were slave trading centers, and that the first synagogue in Argentina did not appear until the end of the 19th century. The Wikipedia page on the oldest synagogues in the United States shows that most of them were in the slave trading centers of Newport, Charleston, and Savannah. All this goes to show that when the ADL uses the term “canard,” it simply means “history that we don’t want the goyim to talk about.”