Commentary by Dr. Patrick Slattery — In recent months there has been an amazing ramp-up in anti-Russian propaganda of a degree not seen since the bad old days of the Cold War. First our Zio-media was spewing anti-Russian slander regarding its “anti-gay” legislation. I could not find any actual translation of the legislation in the Zio-media, but a Russian gay rights group has a full translation here. The wording of the legislation is certainly much tamer than one would have expected given the media uproar. It simply equates “information
that is promoting non-traditional sexual relations” with pornography with regards to dissemination to children.

However, how is it the business of outsiders to dictate to Russians how to encourage the healthy development of their children, especially when our own Zio-media promotes all manners of unhealthy behaviors to our own children, much to the consternation of parents and doctors?

Yet it seems that we crossed the threshold of a new Cold War over just this issue. Just in time for a crisis in the Ukraine that to a large extent was cooked up in Washington. With a parade of pundits, academics, and other experts being marched through the Zio-media in recent weeks spewing anti-Russian propaganda, RT, a Russian government-sponsored news organization, has published some background it feels people in the Zio-controlled west are not hearing.

Obviously RT has its own bias, but a bit of independent fact checking should readily confirm most of what the following article claims. It is worth a read, especially seeing as this issue is not about to go away anytime soon. -ps 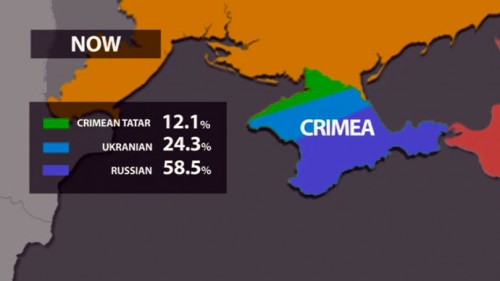 With its multinational society and a long history of conquests, the Crimean Peninsula has always been a crossroads of cultures – and a hotbed of conflicts. Amid Ukrainian turmoil, every ethnic group of Crimeans has its own vision of the region’s future.

Now known as Autonomous Republic of Crimea, the picturesque peninsula shooting out into Black Sea from mainland Ukraine was for centuries colonized and conquered by historic empires and nomadic tribes. Greeks, Scythians, Byzantians and the Genoese have all left traces of their presence in Crimean archeological sites and placenames.

The Russian Empire annexed the territory of Crimea in the last quarter of the 18th century, after a number of bloody wars with the Ottoman Empire.

As part of the 1774 Kuchuk-Kainarji peace treaty

the Crimean Khanate, previously subordinate to Ottomans and notorious for its brutal and perpetual slave raids into East Slavic lands, aligned itself with Russia. Soon Empress Catherine the Great abolished the Crimean Khanate, giving them a historic Greek name of Taurida.

Soviet citizens got to know Crimea as an “all-Union health resort,” with many of those born in the Soviet Union sharing nostalgic memories of children’s holiday camps and seaside.

Who lives there now?

The majority of those living in Crimea today are ethnic Russians – almost 1,200,000 or around 58.3 percent of the population, according to the last national census conducted back in 2001. Some 24 percent are Ukrainians (around 500,000) and 12 percent are Crimean Tatars. However, in the Crimea’s largest city of Sevastopol, which is considered a separate region of Crimea, there are very few Crimean Tatars and around 22 percent of Ukrainians, with over 70 percent of the population being Russians.