By Staff. Zionist extremists in America have on their media-monitoring sites described Dr. David Duke’s success in getting the term “Jewish Supremacism” into the common parlance as a “victory lap” after the term was “mainstreamed” by the main Presbyterian Church. 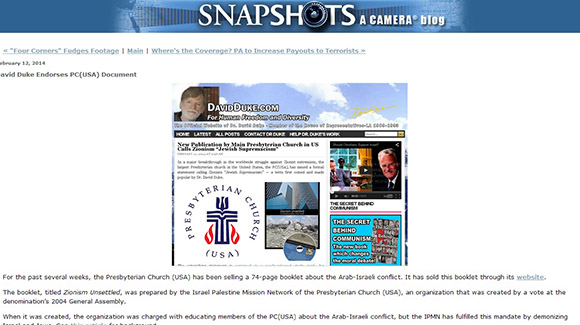 The Jewish extremist website CAMERA (“Committee for Accuracy in Middle East Reporting in America”)—which, despite its name, is just a Zionist pressure group designed to bully independent journalists—recently ran an article with a screenshot of Dr. Duke’s website article on the Presbyterian Church issue.

The article on the CAMERA site boasted that they had previously already brought pressure to bear on the PC(USA) over the IPMN’s lack of subservience to the Zionist agenda—making the now by usual claim that any honest assessment of Zionist excesses against Palestinians was “anti-Semitic.”

CAMERA then added that it appeared as if their pressure had in this case been unsuccessful:

“At one point, after receiving a complaint from CAMERA about the organization’s anti-Semitic messaging, a PC(USA) official in Louisville said the denomination was going to issue a set of rules that the denomination’s mission groups would have to follow if they want to stay a part of the PC(USA), but apparently, nothing ever came of these rules.”

CAMERA then went on to complain about the Zionism Unsettled booklet because it had “gotten two ringing endorsements. The first came yesterday from PressTV, the state television network of Iran.

The second came from David Duke,” CAMERA wrote, quoting from Dr. Duke’s article on the topic:

“In the article about Zionism Unsettled, Duke’s webpage reports the following: In a major breakthrough in the worldwide struggle against Zionist extremism, the largest Presbyterian church in the United States, the PC(USA), has issued a formal statement calling Zionism “Jewish Supremacism” — a term first coined and made popular by Dr. David Duke.

“This is what you could call a ‘victory lap. Duke’s … ideas have been mainstreamed by a mainline Protestant church,” CAMERA said, adding the obligatory word “hateful” into the sentence in a weak attempt to disguise the accuracy of the initial article.

CAMERA’s attempts to censor one of the larger Christian denominations in America and their desire to smear and attack anyone who exposes the Jewish extremist agenda, has once again been undone by the power of the Internet and the gradual spreading of the truth amongst all reasonable people of the world.