The US, UK and “Allied” governments are, through their continued support for the so-called “rebels” in Syria, directly in breach of the United Nations War Crimes statute—and the only reason this support continues is because those nations are doing Israel’s bidding.

In just one example of the sort of war crimes being committed by the “rebels”—who are backed, supplied and probably covertly being aided by US and UK forces—a new report by the “Human Rights Watch” organization has revealed that Syrian “rebel forces” killed at least 190 civilians and kidnapped more than 200 others during an offensive in the coastal province of Latakia in August. 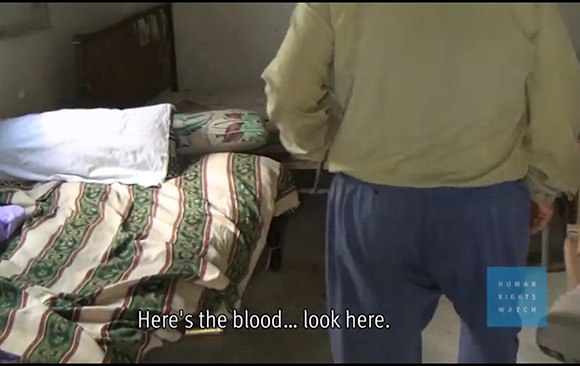 “These abuses were not the actions of rogue fighters,” Joe Stork, acting Middle East director at Human Rights Watch, said in a statement on the group’s website. “This operation was a coordinated, planned attack on the civilian population in these Alawite villages.”

Two opposition groups that took part in the offensive, the Islamic State of Iraq and Sham and Jaish al-Muhajireen wal-Ansar, are still holding the hostages, the vast majority women and children.

The findings of the Human Rights Watch report, as detailed in the must-watch video below, show that the killings, hostage taking, and other abuses are war crimes and crimes against humanity.

The opponents of the Assad government are clearly, and as the video shows, by their own admission, committing genocide against men women and children.

These groups—and those countries and their leaders, including America, that support them with arms—are guilty in terms of the UN convention of war crimes and crimes against humanity.

In terms of the Rome Statute of the International Criminal Court, which deals with war crimes, those parties which aid and abet organizations which commit such deeds, are just as guilty as the people who pull the triggers.

In other words, those who supply the weapons and make it logistically possible for these so-called “rebels” to commit these crimes, are accomplices in terms of international law.

The only reason why the US, the UK and other nations such as France, are supporting the rebels is because Jewish Supremacists and the state of Israel seeks the dissolution of the Syrian state.

This fact is openly admitted to by the Jewish Supremacists.

– The Jewish-owned Times of Israel has confirmed in a major article that “Israeli intelligence” is the major factor behind reports over the alleged use of “chemical weapons” in Syria and that there is already a senior Israeli “military team” in Washington DC “advising” the US government on the matter;

– The former head of Israel’s Military Intelligence and current director of the Institute for National Security Studies, Amos Yadlin has confirmed in a new study paper that it is “vital for Israel” that the Syrian government be toppled;

– An array of Jewish Supremacist organizations in America have come out openly in favor of war against Syria and have admitted that Jewish Lobbying is seen as the reason behind the War against Iraq;

– The Jewish Supremacist “American Israel Political Action Committee” (AIPAC) openly launched an all-out push to persuade US Congressman to vote in favor of war against Syria, as part of the decision by the Jewish lobby to openly align themselves with the pro-war faction; and

– In an article in the Jerusalem Post, the Director of the Global Research in International Affairs (GLORIA) Center, and editor of the Middle East Review of International Affairs (MERIA) and Turkish Studies, Barry Rubin, stated openly that “It is clear that Israel is neutral on the war, isn’t going to get dragged into it, and that the longer it goes on, the less it threatens Israeli national security.”

The evidence is clear-cut: the American government and its “allies” are guilty as accomplices to war crimes and crimes against humanity being committed by their proxy forces in Syria—all in support of Jewish Supremacist plans to destabilize the Middle East in Israel’s interests.

*Note to the Human Rights Watch video above: It states that there is “increasing sectarian warfare in Syria.”

It is worth stating that the only sectarian warfare being committed us by the “rebels” and not by the secular Syrian government.

Most Sunnis, almost all the Shiites and certainly all Christians in Syria support the government. In fact, the Sunni Grand Mufti of Syria supports the Assad government,

The sectarian nature of the conflict is exclusively coming from one side—the side supported by the Zio-puppet regime in Washington DC.