The Jewish-owned Times of Israel has confirmed in a major article that “Israeli intelligence” is the major factor behind reports over the alleged use of “chemical weapons” in Syria and that there is already a senior Israeli “military team” in Washington DC “advising” the US government on the matter.

The astonishing admission of just how blatant the Jewish Supremacists have become in controlling their sock-puppet regime in Washington DC was made in the article “Israeli intelligence seen as central to US case against Syria” published yesterday. 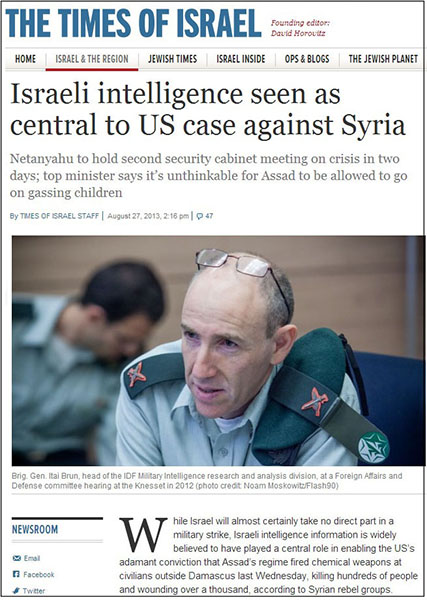 In the article, typical Jewish Supremacist chutzpah is employed along with the now standard Zionist hypocrisy over “human rights.”

The article quotes Israeli Minister of Economics Naftali Bennett, who sits on that country’s security cabinet, as saying that “It cannot be that less than 100 kilometers from Israel, children are being gassed to death and we let the world remain silent and ignore it.”

All this while Israel drops phosphorus and other weapons of mass destruction on children in Gaza, just 4 or 5 kilometers from Israel!  But in the world of Jewish Supremacy, their actions never count–it is only ever the despised goyim who are capable of committing crimes.

The article then goes on to reveal that “Israeli intelligence seen as central to US case against Syria” and that a “large delegation of senior Israeli security officials is currently in Washington holding talks with top administration officials led by US National Security Adviser Susan Rice.

The article went on to quote Giora Inbar, the former head of the IDF’s liaison unit in southern Lebanon, who said that the United States was “aware of” Israel’s intelligence on the doings of the Syrian regime “and relies upon it.”

Meanwhile, Russian president Vladimir Putin has pointed out that “Russia has no evidence of whether a chemical weapons attack has taken place in Syria or who is responsible.”

Once again, just like Iraq, it is a cabal of Jewish Supremacists who are behind the propaganda and the pro-war party. Will they succeed in dragging America and Britain into yet another war on behalf of Israel?

Previous Post “US Must Have Immigration, but Israel Not”—Leading Jewish Supremacist

Next Post U.S. Intervention in Syria Will Put America into Alliance with al-Qa’ida