The former head of Israel’s Military Intelligence and current director of the Institute for National Security Studies, Amos Yadlin has confirmed in a new study paper that it is “vital for Israel” that the Syrian government be toppled.

According to an article in the Jerusalem Post, Yadlin said that a “US strike on Syria will deter those contemplating use of unconventional weapons against Israel.”

According to the top Zionist intelligence officer, “it’s important for Israel that the US once again positions itself as an actor with strategic influence in the Middle East.”

What he actually means is that it is “important” for America to once again attack Israel’s enemies on behalf of Israel, so that his nation does not have to do it.

“Israel must avoid as much as it can being dragged into the Syrian civil war,” Yadin went on to state, emphasizing the point that he and his fellow tribalists want America to do the dirty work.

His remarks confirm an earlier assessment published by the Jerusalem Post, titled “The Region: How the Syrian civil war really affects Israel.” 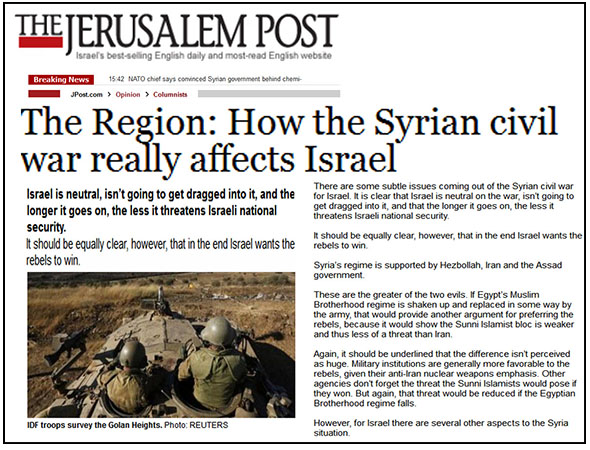 Written by Barry Rubin, the director of the Global Research in International Affairs (GLORIA) Center, and editor of the Middle East Review of International Affairs (MERIA) and Turkish Studies, the article asserts that “Israel is neutral, isn’t going to get dragged into it, and the longer it goes on, the less it threatens Israeli national security.

“It should be equally clear, however, that in the end Israel wants the rebels to win.”

In other words, Rubin is saying that it is specifically in Israel’s interests for the civil war to continue.

He goes on to point out that this conflict benefits Israel in a number of ways:

1. It allows them to keep control of the Golan Heights;

2. It keeps Hezbollah busy and prevents them from attacking Israel;

3. The emergence of a Kurdish national movement will split up a number of Arab nations, and that the incipient Kurdish nation wants “want good relations and commerce with Israel.”

4. The Syrian conflict might drive the Druse population into supporting Israel for their own safety; and

5. Iran will be weakened if Syrian government falls.

Next Post These Are the People Who Obama, Kerry, Cantor and Boehmer Want You to Support