The ongoing Zio-media lynching of Republican Rep. Steve Scalise over a meeting he allegedly addressed 12 years ago has provided a textbook example of how the Jewish Supremacist-controlled mass media lies, deceives and slanders anyone who does not slavishly follow the Jewish Lobby’s control of Washington DC. 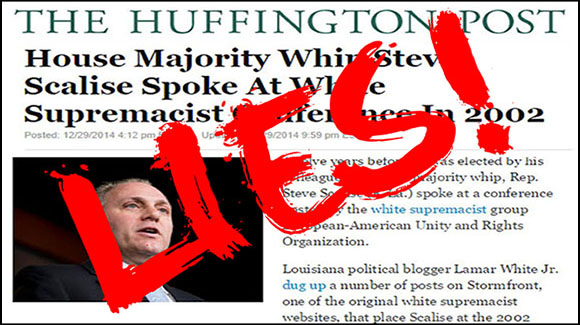 In fact, Dr. David Duke is not a “White supremacist” and he does not preach “hate.” As anyone can discover on this website and in his thousands of lectures and books, as well as in daily radio show, Dr. Duke clearly and condemns “White supremacism” and any other kind of supremacism, oppression or exploitation against any people. Read his core doctrine and principles in his A New Paradigm for True Human Diversity and Freedom on this site.

In fact, in his lectures, he shows how the controlled media in America is force that actually fosters racial hatred in America. It tries to foster hatred against European Americans, hatefully collectively condemning European Americans as racists, a word so negatively charged that is comparable to calling someone a witch in the middle ages. He shows that greatest harm to African Americans including the danger of being shot, assaulted, raped or hurt, is overwhelmingly from fellow African Americans.

Furthermore, Dr. Duke shows how the Zio Hollywood media is responsible for promoting the gangsta mentality in African Americans and significant sector of European Americans., pro-violence, pro-drugs, pro- sexual abuse and degradation. The result millions more Black young people who have been imprisoned, addicted to drugs and the horrific harm of a once vibrant family structure in the Black community.

Dr. Duke also has pointed out that sectors of the Zio controlled media have tried to blame black Americans for the riots and anger against white Americans, when the Zio media has been the real inciters of hatred and even violence against against white people and white police in America.

Finally, the attack on Dr. Duke and Rep. Scalise is completely hypocritical.

The President of the United States of America, Barak Obama, has for a lifetime supported his radical, racist preacher, Rev. Wright who has literally screamed “God damn America” and spouted the most vicious hatred against white people!

But the Zio mass media does not condemn Barak Obama for maintaining his close relationship with Wright to this day!

The truth is that Dr. Duke shows how the establishment fosters hatred between both groups in a divide and conquer strategy that harms both African Americans and European Americans, and diverts attention from the real controllers of the media , the trillions stolen from both blacks and whites by the international Zio bankers such as Goldman Sachs and the FED.

The establishment which has spent trillions of dollars needed by both blacks and whites—in insane Zionist Wars such as war in Iraq, fought only for the interest of Israel.

Zionists also control the politics of the United States domestically, and the real reason they have attacked Scalise is because he said he endorsed Dr. Duke’s policies. They are afraid he might might someday spill the beans on the Zionists because he may have dared to to speak at meeting where Dr. Duke spoke. And remember that the keynote speech Dr. Duke made at that meeting was primarily about the organization’s opposition to the insane Iraq War—which was vociferously supported by the Zio media and government.

And that is why the media lies about Dr. David Duke, and why they scream the lie that he supports “racial supremacism” and “hate.”

The real reason they hate Dr. Duke is simply because he stands in support of European Americans, Africans Americans, the Palestinian people, and all the people of the world who oppose the crimes of the real ultra-racist nation of planet earth, the Zionist Israeli state. Of course, the murder and ethnic cleansing of 600,000 Palestinians has only been possible because of the Zionist control not only of what was Palestine, but of the Western media, banking and politics, and thus their control of the Western World.

The Zionist policies have not only resulted in the death of millions overseas, but great harm to hundreds of thousand of Americans and Europeans. This is the real racist power that all races and people of good will must unite to defeat.

That’s why the Zionist media and government tyrants seek to defame and lie about Dr. David Duke and Rep. Scalise!

Now let’s go over the lies of the media in directed at Steve Scalise for possibly meeting with his constituents—constituents who also supported David Duke. Remember that  Dr. Duke received over 60 percent of the popular vote in the Scalise’s district. They voted for Dr. Duke to be their U.S. Congressman, and a year later, to be their Governor.

The media attack is not against Dr. Duke and Rep. Scalise but also against the millions who support Dr. Duke in Louisiana, the United States and all over the world–to which the millions of views of his videos provide evidence.

As Dr. David Duke has repeatedly pointed out in a number of radio shows on the topic, the facts are quite clear:

That is the sum total of the facts.

There is therefore, no evidence at all indicating that Rep. Scalise shares the views of Dr. Duke or anyone else even remotely linked to EURO—even if he did attend what to him would have been a perfectly normal “meet his constituents” meeting, just like any other politician would accept invitations from the public to present his or her views.

After all, what the Zio-media is actually saying is that Rep. Scalise is not allowed to meet with his own constituents! How is that “democracy”? Since when did it become a crime for a Congressman to meet constituents?

So why then the media fuss over Rep. Scalise?

Would the media make the same fuss if Rep. Scalise had spoken at a La Raza Hispanic advocacy meeting?

Would the media make the same fuss if Rep. Scalise had spoken at a AIPAC Jewish lobby advocacy meeting?

Of course not—even though both those above-mentioned organizations are openly committed to promoting their own racial groups’ agendas….

Even President Barack Obama can address La Raza, post the video on the White House website, and the Zio-media will ignore it.

So why they the fuss over Rep. Scalise allegedly addressing a small meeting of European-American rights advocates?

Especially if there is, as he himself said, there is no real evidence that he even knew it was a European-rights advocacy group—unlike what Obama can claim about La Raza—an organization whose name translates as “The Race”  !

The answer to this question lies, of course, in the fact that Dr. Duke is the world’s leading opponent and exposer of Jewish Supremacist racism—and although the Zio-media tries to ignore him, or continuously slander him, the internet has undermined all their efforts to control the news and what people can read, see and hear.

Dr. Duke reaches millions of people through his videos, through his website, his books, and his lectures—from all parts of the world. He has spoken in America, Europe, the Middle East and Africa—and some of his largest video viewing bases have been in Asia.

His worldwide appeal and following by itself disproves the Zio-media lies about him, and show that the only true racists in the world are the Jewish Supremacists, who, through their control of the mass media, spew out hatred and bile against anyone who dares to stand up to them.

Rep. Scalise, although being fanatically pro-Israel and bowing down before the Jewish lobby, has made one single mistake: and that is that he allegedly dared to speak in front of a meeting of Europeans! Shock! Horror!

For this “crime” the Zio-media has decided to lynch him—without any evidence, without the slightest justification—and in blatant contradiction to their treatment of all senior politicians who regularly prostrate themselves before Jewish Supremacist lobbies such as AIPAC.

For this reason, and this reason alone, they seek to stamp on anyone who has even the slightest, most improbable and unlikely connection with Dr. Duke—and in this case, their sacrificial lamb is the totally innocent Rep. Scalise.

Even more astonishing is the fact—openly admitted by the New York Times—that the issues upon which Dr. Duke campaigned in the time period over which the media-created uproar supposedly goes, namely anti-affirmative action, welfare reform, anti-big government and anti-tax, have all become “mainstream” in Louisiana! And yet, the Zio-media still seeks to lynch Rep. Scalise! 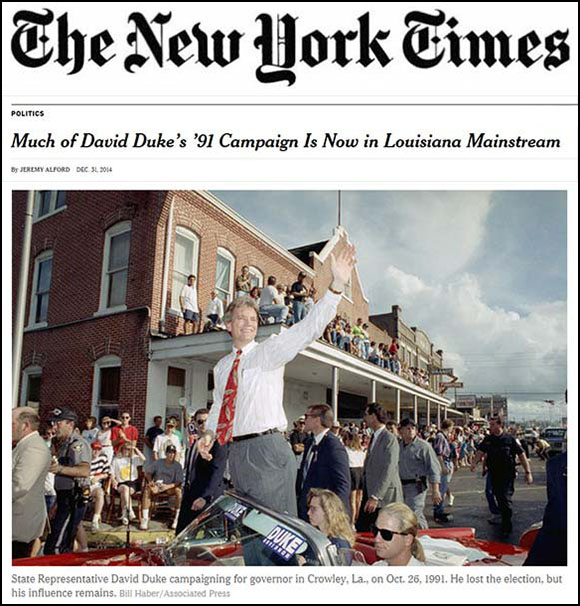 Finally, as all readers of this website, all listeners to Dr. Duke’s radio shows, the millions of people who have viewed his videos and have read his books—all of them know that he is not a “white supremacist” or a “racist”—but instead passionately campaigns against all racism, all hatred, all bigotry and all intolerance.

Fortunately for all the lovers of truth and freedom in the world, fortunately for all the honest people of the globe, the internet provides the single greatest weapon against the Zio-terrorists who seek to control what “news” and “information” people can read, see or hear—and there is no doubt that the internet will see the breaking of racist, Jewish Supremacism, for once and for all.