By Dr. Patrick Slattery — The controversy over incoming House Majority Whip Steve Scalise alleged attendance at a meeting a dozen years ago of the EURO organization founded by Dr. David Duke is having some interesting fall out. Some mainstream news organs carried transcript exerts from Dr. Duke’s radio show of December 30, including criticisms of Zio-rap diva Nikki Minaj based on research I presented last month. These exerts were then reported on by the hiphop website Hiphop DX. 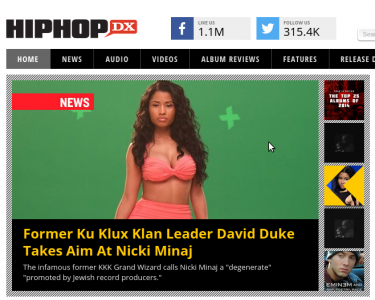 Following the lead of the mainstream media, Hiphop DX refers not to former “Representative David Duke” or “Dr. David Duke” or “human rights activist David Duke,” but “former KKK leader David Duke.” Otherwise, however, the article is a faithful representation of thoughtful comments made by Dr. Duke on the show. Moreover, the comments posted by the websites mainly African American readers were overwhelmingly in agreement with Dr. Duke’s statements, even if they did reflect the slanderous propaganda that has been aimed at Dr. Duke by the Ziomedia over the decades.

One of the few criticisms lodged at Dr. Duke asked why he singled out Nikki Minaj as opposed to Miley Cyrus. Of course, we did discuss Miley Cyrus’ disgusting appearance at last year’s Grammy awards, and Dr. Duke has repeatedly called out other white divas of Zio-record industry, from Madonna to Lady Gaga. The reason that Nikki Minaj has been a topic on our radio shows lately is that a recent article by the Jewish Telegraphic Agency slammed one of her extremely obscene videos not for the damage it will cause to its youthful audience but rather to some vague “Nazi imagery.”

Of course, the real object of Dr. Duke’s scorn is not Miss Minaj or the other pornographic divas — be they black or white — but the Jewish-dominated record industry, which choses to promote filth and degeneracy and has the market power to shape the tastes and culture of our mailable youth. And as you will see below, more than a few black hiphop aficionados agree with Dr. Duke’s assessment.

The fact is, despite the efforts of the Zio-media to portray him as a “white supremacist,” Dr. Duke’s concern for humanity is not confined to his own European heritage, but extends to all races. The preservation and self-determination he wants for the European people is something that he would never deny to any other people.

(See the article and comments here.)

Previous Post The Steve Scalise Lynching: A Textbook Example of how the Zio-Media Lies