By Staff—Every single one of Dr. David Duke’s predictions and analyses of the cause of the wars and conflicts in the Middle East over the past two decades and more—namely, the Zionist Supremacist control of the US Government and the Jewish racist tribalist state of Israel—has been proven correct, a review of his writings, speeches and videos has shown.

Starting with the events which led up to the attacks of September 11, 2001, Dr. Duke predicted in August 2000 at a meeting in New Orleans that Jewish Supremacist control of America’s foreign policy would bring “terrorism comes to our own shores with a vengeance.”

Dr. Duke went on to say—and remember, this was in the year 2000—that ““Americans will go to endless wars. We will die or be maimed by the thousands.

“Our economy will be bankrupted; the rest of our freedoms will be taken away in the name of security.

“America under this nefarious control will behave like third world regimes and kidnap and torture suspects. America will adopt all the brutality that we always despised in the Communists, because the Neocons, actually are at root, Trotskyites not Conservatives.” 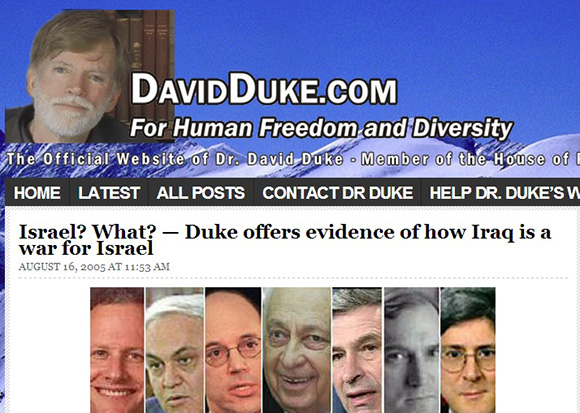 Everything Dr. Duke predicted came true: terrorism came to America, Americans went to war in Afghanistan and Iraq, thousands of American boys and girls were killed and injured fighting in those wars, the economy was destroyed by the billions spent, and the “Patriot Act” was introduced in the name of “national security” to rip away American freedoms.

All of this was done, as Dr. Duke pointed out, at the behest of a small clique of radical Zionist Supremacists who even plotted out the course of events some years earlier—the Israeli The Institute for Advanced Strategic and Political Studies (IASPS) think tank’s ““A Clean Break: A New Strategy for Securing the Realm” paper released in 1996.

Then, one year after the attacks of 9-11, Dr. Duke reviewed the attack and its causes in an article titled “One Year Later: 911” as follows:

“It was not an unprovoked attack: Israel and its control over American foreign policy was the primary reason for this terrorism against America.

“The attackers committed these horrendous and murderous acts motivated by revenge against America for support of Israel and Israel’s terrible crimes against the Palestinians, the Lebanese and other Mideast peoples.”

In 2003, Dr. Duke pointed out, in an article titled “How Israeli Terrorism & American Treason Caused the September 11 Attacks”, the

“real reason we have suffered the terrorism of the WTC attack is shockingly simple. Too many American politicians have treasonously betrayed the American people by blindly supporting the leading terrorist nation on earth: Israel.”

The accuracy of Dr. Duke’s position has now been confirmed by a large number of independent sources., For example, in 2005, Dr. John Mearsheimer, co-author of the book The Israel Lobby and U.S. Foreign Policy, said that

“The Israel lobby was one of the principal driving forces behind the Iraq War, and in its absence we probably would not have had a war.”

Speaking at a forum organized by the London Review of Books, Mearsheimer added that the “animus to the United States stemmed from U.S. foreign policy toward Israel.”

Dr. Duke was however the only U.S. political figure at the time who warned in public that the Jewish Lobby was the cause of not only the terrorism which struck America, but also the resultant wars into which the Zio-fanatics stampeded their puppets in Washington.

This fact was known to the Jewish Lobby—and, as confirmed in Newsweek magazine of November 2002, where it was reported that the U.S. State Department threatened the Al-Jazeera network with suspension of their credentials if they dared interview Dr. Duke on the topic (Newsweek, Periscope, November 2002). 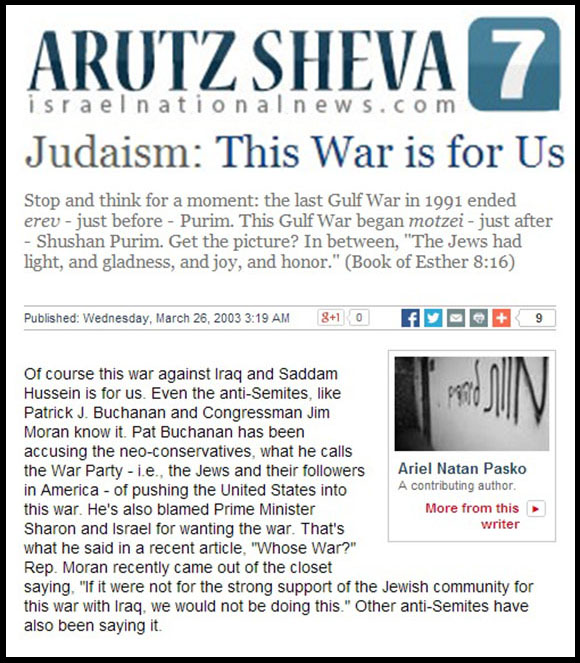 But in Israel, the Zio-fanatics were quite open about the cause of the Iraq war. The  Israel National News, (Arutz Sheva), openly stated in 2003 that:

“Of course this war against Iraq and Saddam Hussein is for us. Even Patrick J. Buchanan and Congressman Jim Moran know it. Stop and think for a moment: the last Gulf War in 1991 ended erev—just before—Purim. This Gulf War began motzei—just after—Shushan Purim. Get the picture? Read the Purim story in Megilat [Old Testament book of] Esther again? Haman, the proto-typical anti-Semite, plans mass murder of the Jews and in the end pays with his life, the life of his ten [innocent] sons—all hanged—and the Jews kill 75,800 members of the anti-Semitic—i.e. Nazi—party of the time” (“This War is for Us,” Arutz Sheva, March 26, 2003).

Dr. Duke went on to point out that the war in Iraq was created, energized and put into effect by a tightly-knit lobby of ultra-Zio-fanatics now known as neo-cons.

At the time, Dr. Duke was a lone voice in America sounding the alarm about the neo-con’s war plans—but, as has now been admitted even by Carl Bernstein and other Jewish journalists, the Jewish Lobby was indeed behind the push to war, just as Dr. Duke said.

Journalist Admits: Dr. Duke “Ahead of the Curve”

Years ago, a hostile but honest journalist, Maria Mathews, writing in The Times Blog, even went as far as to admit that Dr. Duke was “a prophet on some of the biggest issues of the day” after Dershowitz smeared Walt and Mearsheimer.

Despite the overall tone of Mathews’ article being negative, she had the courage to write:

Does anyone really believe Bush when he said Al Qaeda attacked America because they hate Democracy?

Before the Iraq War Duke pronounced repeatedly in the world’s media, including a stint on Al Jazeera (which according to Newsweek  Periscope Section) the U.S. State Department tried to prevent, that Saddam had no weapons of mass destruction, no ties to Al Qaeda, no nuclear weapons program. He predicted the war would not be a “cakewalk,” cost many times more than Neocon predictions, and do nothing but fuel hatred and terrorism around the world. Far from fighting terrorism, the war would only foment it, said Duke.

His crystal ball worked on that one.

A recent American poll now says that only 30 percent of Americans support the war and most Americans think the war in Iraq will only increase terrorism around the world.

Perhaps no American politician has spoken so forcefully and for so long against the power of the American Israeli Lobby.

He said long before almost anyone else on the political scene that the Iraq War was “a war for Israel” and not in the interests of the United States.” Because Americans wouldn’t pay the horrendous cost of blood and money in a war for Israel, he argued that the lie of “weapons of mass destruction” was necessary to convince Americans that they were in danger from Iraq.”

Just recently, a dean at the most prestigious school of government in the United States, the John F. Kennedy School of Government at Harvard University, issued a paper titled “Israel and U.S. Foreign Policy.” In it they say what David Duke has been saying for years: that the Israeli lobby controls American foreign policy to the detriment of the United States and that it orchestrated the Iraq War.

In effect, the pro-Israeli critics have not dimmed the academic stars of the Harvard researchers by pointing out that David Duke was way ahead of the curve on the issue. All they have done is to make David Duke’s dubious star shine more brightly, and that is a dangerous achievement. How many fringe political personages can claim to be ahead of the curve of America’s most prestigious university?”

Alan Dershowitz on MSNBC’s Scarborough program,pointed out that Mearsheimer and Walt’s assertions were longpredated by Dr. David David  he suggested the paper had been taken form vaious “hate sites.”: “every paragraph virtually is copied from a neo-Nazi Web site, from a radical Islamic Web site, from David Duke’s Web site.”(Dershowitz, Alan. “‘Scarborough Country’ for March 21”, MSNBC, updated March 22, 2006, accessed November 20, 2010)

It was the same with Iran: while the Jewish Supremacists and their puppets told the world that that nation had an “atom bomb” and was going to blow up the world, Dr. Duke took the lead in repeatedly explaining how it was impossible for Iran to have an atom bomb.

Once again, all of Dr. Duke’s claims have been proven completely accurate: no-one, apart from the Zio-liars and the few deluded and uninformed fools who they have tricked, actually believes the Iran “atom bomb” lies any more.

Dr. Duke also was one of the first politicians to point out that supporting the “rebels” in Syria against the Asaad government would inevitably lead to America backing the very sort of Islamist extremists who had attacked America on 9-11. 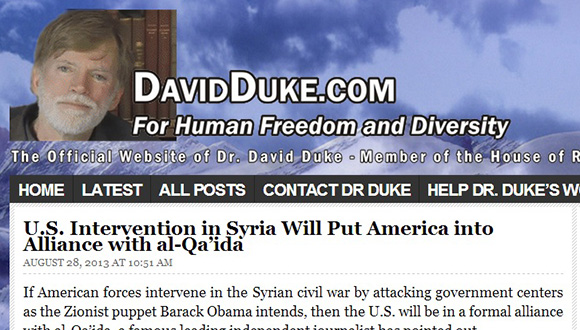 In an article published in August 2013, Dr. Duke warned that “If American forces intervene in the Syrian civil war by attacking government centers as the Zionist puppet Barack Obama intends, then the U.S. will be in a formal alliance with al-Qa’ida.”

Furthermore, Dr. Duke predicted that the promotion of chaos in Syria was in no-one’s interests except that of Israel, and to back this up he quoted several leading Israeli movers and shakers who openly said that “instability in Syria best serves Zionist interests.” 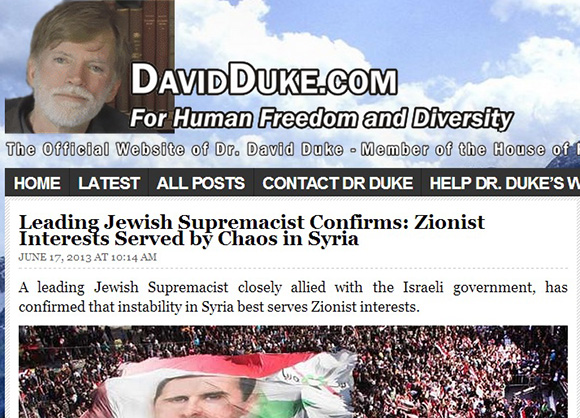 Dr. Duke also pointed out an article which appeared in the New York Times which quoted Alon Pinkas, a former Israeli consul general in New York as follows about the “civil war” in Syria:

“This is a playoff situation in which you need both teams to lose, but at least you don’t want one to win — we’ll settle for a tie. Let them both bleed, hemorrhage to death: that’s the strategic thinking here. As long as this lingers, there’s no real threat from Syria.”

And exactly what Dr. Duke predicted has come to pass once again: by backing the Syrian “rebels,” the US government has ended up arming ISIS, which now threatens not only Syria, but Iraq as well. 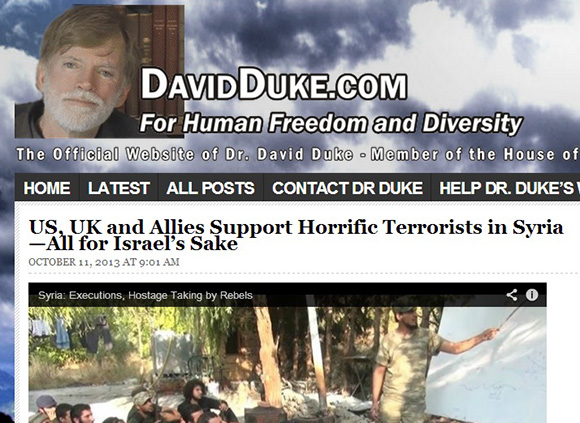 Dr. Duke has, in his well documented words in both print and voice, has not only consistently been “ahead of the curve,” but has also been one of the most consistently correct political figures in America’s history.

How long will it be before the American public realize that his most recent prediction—namely that there will never be peace until the power of the Jewish Supremacist lobby is broken forever—is also true?

Next Post Hear Dr. David Duke on How an Understanding of Jewish Supremacy Allows him to Accurately Predict Events