The Jewish Supremacist media’s coverage of the illness of Jewish “comedian” Joan Rivers—which consists exclusively of praise and celebrity endorsements, while ignoring her hate-filled and pro-murder comments about Palestinians—serves as yet another classic textbook case of hypocrisy and racist Jewish tribalism.

Rivers, 81, who is, as this article was written, in a medically induced coma after stopping breathing during throat surgery, has long been a media darling and has been widely promoted by the Jewish Supremacist controlled press for four decades, despite her “humor” most often consisting of vulgarities and insults.

The reason for her endless promotion is, of course, the fact that she actually is Jewish, and was born with the name Joan Alexandra Molinsky, the daughter of Russian Jewish immigrants.

It was therefore no surprise to informed observers when Molinsky spewed typical Jewish racist supremacist hate and venom against the Palestinians at the height of the most recent Israeli attack on the civilians of Gaza. 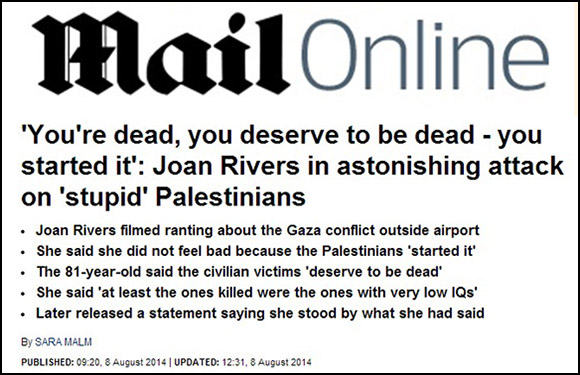 When asked about the Gaza Holocaust, Molinsky told a TV interviewer that she did not feel bad because civilian victims “deserve to be dead”, that the ones killed had “very low IQs.”

There was, of course, no media condemnation for her hate-filled outburst, even though the Israeli “forces” killed hundreds of babies, children and non-combatants when they attacked Gaza.

Now that she is seriously ill, the same media is full of sympathetic stories on her illness, and even repeats all manner of (mainly Jewish) celebrity endorsements (for example, from Bette Midler, Courtney Love Cobain, and so on) praying for her to recover.

The Jewish Telegraphic Agency (JTA) even went as far as publishing a headline piece “Wishing Joan Rivers  Speedy Recovery” and wishing her a “refuah shlemah”—a Jewish prayer for recovery in the name of God. 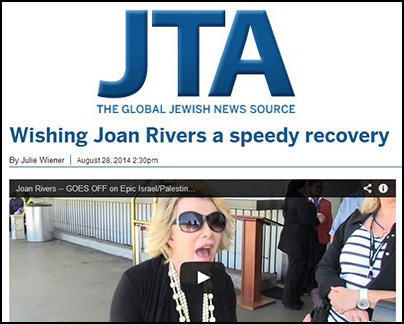 Consider for a second what these same media outlets’ coverage would have been had any other person made comments in public to the effect that Jewish civilians “deserve to be dead”, and that the Jews killed had “very low IQs.”

What would the media’s reaction have been to anyone—say a Palestinian—who declared about Jews in occupied Palestine that “They were told to get out. They didn’t get out. You don’t get out, you are an idiot. At least the ones that were killed were the ones with low IQs.”

There would be no queues of “celebrities” lining up to endorse such a person either. . .

Once again, it is one rule for the Jewish Supremacists, and another for the hated Goyim.

* Please note that we here at DavidDuke.com do not wish illness or death upon anyone, Joan Molinsky included. This article only points out the disparity in coverage given to Molinsky as opposed to other people who are critical of Jewish Supremacy.

Next Post “David Duke Was Right about Zio-Wars”—How Events have Proven Every Dr. Duke Prediction Accurate