Tens of thousands of Jews in New York city have once again demonstrated their single loyalty to a foreign nation—for the fiftieth year in a row—during the annual “Celebrate Israel” parade through the city. 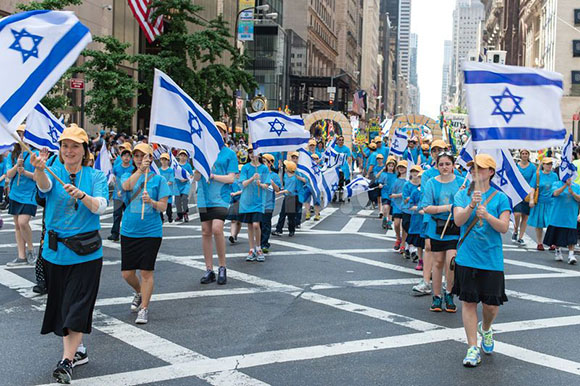 Unlike other festivals in America—for example, St. Patrick’s Day, which just celebrates a Irish cultural event—the annual “Celebrate Israel” march in New York City is specifically devoted to supporting a foreign state, and unites all the Jews in the city into a “patriotic” fervor centered exclusively on supporting the overtly racist, anti-Gentile, and Gentile-hating state of Israel.

According to reports, more than 40,000 Jews marched up Fifth Avenue in Manhattan in the parade which drew tens of thousands of supporting and cheering onlookers.

Aharoni said he felt honored to be participating in this “one-of-a-kind” event. “With 40,000 people marching and thousands watching, and the participation of Gov. Guomo and Mayor de Blasio, I’m honored to be accepting the love of New York on behalf of Israel.”

Incredibly, John Ruskay, CEO and executive vice president of UJA – Federation of New York, said in a statement that this was not a day for politics.

“For 50 years, tens of thousands . . . have marched up Fifth Avenue expressing their love for, and commitment to, the people and State of Israel. One day each year we put differences aside and come together to make clear: We stand with the people of Israel as they resist violence and in their pursuit of peace. That’s what the parade is about each year.”

Ruskay was obviously not referring to the extensive racial laws in Israel, which, for example, require DNA testing for would-be immigrants to ensure that that are racially Jewish, the law which prohibits non-Jews from marrying Jews in Israel, or the vicious anti-Gentile racist public statements from Israel’s political and religious leaders.

Ruskay was certainly not referring to Israeli Prime Minister Benjamin Netyanhu’s comment that blacks represent a “threat to Israel’s identity.”

Ruskay was also certainly not referring to the former Serphardic Chief Rabbi of Israel who lectured in that nation’s highest religious centers that Gentiles were “donkeys” made to serve Jews.

One of the Anti-Defamation League’s most common claims that is a canard that Jews have “dual loyalty” to Israel. In reality, as the “Celebrate Israel” march shows, there is no such “dual loyalty” but in fact only a determined single loyalty—to Jewish Supremacism and hatred of non-Jews. 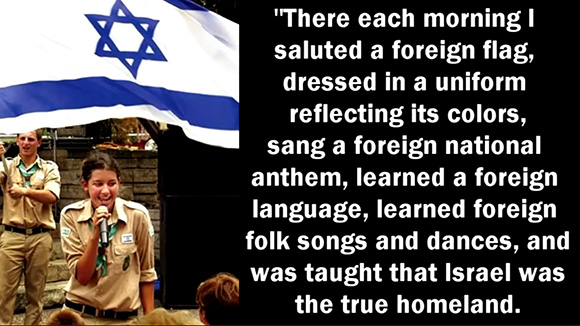 That this “canard” is actually true was confirmed by none other than Stephen Steinlight, a Jewish Supremacist who served for five years as the Director of National Affairs for the largest and most powerful Jewish organization in the United States, the American Jewish Committee.

Steinlight made the following remarks in an article on immigration in a national Jewish magazine in October of 2001:

“I’ll confess it, at least, like thousands of other typical Jewish kids of my generation, I was reared as a Jewish nationalist, even a quasiseparatist. Every summer for two months for 10 formative years during my childhood and adolescence I attended Jewish summer camp. There, each morning, I saluted a foreign flag, dressed in a uniform reflecting its colors, sang a foreign national anthem, learned a foreign language, learned foreign folk songs and dances, and was taught that Israel was the true homeland. Emigration to Israel was considered the highest virtue, and, like many other Jewish teens of my generation, I spent two summers working in Israel on a collective farm while I contemplated that possibility.

“More tacitly and subconsciously, I was taught the superiority of my people to the gentiles who had oppressed us.
“We were taught to view non-Jews as untrustworthy outsiders, people from whom sudden gusts of hatred might be anticipated, people less sensitive, intelligent, and moral than ourselves.” (Steinlight, S, The Jewish Stake in America’s Changing Demography: Reconsidering a Misguided Immigration Policy, Center for Immigration Studies, October 2001).