Jewish Supremacists always try to present Judaism as “just a religion”—but a newly-revealed row over Israeli Prime Minister Benjamin Netanyahu’s attempts to eulogize at the recently-deceased Gentile-hating Rabbi Ovadia Yosef have underlined the fact that religious belief is not the single defining element of being Jewish. 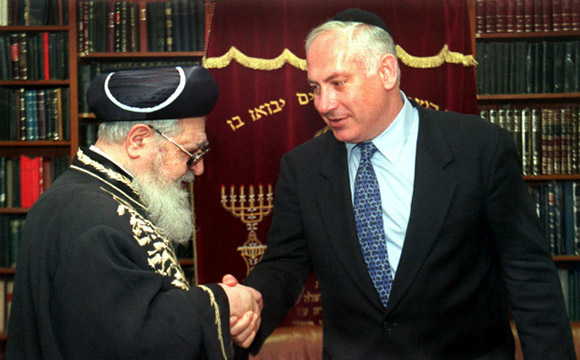 According to an article in the Times of Israel, an ultra-Orthodox Jewish news site reported that Netanyahu’s request to eulogize Yosef was prevented by members of the Hevra Kadisha burial services, who said that it was “unfitting” for a secular figure to speak about the deceased religious leader.

Netanyahu arrived at the Shamgar funeral home in Jerusalem only a short while after Yosef’s death last Monday. But when he requested permission to speak publicly of the rabbi, he was urged not to do so.

“Under no circumstances can a person who desecrates the Sabbath and consumes nonkosher meat eulogize this generation’s great leader — that will not happen,” an unnamed Hevra Kadisha member was quoted as saying.

The report said that Netanyahu accepted the burial service members’ demand and stepped outside the building in order to eulogize Yosef in front of TV cameras rather than in the funeral home.

A family member of Yosef, who spoke under condition of anonymity, told the news site that they had “a lot of respect” for the prime minister, but that a non-observant Jew should not be allowed to eulogize the “generation’s great rabbi.”

In other words, Netanyahu is not actually religious at all—but he is still very much Jewish and accepted as such by all of Israel and the world’s Jewish population.

By way of comparison: if the Pope announced that he no longer believed in God, or converted to Buddhism, no-one in the world would still regard him as a Christian.

Yet Jews can be completely irreligious, yet still fully accepted and recognized as Jews—evidence that the underlying tribal unity and thoughts are what creates Jewish Supremacism, rather than “merely a religion.”