One of the most commonly-used Zionist Supremacist tricks in media manipulation is to set up fake “think tanks” and “institutes”—all staffed by their tribal loyalists—who are then paraded by the controlled media as “independent experts” providing “unbiased commentary” to the general public.

In this way, the Zionist fanatics can secretly present their worldview to the unsuspecting public as “informed analysis” which they then hope will play a role in influencing “public opinion” and thereby keep non-Jews supporting Israel even though that latter country’s crimes against humanity are increasingly obvious.

The British BBC is a case in point. For example, on July 17, as part of its main news, the BBC broadcast an interview with one Davis Lewin, who was introduced by the presenter as “Davis Lewin, who’s from the Henry Jackson Society, a foreign and defense policy think tank.” 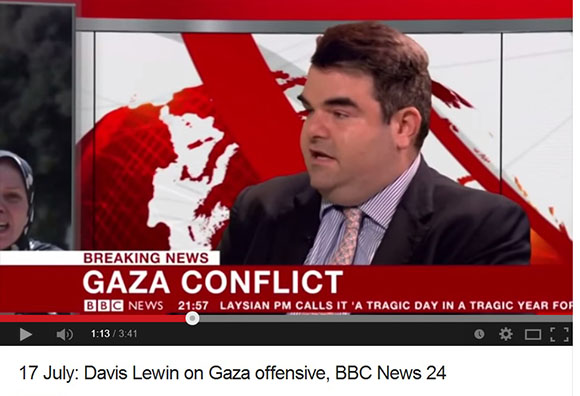 Lewin used the interview time to repeat all the lies which the Israeli government put out about their recent attack on Gaza—such as that it was Hamas who started the war, it was Hamas who are the aggressors and so on—when in fact the truth is all diametrically the opposite.

Viewers watching the interview—which can be seen here—could be forgiven for having the impression that this “objective observer” was simply stating the facts.

In fact, Lewin is just another undercover Jewish Supremacist, and extremely active in the Zionist conspiracy.

Firstly, the “Henry Jackson Society” is not some independent “policy think tank” but a blatant Jewish Supremacist front. Although nominally a British-based organization, its patrons include many of the most prominent and extreme Jewish fanatics from America, such as:

– Max Boot, a Russian Jew who is the Senior Fellow in National Security Studies at the Council on Foreign Relations;

– Carl Gershman, currently president of the National Endowment for Democracy, but earlier a research department of B’nai B’rith, and a member of the Governing Council of the American Jewish Committee;

– Max Kampelman, a retired U.S. diplomat most famous for being involved in the Jewish Institute for National Security Affairs;

–  William Kristol, infamous neocon who co-founded the Project for the New American Century (PNAC). He also serves on the board of the Emergency Committee for Israel.

– Robert Kagan, cofounder with Kristol of the Project for the New American Century;

– Clifford May of the Foundation for the Defense of Democracies. May was former director of Communications for the Republican National Committee and also Vice Chairman of the Republican Jewish Coalition.

– Richard Perle, the infamous Jewish Supremacist who helped push the US into the illegal, immoral and disastrous war in Iraq, on behalf of the Jewish Lobby.

– Joshua Muravchik, a board member of the Jewish Institute for National Security, and perhaps most infamous for his 2006 article in the Los Angeles Times simply entitled “Bomb Iran.”

From this, and the Henry Jackson Society’s staff list (which reads more like a Tel Aviv telephone directory) it can be seen that this “think thank” is anything but impartial.

Yet this is the body upon which the BBC draws for its “expert opinion” on Gaza and the Middle East. . . .

This tactic of using secret Jewish Supremacists to promote the Zionist position as “public opinion” is not a new tactic. In November 2012, for example, when the Zio-terrorist army was bombing Gaza, the BBC used one Jonathan Sacerdoti as a commentator four times in two days, presenting him each time as an independent expert.

Sacerdoti is also the prime mover and shaker behind another organization called “The Institute for Middle East Democracy” or IMED.

This organization claims on its website to “works with policy makers, analysts, the media and the wider public, to educate about the circumstances required to achieve and increase liberal democracy in the Middle East.”

IMED goes on to say that it “works through educational, research, social and media activities, to advance human rights in the Middle-East. We promote the equal treatment of minorities in the region (including religious, racial, gender or sexual minorities), aiming to highlight extremism and all forms of hate-crime.”

Of course, with the Zio-fanatic Sacredoti at its head, IMED never talks about Jewish racism, and the violently anti-Gentile and racist nature of Israel, which outlaws marriage between Jews and non-Jews, and which only allows Jewish immigration based on biological descent—or race.

IMED is strangely silent, for example, on the fact that Israel actually uses DNA tests to test potential immigrants to Israel to make sure they are Jewish.

A review of just some of these “policy briefs” shows the true and blatantly pro-Jewish Supremacist nature of IMED:

– “IMED Iran Policy Brief – Hope is just another four-letter word in nuclear talks”—in which the lie about Iran’s mythical atom bomb is repeated and sanctions are urged against that nation;

– “IMED Policy Brief: Fighting Assad’s Narrative”—in which it is claimed that all of the vicious murderers and terrorists attempting to topple the Syrian government are justified and that Basheer Assad is just a liar; and so on.

Despite all this blatant Jewish Supremacist propaganda, IMED proudly boasts on its website that it’s “experts” have been featured on the BBC, Sky News, Fox, The Telegraph, The New Statesman, The Huffington Post, and even Aljazeera.

In the pre-Internet age, the viewing public would have been completely unaware of the extent of the Zionist conspiracy to manipulate the news, not only though direct ownership of the media, but also through this presentation of Jewish partisans as “independent commentators.”

Thanks however to the Internet, their scheming and lies now lies exposed to the world.

See Dr. David Duke expose Blitzer on international television in 2006…Soon after Dr. Duke had pointed out that Blitzer was an AIPAC agent, Blitzer announced that the “satellite was going down….”