This “aid”—which is only possible because of the power of the Jewish Lobby which effectively controls Washington DC through a combination of lobbying, control of the mass media and election campaign funding—continues despite Israel being the most racist state on the planet, completely contrary to everything that America is supposed to stand for.

Israel is the world’s only openly racist state, with Jews-only immigration policies, DNA tests for immigrants, the outlawing of marriages between Jews and non-Jews to keep the Jewish bloodline pure, racially segregated housing and residential areas, the forcible expulsion of asylum seekers and illegal immigrants, and, of course, the decades-long ethnic cleansing of Palestinians and the mass murder campaigns such as recently seen in Gaza.

To gain some perspective on how much $100 billion is, consider the fact that, according to the World Bank Development indicators, at least 61 other countries have annual Gross Domestic Products (GDP) less than the amount of aid given to Israel. 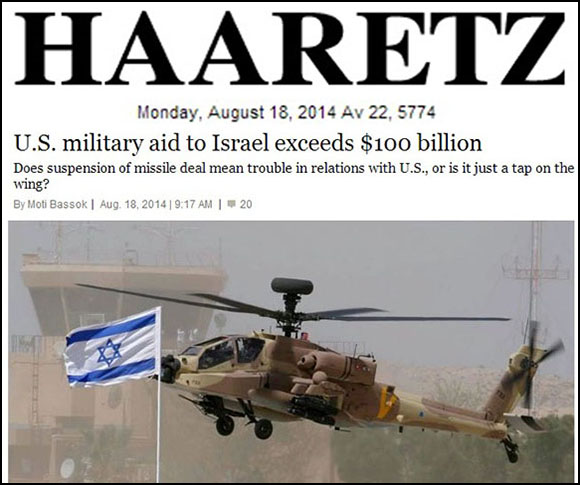 Among Jewish Supremacists, this “aid” is often the subject of much boasting. For example, a leading Jewish journalist for the Israeli newspaper Haaretz, Moti Bassok, could not contain his pride in this “achievement” of raking off so much money from American taxpayers:

“The United States of America is Israel’s big brother and really loves us. Israel does not have and apparently will not have another friend like it,” Bassok wrote, before continuing:

“According to a recent Congress report, Israel is the country that has received more cumulative American aid than any other country since the end of World War II.

“For the past decades the United States has been regularly transferring aid of about $3 billion annually. In recent years, the aid has been solely for defense purposes.

“Additionally, the U.S. has been giving Israel generous military aid for projects that are important both to it and to Israel.

“From 1985 on, in the framework of the plan to stabilize the economy, American aid was pegged at a grant of $3 billion annually.

“In that year Israel also received another grant of $1.5 billion. One of the negotiators between the countries in 1985 was Professor Stanley Fischer, who later became the governor of the Bank of Israel.

“The largest amount of American aid in grants and loans in a single year came to $15.7 billion in 1979, when Israel signed the peace treaty with Egypt.

“One of the most expensive arms deals in the history of Israel’s defense forces – the purchase of 20 F-35 fighter planes for $2.7 billion – will be financed entirely by aid money. The deal was signed towards the end of 2010 and the first planes are slated to be delivered to Israel next year.”

In other words, American taxpayers give billions of dollars to Israel—which is then used to “buy” weapons with which Israel murders Palestinians.

It is the goriest, dirtiest, most murderous “deal” in history, and the Jewish Lobby, its controlled Congressmen and Senators in Washington DC are accountable for not only the destruction of the American economy, but also the blood of hundreds of thousands of dead, wounded and maimed Palestinians on their hands.

Next Post The Shelling of Gaza: Zio-Lie Machine Exposed