In order to get married in Israel, applicants have to prove their Jewishness, and this is sometimes done with DNA testing, a leading rabbi in Israel specializing in the issue has told the Haaretz newspaper. 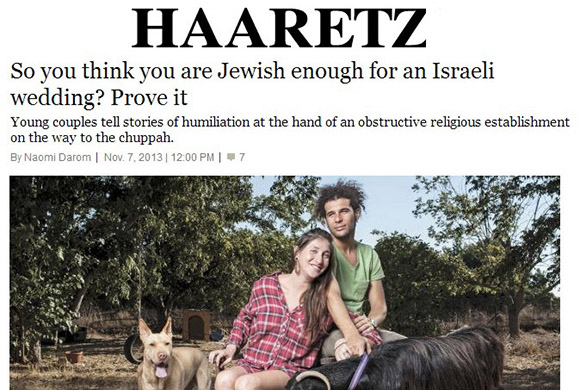 Rabbi Naftali Schreiber, who runs a private office for the clarification of Jewishness called “A People Alone” in Israel, revealed the extent of the “checks” undertaken by the Jewish state to make sure that no Gentiles are allowed to marry Jews in their country.

The article, titled “So you think you are Jewish enough for an Israeli wedding? Prove it” provides first provides some case samples of Jews who have had to provide documentation and references going back more than a century to prove their pure Jewish lineage after their Jewishness was questioned by the state.

It then moves on to an interview with Rabbi Schreiber, who is specifically asked “How does one prove Jewishness?”

His answer is as follows:

“We base ourselves on the documentation people provide—part of the profession is to authenticate documents.

“We have criminological machinery for authenticating documents, and we also carry out a personal inquiry in which we hear their story.

“We have a way to be in touch with archives abroad, or to refer the applicants themselves to the archives.

“Sometimes DNA testing is needed, and people agree to that, too.”

The article also describes the process through which marriage applicants have had to go:

Every Jewish couple that wants to be married in Israel has had, until recently,* to register at the local branch of the Rabbinate.

For each set of parents they need to bring the ketubah—the religious marriage contract—and the marriage certificate issued by the state.

For most couples, this is a short, formal act. However, if either the prospective bride or groom is unable to produce their parents’ ketubah, or if the local rabbi doubts that either or both are Jews, a process of “clarification of Jewishness” is set in motion.

According to data supplied by the Rabbinate, 4,500 people underwent this process in 2012, and 98 percent of them emerged with a declaration that they are Jewish.”

The article goes on to reveal that a report by the Israeli State Comptroller’s Office found that most of the rejections occurred with “immigrants from Ethiopia”—the so-called Falasha, or “black Jews.”

The article goes on to state that the Comptroller report  revealed that :

“[T]he Rabbinate places unnecessary obstacles in the way of converts to Judaism, refusing to register them for marriage even if they present certificates of conversion as demanded.”

* Last month, the Knesset passed a law that opens the areas of registration for marriage. Under the new legislation, a couple wishing to marry can register at any branch of the Rabbinate in the country, and not only the branch in its place of residence, as was the case until now.

Previous Post “America’s Strategic Ally Bill”: But Which Americans Voted for This?