In a back-handed tribute to Dr David Duke and this website, Seth Lipksy, the editor of the New York Sun newspaper, has referenced Dr. Duke’s most recent articles about the agreement reached with Iran in Geneva while launching an attack on his fellow but rival Zio-fanatics who run the New York Times. 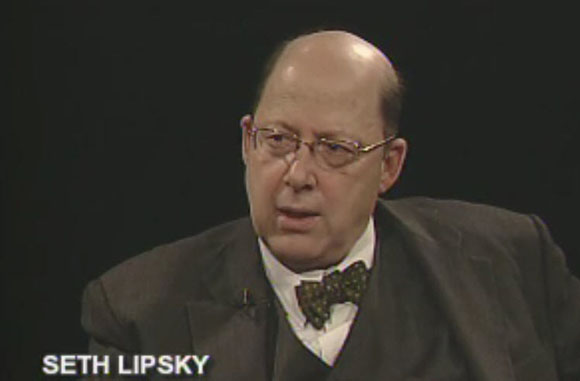 Lipsky, an influential figure in the world of Jewish Supremacist-dominated journalism and former editor of the Jewish Forward magazine, then went on to declare peace with Iran a “danger.”(!)

As discussed earlier on this website, one of the New York Times’ leading columnists, Thomas Friedman—a “liberal” Zio-Supremacist who supports the recent agreement in Geneva—wrote an article in that paper showing a rare display of honesty and naming the Jewish lobby as trying to derail the Geneva negotiations.

Friedman, angry that his fellow co-religionists wrote that the attempts by US lawmakers to undo the Geneva deal were not motivated by America’s interests, but by pressure from the Jewish lobby. As Friedman put it in his column which was obligingly reprinted by the New York Post newspaper:

“I’m certain this comes less from any careful consideration of the facts and more from a growing tendency by many American lawmakers to do whatever the Israel lobby asks them to do in order to garner Jewish votes and campaign donations.”

This confession from within the ranks of the combined Zio-Supremacists has clearly been too much for the “right wing” Zio-extremist Lipsky, who also founded the New York Post.

In an attack on the New York Times for daring to publish Friedman’s article, Lipsky wrote in one of his latest columns that Friedman’s comments were “the kind of talk David Duke has been publishing in reaction to the Geneva talks.”

Friedman then went on to castigate the “Gray Old Lady” as opponents derisively call the New York Times, for not being as extreme Zio-right wing as the New York Post or the Israeli government, and then, revealingly, specifically called for war with Iran as a better option than peace.

“It would be inaccurate to suggest that Friedman shares David Duke’s view of the Jews or of Israel,” Lipsky wrote (and we would agree with that).

“All the more bizarre is Friedman’s suggestion that Congress has been bought and paid for by the Israel lobby,” he continued, before going on to explain why even negating with Iran was dangerous, and that “peace is danger.”

“The fact is that there are a lot of highly educated people, in and out of Congress, who have studied their history. They know the lessons it teaches — that it’s not just the deal that is the danger. It is the talking itself. The very process of negotiation makes each side the partner to the other. The lesson is that the hunger for peace can itself be a danger.”

There are two interesting lessons to be learned from Lipsky’s outburst:

Lipsky’s comments have of course just proven Dr. Duke’s view correct once again, and for that, and for all future outbursts which show the true nature of Jewish Supremacism, we would like to thank him.

Previous Post Jewish Supremacists Being Exposed at Every Turn