A revealing insight into how “right wing” and “left wing” Zionists work has come with the open admission by a leading Jewish journalist in the New York Times that American lawmakers do whatever the Israel lobby asks them to do in order to garner Jewish votes and campaign donations. 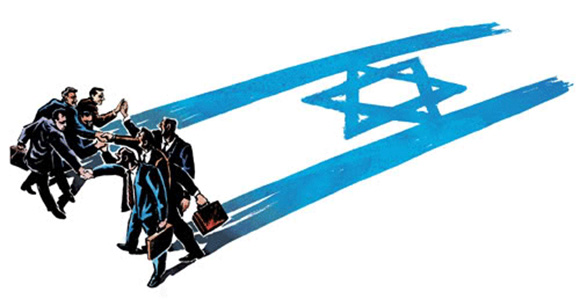 The astonishing admission—a reflection of the fact that their control is so secure that they can admit such things in public without real concern that they will be challenged—was made in an article written by New York Times foreign affairs columnist Thomas Friedman called “Let’s Make a Deal” and published on November 19, 2013.

Friedman, a “leftist Zionist,” supports the Obama administration’s approach to the negotiations on Iran, made the comments while criticizing attempts by the Jewish lobby to derail the current talks in Geneva on Iran’s nuclear program.

In his piece, he also openly admits that there is an “alliance” against “Protestants of America”—which of course, in politically correct terms, means European-Americans.

“The Middle East once again proves that if you eat right, exercise regularly and don’t smoke, you’ll live long enough to see everything, including a day when the Jews controlling Jerusalem and the Sunni Saudi Custodians of the Great Mosques of Mecca and Medina would form a tacit alliance against the Shiite Persians of Iran and the Protestants of America,” he wrote.

“But this tacit Israeli-Sunni Arab cooperation is not based on any sort of reconciliation, but on the tribal tradition that my enemy’s enemy is my friend — and the enemy is Iran, which has been steadily laying the groundwork to build a nuclear weapon.

“Diplomats and ministers from Israel and the Israel lobby have been working Congress, while officials from Arab Gulf states have been telling the Obama administration directly the same message . . . Never have I seen Israel and America’s core Arab allies working more in concert to stymie a major foreign policy initiative of a sitting U.S. president, and never have I seen more lawmakers — Democrats and Republicans — more willing to take Israel’s side against their own president’s.

“I’m certain this comes less from any careful consideration of the facts and more from a growing tendency by many American lawmakers to do whatever the Israel lobby asks them to do in order to garner Jewish votes and campaign donations.”

Friedman goes on to indicate why he supports the Obama approach to the Iran negotiations: “If Israel kills this U.S.-led deal, then the only option is military. How many Americans or NATO allies will go for bombing Iran after Netanyahu has blocked the best effort to explore a credible diplomatic alternative? Not many. That means only Israel will have a military option. If Israel uses it, it may set Iran back, but it will also set Iran free to rush to a bomb. Is Israel ready to bomb Iran every six months?”

Friedman’s column is also instructive as to how “left wing Zionists” view the Iran issue.

They are also, just like the “right wing Zionists”, implacably hostile to Iran, and make exactly the same wild lies about nuclear weapons (for example, Friedman claims in that that article that Iran has “lied its way to the  to the precipice of building a bomb”—something which is easily disproved as a n outright lie), and the only difference is that they seek to protect Israel by means of deception alone, rather than deception and outright war, which is the “right wing Zionist” option.

“Left wing” and “right wing” Zionism therefore have exactly the same objectives: the maintenance and interests of the ultra-racist state of Israel. This remains their prime concern and objective.