Amidst all the bad news about the wild excesses of Jewish Supremacists in Israel and in America, the good news is that increasing numbers of ordinary people are drawing together the courage to speak out openly about the power of the Jewish lobby and its highly damaging effect on world affairs.

The latest such example has come with a new article written by Professor James A. Russell, an Associate Professor in the Department of National Security Affairs at the Naval Postgraduate School in Monterey, CA, where he is teaching courses on Middle East security affairs, nuclear proliferation, terrorism, and national security strategy.

Professor Russell’s articles have appeared in a wide variety of media and scholarly outlets around the world, and previously held a variety of positions in the Office of the Assistant Secretary Defense for International Security Affairs, Near East South Asia, Department of Defense. He is thus very much an establishment figure—which makes his latest article even more remarkable. 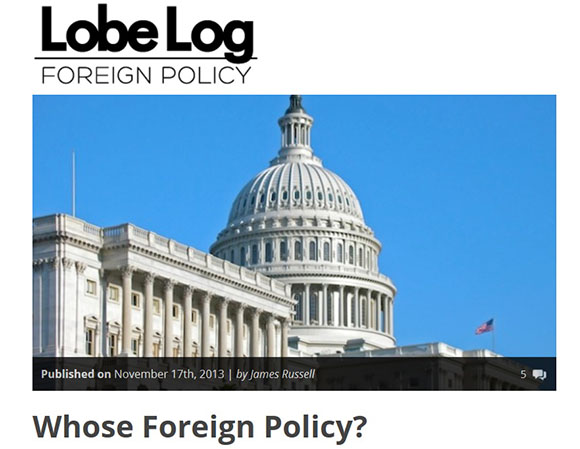 Writing in the LobeLog, the US foreign affairs blog of the international news wire service, IPS News (which is regularly cited in  various news outlets including the Economist, the New York Times, the Wall Street Journal, the Washington Post, the London Review of Books, TIME, the Daily Beast, the Atlantic, the American Conservative and the Guardian), Professor Russell has come right out with a frank discussion on the power of the Jewish lobby in determining American policy.

His article, titled “Whose Foreign Policy?” could not be clearer: “Whether we Americans like it or not, there is a profound struggle for control over our nation’s foreign policy in the Middle East. Push has finally come to shove, with the unseemly sight of Israeli government officials and AIPAC lobbyists fanning out on Capitol Hill to actively discredit the Obama’s administration’s attempt to craft a deal with Iran to bring the Islamic Republic’s nuclear program back under comprehensive international safeguards.

“After being supported for decades by tens of billions in American taxpayer dollars, free defense equipment, and unquestioning and limitless political support on countless occasions, Israel has shown its gratitude by biting the hand of its principal benefactor,” Professor Russell continued.

“All Americans both in and out of government would do well to consider an abiding truth in the standoff with Iran over its nuclear program: there is no military solution to this problem. Iran has the money, technical capability, and the infrastructure to build a nuclear weapon if chooses to do so. Bombing Iran to destroy a nuclear weapons program that the US intelligence community states does not exist only ensures that Iran will eventually build its own bomb. No amount of Israeli or US bombs can alter these essential realities.

“Israel’s leader Benjamin Netanyahu has staunchly and successfully opposed all attempts at peaceful accommodation with Israel’s enemies — aided and abetted by American money and political support. Netanyahu prefers the politics of confrontation that suit his interests and those of his political supporters on the right-wing of Israeli politics. This approach, however, does not serve American interests.

“There was a day when there was never a question about whether the United States was capable of going its own way and pursuing policies that primarily served its own interests. Today, there is no commonly accepted vision of America’s national interests as money has poured into our political process, serving the interests of the rich few — leaving most of the rest of the country behind.”

This is as far as Professor Russell dares to go—but everyone knows that the “money [which] has poured into our political process, serving the interests of the rich few” refers specifically to the Jewish Supremacists who make up the vast majority of campaign contributions in American politics.

Nonetheless, it is a welcoming sight to see increasing numbers of establishment figures finally publicly naming the Jewish lobby and pointing out that its activities are detrimental to American interests—and indeed the world’s.