The agreement reached in Geneva, Switzerland, this past weekend over Iran’s nuclear program is the best possible outcome for that nation—but has also revealed the “two-in-one similar interest” approach to Jewish Supremacy by both “left” and “right” wing Zio-fanatics.

There are certainly differing opinions among Jews at to what is better for the Jewish people, the threat of war or the threat of peace. But, in the overall scheme of things, its heads they win, tails you lose. It can be seen in the new deal with Iran. Sure Iran will be throttled, but a path to at least being treated somewhat fairly can be gleaned. But Israel, the real nuclear rogue state, gives up nothing, not its nukes, not its poison gas and biological weapons, not even a whisper of requiring Israel to have weapons inspections! Iran has to go through hell, even to be told what to do by Zionists who are the world’s biggest warmongers, while Israel is required not to behave in the least civilized sense, in regard to its treatment of the Palestinians. 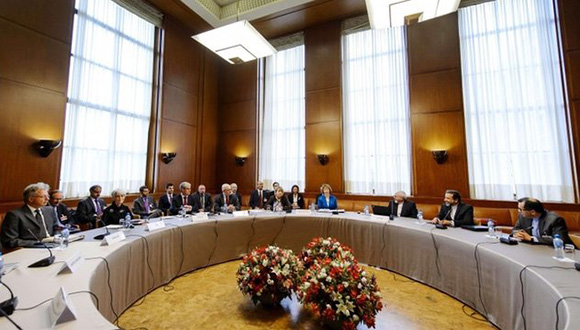 The agreement will see Iran halt uranium enrichment above 5 percent, neutralize its stockpile of 20-percent enriched uranium, refrain from installing next-generation centrifuges, halt all progress on the plutonium track and to agree to more intrusive monitoring of its nuclear program, providing “daily access” by IAEA inspectors to the enrichment sites at Natanz and Fordo.

This is of course no problem for Iran, because they were not aiming to build nuclear weapons anyway, despite the torrent of lies and misdirection put out by the Zionist Supremacists and their fellow co-religionists who control the U.S. mass media.

In other words, this is the best possible deal for Iran: on the one hand, it has no effect on their obviously peaceful nuclear energy program (which is what they said it was all along) and it completely takes away any “justification” the Zio-fanatics wanted to create for an attack on that nation.

Now, if the Zio-lunatics do actually attack Iran with a military strike, they will stand condemned by the world—although that has of course, never stopped these enemies of all humanity before, but at least it will all now have been written down in black and white for the world to see and to condemn them with.

From the “right wing” Zionist side, as represented by Likud and Benjamin Netanyahu, backed up by the ever-increasing number of ultra-religious Jews in Israel (who are rapidly outbreeding the more secular, “liberal” Jews, even in New York City),  this deal is extremely frustrating, precisely because it undermines their efforts to spark off yet another war.

In his official reaction, Netanyahu called the Geneva deal a “historic mistake”, and said that Israel does not see itself as “bound by this agreement” — which of course means that the Jewish Supremacist state might attack Iran all by itself if it sees fit.

The Zio-fanatics know that they can still count on the unqualified support of their controlling network in America for backing even if they do this.

Proof of this was provided by the first large “American” Jewish group, the Anti-Defamation League (ADL), in its response to the deal.

Although the ADL is supposed to be a “civil rights” organization dedicated to protecting Jews inside America, it seems to have “somehow” morphed into yet another Israel lobby, and was one of the Jewish Supremacist groups “consulted” by the White House on America’s foreign policy prior to the negotiations in Switzerland.

The ADL expressed “deep concern” Sunday about “flaws” in the agreement with Iran. ADL National Chairman Barry Curtiss-Lusher and National Director Abraham Foxman released a rare joint statement in which they said that the interim agreement provided Iran with concessions that Iran “has not earned” and warned that in the past, Iran has “used respites from international pressure to surreptitiously make progress in its nuclear program.”

The “right wing” Zionist viewpoint was however best summed up in comments made by the former head of Israeli Military Intelligence and current director of the Institute for National Security Studies think tank, Amos Yadlin, who told the Israeli Army Radio that the Israel’s main objective—seeing the destruction of Iran—remains in place.

“The fall of this regime before it gets the bomb should be our objective,” Yadlin said.

The “left wing” Zionists have taken a slightly more practical approach. Newly-elected leader of Israel’s Labor Party (which is the official opposition to Likud), Isaac Herzog pointed out that the deal in Geneva was an “interim agreement; it isn’t Judgment Day, which hasn’t arrived yet.”

“The agreement signed last night,” Michaeli wrote late Sunday, “is not perfect, but it distances Iran from a [nuclear] bomb and gives the international community important tools for oversight that will ensure Iran remains far from a bomb; and it leaves in place meaningful sanctions.”

This position is also the one officially held by the US government—in other words, the deal is, from the Jewish Supremacist side, also in Israel’s interests, even though it does not fulfill the demands for war from the “right wing” Zionists.

At the end of the day, therefore, the aim of “both sides” is exactly the same:  the preservation of the Jewish Supremacist, racist and anti-Gentile state of Israel. There is no difference in objectives between the so-called “right wing” and the “left wing” Zionists, and the US government remains the helpless puppet of both.

Of importance to bear in mind when considering all of this is the fact that all along the reality is that Israel is the only nation with nuclear weapons–and not the “American” government, or the “left wing” or “right wing” Zionists have anything at all to say about it!

Israel is the only nuclear rogue state in the Middle East–and the fact that there is no discussion about it or demands for the Zionist state to dismantle its atom bombs, is final proof of who really controls the political discourse in the West’s mass media and governments.

Next Post Jewish Supremacists Being Exposed at Every Turn