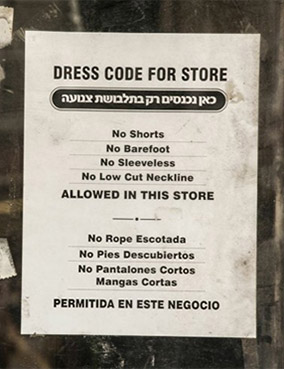 Not content with determining the outcome of the next New York City mayor’s election, orthodox Jews in New York City have now issued a new set of demands from America’s largest city—including sexual segregation, the implementation of ancient Jewish cooking laws, and the opening of public facilities on Sundays to accommodate their Saturday Sabbaths.

According to an article in the New York Times titled “Out of Enclaves, a Pressure to Accommodate Traditions,” orthodox Jews have made the following demands on the city council:

– Hasidic women want the city to post a female lifeguard during a women-only swim session at a municipal pool in Williamsburg, Brooklyn;

– Hasidic matzo bakeries, citing ancient Jewish law, have insisted on using water from groundwater wells rather than from reservoirs in preparing the dough used for matzos and have found themselves tangling with health officials worried about the water’s purity;

– A public bus service that plies a route between the Hasidic neighborhoods of Williamsburg and Borough Park, Brooklyn, men sit up front and women in the back, hewing to the practice of avoiding casual mingling of the sexes;

–  The city’s Commission on Human Rights issued complaints last year against a half-dozen Hasidic merchants on Williamsburg’s Lee Avenue for posting signs stating, “No shorts, no barefoot, no sleeveless, no low-cut neckline allowed in this store.” The signs, the city said, discriminated against women and non-Orthodox men in places patronized by the public.

– Hasidim have also been pressing public libraries in their neighborhoods to open on Sunday, just as the post office and banks now do, since they cannot patronize them on the Sabbath. But Brooklyn library officials refuse, pointing out that union contracts require expensive Sunday overtime.

According to the New York Times, these episodes, “taken together they underscore a religious ascendancy confronting the city’s secular authorities in ways not seen in decades.

“A politically astute new generation of ultra-Orthodox leaders has become savvy at navigating the halls of government, while the grand rabbis of Hasidic sects wield electoral power like few religious leaders can, turning followers into cohesive voting blocs.

“‘No one can deliver votes like a rebbe can,’ said Samuel Heilman, a professor of sociology at the City University of New York, who has written extensively about ultra-Orthodox Jews.”

The NYT went on to explain that this “power was evident most recently in last September’s primary for Democratic district leader in the area covering Williamsburg and Greenpoint.

“Two factions of Satmar Hasidim turned out at the polls in astonishing numbers for such a relatively obscure post, yielding a turnout of 11,000 votes, among the city’s largest.

“Many members of both factions admitted they did not know whom they were voting for but had been instructed to do so by their rabbis or yeshiva officials. The dominant Satmar faction made the difference in vaulting a candidate to the leadership.”

The NYT said that as “a result, the image New Yorkers and the city’s power brokers have of Hasidim has changed. ‘They are no longer an obscure group — they’re not just quaint,’ Professor Heilman said.

New York City, long one of the Jewish Supremacists’ strongholds in America, is becoming more Jewish, more radical, and more fanatic than ever before.

The Jewish population is widely estimated to be at least 1.1 million—and most likely more. Some 40 percent of Jews in the city identify themselves as Orthodox, an increase from 33 percent in 2002; and 74 percent of all Jewish children in the city are Orthodox.

*A shtetl (Yiddish for the diminutive form of shtot, “town”), was the name given by Jews to a town with a large Jewish population in Central and Eastern Europe during the early twentieth century.

Next Post The Next Big Lie and the Next War: This Time Syria!