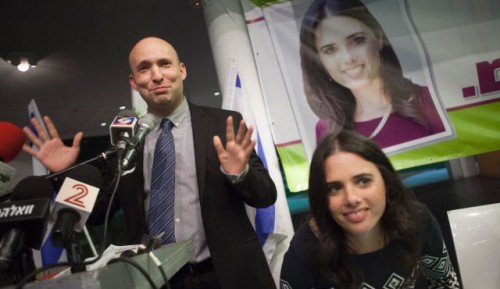 During Israel’s summer 2014 attack on Gaza, MK Shaked essentially called for the genocide of Palestinians. In a Facebook post on July 1—a day before Israeli extremists kidnapped Palestinian teenager Muhammad Abu Khdeir and burned him alive—the lawmaker asserted that “the entire Palestinian people is the enemy” and called for its destruction, “including its elderly and its women, its cities and its villages, its property and its infrastructure.”

Her post consisted of an excerpt from an article by Uri Elitzur, the late right-wing journalist and leader of the Israeli settler movement, which seeks to colonize Palestinian land in contravention of international law. Elitzur also served as a speechwriter and advisor to Netanyahu.

Shaked later deleted the status, which garnered 1,000s of likes and shares, yet not before it was archived. The following is a translation of her post (courtesy of Dena Shunra):

I don’t know why it’s so hard for us to define reality with the simple words that language puts at our disposal. Why do we have to make up a new name for the war every other week, just to avoid calling it by its name. What’s so horrifying about understanding that the entire Palestinian people is the enemy? Every war is between two peoples, and in every war the people who started the war, that whole people, is the enemy. A declaration of war is not a war crime. Responding with war certainly is not. Nor is the use of the word “war”, nor a clear definition who the enemy is. Au contraire: the morality of war (yes, there is such a thing) is founded on the assumption that there are wars in this world, and that war is not the normal state of things, and that in wars the enemy is usually an entire people, including its elderly and its women, its cities and its villages, its property and its infrastructure.

And the morality of war knows that it is not possible to refrain from hurting enemy civilians. It does not condemn the British air force, which bombed and totally destroyed the German city of Dresden, or the US planes that destroyed the cities of Poland and wrecked half of Budapest, places whose wretched residents had never done a thing to America, but which had to be destroyed in order to win the war against evil. The morals of war do not require that Russia be brought to trial, though it bombs and destroys towns and neighborhoods in Chechnya. It does not denounce the UN Peacekeeping Forces for killing hundreds of civilians in Angola, nor the NATO forces who bombed Milosevic’s Belgrade, a city with a million civilians, elderly, babies, women, and children. The morals of war accept as correct in principle, not only politically, what America has done in Afghanistan, including the massive bombing of populated places, including the creation of a refugee stream of hundreds of thousands of people who escaped the horrors of war, for thousands of whom there is no home to return to.

And in our war this is sevenfold more correct, because the enemy soldiers hide out among the population, and it is only through its support that they can fight. Behind every terrorist stand dozens of men and women, without whom he could not engage in terrorism. Actors in the war are those who incite in mosques, who write the murderous curricula for schools, who give shelter, who provide vehicles, and all those who honor and give them their moral support. They are all enemy combatants, and their blood shall be on all their heads. Now this also includes the mothers of the martyrs, who send them to hell with flowers and kisses. They should follow their sons, nothing would be more just. They should go, as should the physical homes in which they raised the snakes. Otherwise, more little snakes will be raised there.

A week before, Shaked wrote another status insisting

These remarks led Turkish President Recep Tayyip Erdoğan to compare MK Shaked to Hitler. “If these words had been said by a Palestinian, the whole world would have denounced it,” he remarked.

Journalist Mira Bar-Hillel called the statements “the reason why I am on the brink of burning my Israeli passport.”

Shaked has also adamantly opposed signing any peace deals with Palestinians based on the pre-1967 borders, claiming that such a deal would constitute “national suicide.” Netanyahu was re-elected on the promise that there would never be a Palestinian state.

The lawmaker has furthermore called for annexing parts of the West Bank, which have been under illegal Israeli military occupation since 1967.

Naftali Bennett, the leader of the HaBayit HaYehudi party of which Shaked is a prominent member, has himself drawn criticism for his similarly extreme, far-right views. In 2013, Bennett, as Minister of the Economy, declared “I have killed lots of Arabs in my life—and there is no problem with that.”

The Most Right-Wing Government in Israeli History

Bennett plays an important role in Netanyahu’s coalition government. He pressured the prime minister to appoint Shaked as justice minister. Netanyahu needed a majority of seats in the 120-member Knesset in order to form a government. Bennett refused to have HaBayit HaYehudi—which had the extra eight seats needed, beyond the 53 Bibi had already established, for a majority—join unless Shaked was given the justice ministry position. Netanyahu conceded, on the conditions that she does not appoint rabbinical judges and does not head the committee overseeing the nomination of new judges.

Extreme-right leader Avigdor Lieberman, the former Israeli foreign minister who called for the beheading of disloyal Palestinians, unexpectedly announced that his Yisrael Beiteinu party, which has six MKs, would refuse to join the new government. Liebermanargued the coalition is not right-wing enough, as he believed it will not pass the so-called “nationality law,” officially defining citizenship based on Jewish ethno-religious heritage—thus turning non-Jewish Israelis into official, de jure second-class citizens—or that it will not go all out to destroy the elected Hamas government of Gaza. Netanyahu thus gave into Bennett’s demands in order to ensure the majority.

Netanyahu’s fourth government is even further to the right of his previous ones. Many Israelis are concerned, and have characterized the new government as “Bibi’s all-time worst coalition.”

In response to Netanyahu’s appointment of Shaked, head of the Peace Now organization Yariv Oppenheimer commented, “Shaked as Justice Minister is like placing an idol in the Temple. No less.” MK Nachman Shai, of the Zionist Union, remarked “the demand to give Ayelet Shaked the Justice portfolio is like giving the Fire and Rescue Services to a pyromaniac.”

Arutz Sheva, an Israeli news outlet associated with the settler movement, notes “Shaked is expected to tackle leftists inside the judicial system head on.” The publication also characterizes her appointment as an “historic” and “major political coup,” writing

Shaked’s appointment is considered a major political coup and could potentially pave the way for an historic change in Israeli politics. The judicial system in Israel is considered to be the strongest governmental bastion of the leftist founding elites, and its “activism” has hampered attempts by the Right to effectively rule Israel for decades.

The extreme views of Shaked and Bennett are not limited to their party. Other powerful figures in Netanyahu’s government harbor similar ideas. During Israel’s summer 2014 attack, codenamed “Operation Protective Edge,” deputy speaker of the Knesset Moshe Feiglin, a senior figure in Bibi’s Likud party, called for Israel to “concentrate” and “exterminate” Palestinians in Gaza.

An independent investigation into Operation Protective Edge found Israel deliberately targeted civilians and medical workers and used unconventional weapons. After eight months of interviewing over 60 Israeli soldiers and officers who participated in the assault, Israeli veterans organization Breaking the Silence also discovered that “soldiers were briefed by their commanders to fire at every person they identified in a combat zone.” Soldiers say they were ordered to “shoot to kill” “any person you see,” including civilians.

Prime Minister Netanyahu and many of his political peers have continuously referred to the Israel Defense Forces as “the most moral army in the world.” Israeli soldiers recallshooting Palestinian civilians in Gaza because they were “bored.”

Next Post Dr. Duke on the Real Reason for Rising Racial Hatred and Conflict! Listen to Today’s and Yesterday’s show!