Anyone who doubted that the American government, media and “culture” has not been completely colonized and taken over by Jewish Supremacists and their sick ideological worldview, need look no further than the case of Masha Gessen.

This Russian Jewess is that nation’s most famous, self-declared lesbian who also demands complete destruction of traditional marriage.

While homosexual and lesbian Jews are not uncommon (Jewish Supremacists have, as this website has pointed out before, been at the forefront of promoting homosexuality—except in Israel, where homosexual marriage is outlawed), what makes Gessen special is that she has been feted by the American State Department as a “honored” person, is promoted endlessly by the Zio-media, and was even employed by the American government in its anti-Russian “Radio Liberty” radio station in Prague.

Gessen is far more than just another lesbian Jewess. She is certainly one of the leading exponents of the destruction of traditional family values and is an openly-declared enemy of the very institution of marriage.

For example, in June 2012, she appeared as a guest on Australia’s ABC radio service “Life Matters” program, in which she declared:

Not surprisingly, Gessen’s opinions are identical to that of the original Jewish Supremacist Communist, Karl Marx, who wrote in Chapter 2 of The Communist Manifesto:

“Abolition [Aufhebung] of the family! The bourgeois family will vanish as a matter of course when its complement vanishes, and both will vanish with the vanishing of capital.”

In the same ABC radio show, Gessen went on to admit the double agenda of same-sex marriage activists:

“[F]ighting for gay marriage generally involves lying about what we are going to do with marriage when we get there — because we lie that the institution of marriage is not going to change, and that is a lie.

“The institution of marriage is going to change, and it should change. And again, I don’t think it should exist.

“I have three kids who have five parents, more or less, and I don’t see why they shouldn’t have five parents legally… I met my new partner, and she had just had a baby, and that baby’s biological father is my brother . . .

“Many of the Euro-Atlantic countries are actually rejecting their roots, including the Christian values that constitute the basis of Western civilization.

“They are denying moral principles and all traditional identities: national, cultural, religious and even sexual. They are implementing policies that equate large families with same-sex partnerships, belief in God with the belief in Satan.”—(“Life Matters,” ABC Radio, June 2012).

So who is this person who is opposed to the existence of the institution of marriage?

Gessen has become a favorite target for Russians who seek to preserve traditional family values primarily because of her extensive subversive activities in Russia.

In an extensive October 2008 profile of Vladimir Putin for Vanity Fair, Gessen reported that the young Putin had been “an aspiring thug” and that “the backward evolution of Russia began” within days after his inauguration in 2000.

She went on to contribute several dozen commentaries on Russia to The New York Times blog “Latitude” between November 2011 and December 2013.

Gessen writes primarily in English but also in her native Russian, and in addition to writing books on Putin and Russian feminist punk rock protest group Pussy Riot, she has been a prolific contributor to such publications as The New York Times, The Washington Post, the Los Angeles Times, The New Republic, New Statesman, Granta, Slate, Vanity Fair, and U.S. News & World Report.

In September 2012, Gessen was appointed as director of the Russian Service for Radio Liberty, a U.S. government funded broadcaster based in Prague. So this advocate of destruction of the traditional family is the “American voice” to the Russian people!

In December 2013 she moved to New York because she felt more at home in that Jewish metropolis than in Russia, where her bizarre lifestyle and increasingly outrageous attacks on family values began to attract more and more attention from the authorities.

In the US, she continued to be feted and supported by the Zio-media and establishment.

Her “books” are celebrated and endorsed by the establishment: The New York Review of Books has described her anti-Putin book  The Man Without a Face: the Unlikely Rise of Vladimir Putin as written in “beautifully clear and eloquent English,” and stated that it was “at heart a description of th[e] secret police milieu” from which Putin originated and was “also very good at evoking…the culture and atmosphere within which [Putin] was raised, and the values he came to espouse.”

The Guardian called her book “luminous”; the Telegraph called it “courageous”. That book has now been translated into 20 languages and spread all over the world.

Her book on the anarchist “band” Pussy Riot, called Words Will Break Cement: The Passion of Pussy Riot was described by the Telegraph as convincing of that band’s “courage,” while Booklist described the book as “prickly, frank, precise, and sharply witty.” The New York Times called it “urgent” and “damning.” The Washington Post called the book an “excellent” portrait of Pussy Riot and said that “Gessen gives a particularly brilliant account of their trials.” The Los Angeles Times said that Gessen was “Not just a keen observer of these events” but “also an impassioned partisan.”

In addition, the New York Times reported in May 2013 that Gessen had signed a contract to write a book for Riverhead, an imprint of the Penguin Group, about the Tsarnaev brothers, the perpetrators of the Boston Marathon bombings.

Gessen was the Guest of Honor at the 2012 ceremony awarding the Swedish Grand Prize for Journalism, and won the 2013 Media for Liberty award for her Vanity Fair article “The Wrath of Putin”.

Gessen has given talks around the Western world and has appeared on Skavlan (Sweden), PBS News Hour, and MSNBC.

She spoke at the Council on Foreign Relations in 2012 and in the same year, spoke at the Personal Democracy Forum in New York.

In June 2014, she was guest of honor at a US State Department “annual Gays and Lesbians in Foreign Affairs Agencies Pride celebration.” There, the “American” Secretary of State, fellow Jew John-Kerry Cohen said of Gessen:

“The government in Moscow may look at Masha as a troublemaker to contend with, but here in the United States, we know that she is a wonderful person — a mother, a journalist, an extraordinary human rights defender — and we are honored by her presence here.” 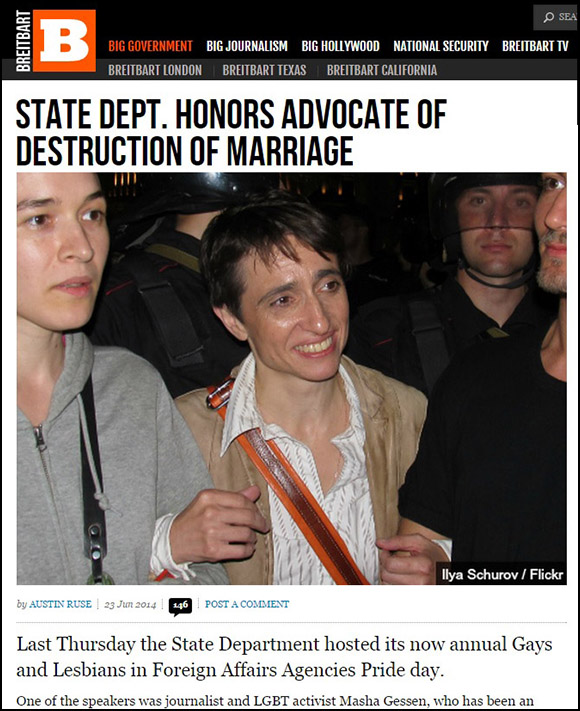 In other words, Gessen is no “small time” player: she is a feted and officially establishment-supported activist who has been formally honored by the “American” government and all the major Zio-media organs.

There can be no doubt that Gessen’s opinions are the very opposite of what the average American thinks.

And for this very reason, she is promoted and supported by the Zio-controlled establishment and government.

Can there be any doubt as to the agenda of the Jewish Supremacist controllers of America?

Can there be any doubt as to their aim: the destruction of everything dear to the very essence of Western Civlization?

* Gessen’s activities are just part of an ongoing and wide-ranging Jewish Supremacist attack on all Western values. See for example this report on how Jewish Supremacists “challenge America’s family-friendly culture” by being deliberately obscene, and of how Jews have led the pornography industry as a deliberate means of attacking society.

The thoroughly Jewish Gessen, who is praised by the Zio-Media Establishment in America, and in the highest echelons of the U.S. Government, is not some Jewish anomaly.

A previous article in DavidDuke.com quotes Haaretz newspaper in Israel praising a Jewish writer who is an authority on pornography and who happily admits the overwhelming Jewish domination of pornography in the Western World.

His is a quotation from our article and a photocopy of the Haaretz headline that says it all. 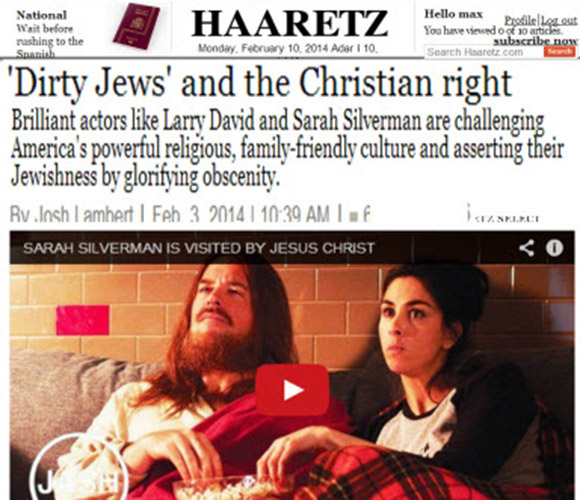 So, as you can see, The U.S. Government policy of promoting this radical enemy of the traditional family, completely mirrors the Jewish pornographic attack on “American Christian family values” which the Israeli Jewish publication Haaretz sees as in the interest of the Jewish people in the Western World.

This disgusting, Jewish attack on family values is typified by super Jew, Masha Gessen. According to the message of the Haaretz article, Gessen is indeed “asserting her Jewishness” by attacking the family values of both Russia and America.  — Dr. David Duke