Dr. Duke focused on the ways Jewish supremacists manipulate us through their control of the media to adopt their Jewish priorities. He brought up a recent article from the Israeli press that quotes an Israeli diplomat in Germany as stating that it is in Israel’s interest to maintain German guilt about the Holocaust and that normal relations between the countries was not being sought. As a perverse result, Germany gives Israel submarines capable of striking Germany with nuclear weapons! 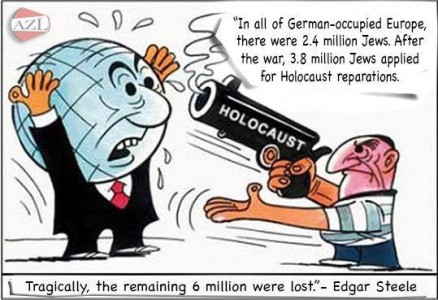 Dr. Slattery joins and notes the evolution of the Holocaust narrative over the decades, comparing the scant mention of it in the 1950 edition of the Encyclopedia Britannica with the Holocaust saturation in today’s movies and textbooks. Dr. Duke comments that goyim are forever apologizing, but asked when Jews would ever have to apologize for the tens of millions killed by Jewish Bolsheviks or for the destruction of America through immigration, financial plunder, and moral degradation. Dr. Slattery replied that being Jewish means never having to say your sorry.

This is a show that will get you worked up. Work up someone you know.

Previous Post Israeli diplomat: We want Germany to have guilty feelings over the Holocaust so it can help Israel