Commentary by Dr. David Duke — One way we know that the Gentile world is waking up to Zionist racism and extremism is simply that the Jewish extremists are going ballistic about the incredible support given to my video exposing global Zionist ultra-racism and its pernicious influence in media, governments and finance. 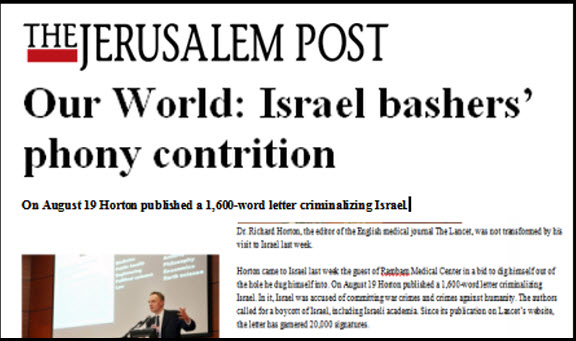 As I reported recently, the editor of Lancet cravenly prostrated himself before the Zionist powers and begged for forgiveness. Reversing his earlier stand publishing the letter by doctors who exposed the crimes of Israel , Dr. Horton traveled to Israel and apologized for the letter.

In addition, he condemned the doctors who wrote it and he condemned me for my video CNN, Goldman Sachs and the Zio Matrix.

Instead he announced he was so  proud and “honored to be in Israel.”

All of Dr. Horton’s moral cowardice did him no good however in the eyes of the Jewish extremists.

In The Jerusalem Post in an article titled, Our World: Israel Basher’s Phoney Contrition, they stepped up the attack on Lancet:

Horton came to Israel last week the guest of Rambam Medical Center in a bid to dig himself out of the hole he dug himself into. On August 19 Horton published a 1,600-word letter criminalizing Israel. In it, Israel was accused of committing war crimes and crimes against humanity. The authors called for a boycott of Israel, including Israeli academia. Since its publication on Lancet’s website, the letter has garnered 20,000 signatures.

The are incensed, but we should be very happy that 20,000 members of the medical intelligentsia signed on in support of the letter. The author of The Jerusalem Post article, Caroline Glick, goes on:

As Britain’s Telegraph reported, in disseminating the video, Ang exhorted her audience to understand that the Jewish threat outlined in the video is a threat to humanity. In her words, it “is not about Palestine – it is about all of us!”

Of course, the reality is that Dr. Ang is completely right. It is about all of us, not just the Palestinians. Zionist is an existential threat to the European people, the Arabic people, and truly all the people for the reach of Zio financial power is global.

The reach Zio media power is global. The reach of Zio governmental influence is global. It has led us to the non-stop, insane wars since the turn of the 21st Century, and leads us to an increasing more violent, addicted, degraded humanity through its degenerate values thrust upon people in the mass media.

Glick goes on to condemn Sweden for recognizing Palestine.

That itself is so enlightening.

Think about it. The Zionist have got the world to recognize the State of Israel which was created by massive crimes of ethnic cleansing and terror, but for some reason if the world recognizes the beleaguered and brutalized Palestinian enclaves that are little more than concentration camps, that would be the height of “anti-Semitism.”

Thank God for Dr. Ang and the 29,000 medical elite that signed the letter in the Lancet.

The latest attack on Dr. Horton, even after he fell down and licked the hands of those who attacked him, shows that the Zionists are truly psychologically ill. They are the worlds most powerful psychopaths.

I am thankful that I can continue to make real contributions to unmasking and deposing them.

I am also thankful for your support in my efforts!