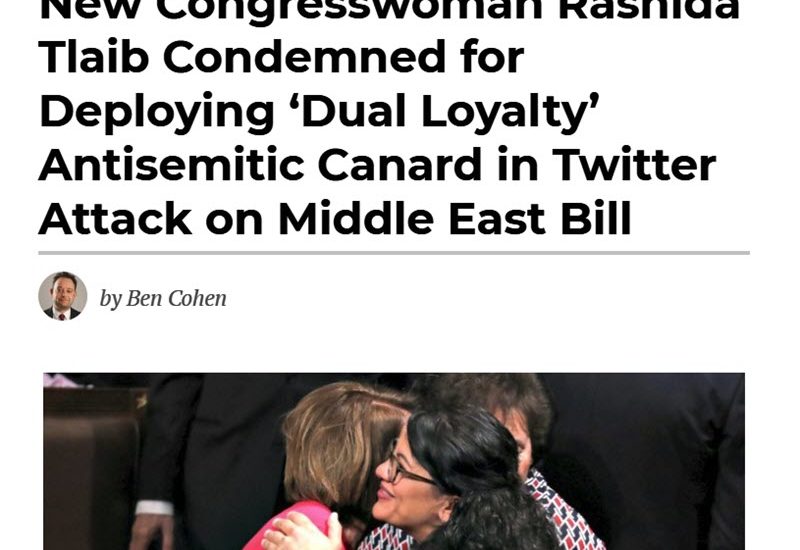 It is always incumbent upon us to point out the true meaning of the Jewish word “Chutzpah.” Jewish comedians explain this strange word “chutzpah” by telling the story of “a Jewish boy who kills his parents and then asks for mercy from the court because he is an orphan.

That humorous Jewish tale says it all. No word has more relevance to the gross hypocrisy of the Jewish establishment and Jewish media than chutzpah. Take the chutzpah of The Algemeiner Journal, a major international Jewish journal that unabashedly shows its loyalty for Jewish interests worldwide and for Israel, a ethnostate based on Jewish ethnic supremacism.

Ben (((Cohen))) another Cohencidence reveals utter chutzpah in the headline: “New Congressman Rashida Tlaib Condemned for Deploying ‘Dual Loyalty’ Antisemitic Canard in Twitter Attack on Middle East Bill.” So an unabashedly Jewish publicly that often brags of Jewish intellectual superiority of Jews over all other people of the world, and says that Jews must be totally loyal to Israel, has an article exposing the “antisemitic canard” of dual loyalty. 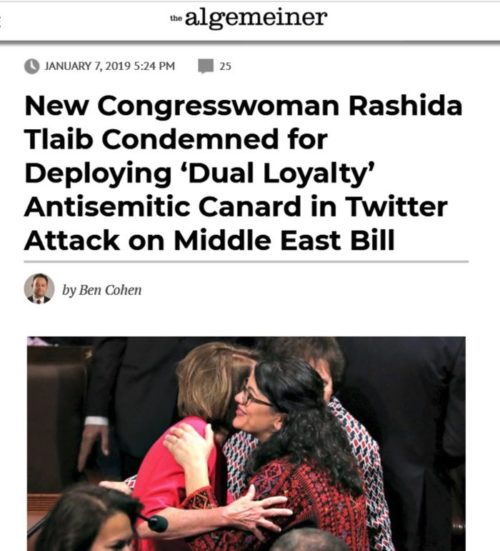 “Newly-elected Michigan Congresswoman Rashida Tlaib came under fire on Monday for tweeting that fellow legislators who supported a bill to strengthen US security measures in the Middle East ‘forgot what country they represent” — invoking, in the eyes of many observers, the classic antisemitic canard that Jews care only for their own community and the State of Israel, and not the countries in which they reside as loyal citizens.”

Tlaib was protesting that the very 1st Bill proposed by the 2019 Zionist controlled U.S. Senate and House is a bill promoting the prohibition of free speech by anyone who supports economic and commercial boycotts of Israel or who dares to refuse to have their purchases support Israeli crimes. In typical Jewish establishment hypocrisy, Cohen argued that advocating boycotts of a foreign nation for its criminal policies is completely against American principles of “equal rights.” Of course the real violation of rights is a bill that forbids American people to speak and or act for a boycotting of a foreign nation that in addition to horrific terrorism and murder of thousands of Palestinians, has actually made terrorist attacks on America such as the Lavon Affair and the Attack on the U.S.S. Liberty.

Of course, the same Jewish Media and Political organizational establishment saw no problem with the boycott of White South Africa while promoting the Marxist takeover of South Africa by ANC Communist terrorists including Communist Party Central Committee member and terrorist Nelson Mandela. Every Jewish organization promoted laws demanding compliance to boycotting the Afrikaner state, but now every Jewish major organizations opposes even the American right not to support the Zionist, Racist State of Israel. Cohen quotes Greenblatt, head of the Jewish supremacist Anti-Defamation League, saying:

“It is a long-standing antisemitic trope connected to the idea that Jews are more loyal to Israel than their own country, or that US legislators — for some conspiratorial reason — are more concerned about issues related to Israel than US national interest.”

Again in utter chutzpah, the article points out that the largest Jewish Organization in America and the Western World, the American Jewish Committee (AJC) responded by ads showing Tlaib “hugging a supporter draped in the Palestinian flag — a cause that Tlaib, a supporter of the boycott, divestment and sanctions campaign (BDS) has promised to champion in Congress.” Of course, It is perfectly okay for the most powerful and richest lobby in the U.S. Congress, AIPAC, the American Israel Public Affairs Committee, has huge meetings packed with bribed U.S. officials swearing allegiance to 50 foot huge flags of the foreign nation of Israel.

Not a single important outlet of American mainstream media or a single political leader in the U.S. sees no problem that the most powerful lobby in the U.S. Congress is a lobby for not a domestic issue, but a foreign nation. There is no shock that Israel is paid back in tens of billions of American tax dollars for its millions of dollars in campaign bribes of American elected officials. The hypocrisy should burn Greenblatt’s soul and all media that says Jewish disloyalty is a “canard.” Even the phrase Jewish “dual loyalty” itself is a lie when Jewish leaders themselves openly proclaim the need for Jews to have a single loyalty for Israel over America.

Jewish organizations in the rest of the world do the same thing in most of the nations of the world. The truth about the real loyalty of Jews is expressed bluntly by the former head of National Affairs for the AJC, Dr. Stephen Steinlight. He wrote this in a carefully worded article he wrote in a Jewish publication for a presumably Jewish audience.

“I’ll confess it, at least: like thousands of other typical Jewish kids of my generation, I was reared as a Jewish nationalist, even a quasi-separatist. Every summer for two months for 10 formative years during my childhood and adolescence I attended Jewish summer camp. There, each morning, I saluted a foreign flag, dressed in a uniform reflecting its colors, sang a foreign national anthem, learned a foreign language, learned foreign folk songs and dances, and was taught that Israel was the true homeland. Emigration to Israel was considered the highest virtue, and, like many other Jewish teens of my generation, I spent two summers working in Israel on a collective farm while I contemplated that possibility. More tacitly and subconsciously, I was taught the superiority of my people to the gentiles who had oppressed us. We were taught to view non-Jews as untrustworthy outsiders, people from whom sudden gusts of hatred might be anticipated, people less sensitive, intelligent, and moral than ourselves. We were also taught that the lesson of our dark history is that we could rely on no one.” 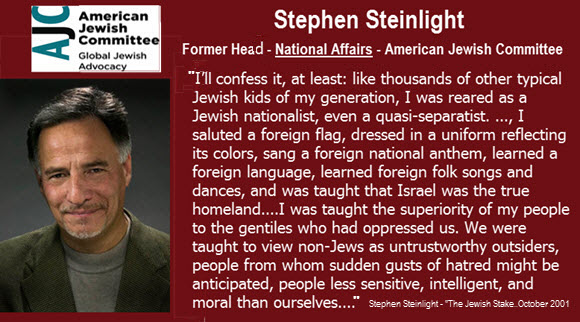 Similar quotes can be found by leaders of numerous multi-billion dollar Jewish advocacy organizations in America and across the world.A good example is the World Jewish Congress, who has national affiliates across most of the nations of the world. Here are some excerpts from its mission statement that makes it clear that the organization is solely about advancing the “interests of the Jewish people, “Jewish identity,” and the “state of Israel.” It goes on to say that its members will endeavor to influence governments, civil organizations, educational institutions, religious interfaith groups, all to support the interests of the economic and other interests of the Jewish people and Israel worldwide.

Here is a graphic from the World Jewish Congress meeting in Budapest in 2013 titled “Implementing the Globalist Jewish Agenda.” The mission Statement of the World Jewish Agenda is made crystal clear on the organizational website: to advance every conceivable economic, political and cultural interest of Jews and Israel in every nation and every institution possible, from government and political policies to that of corporations and other civic or cultural or educational institutions. 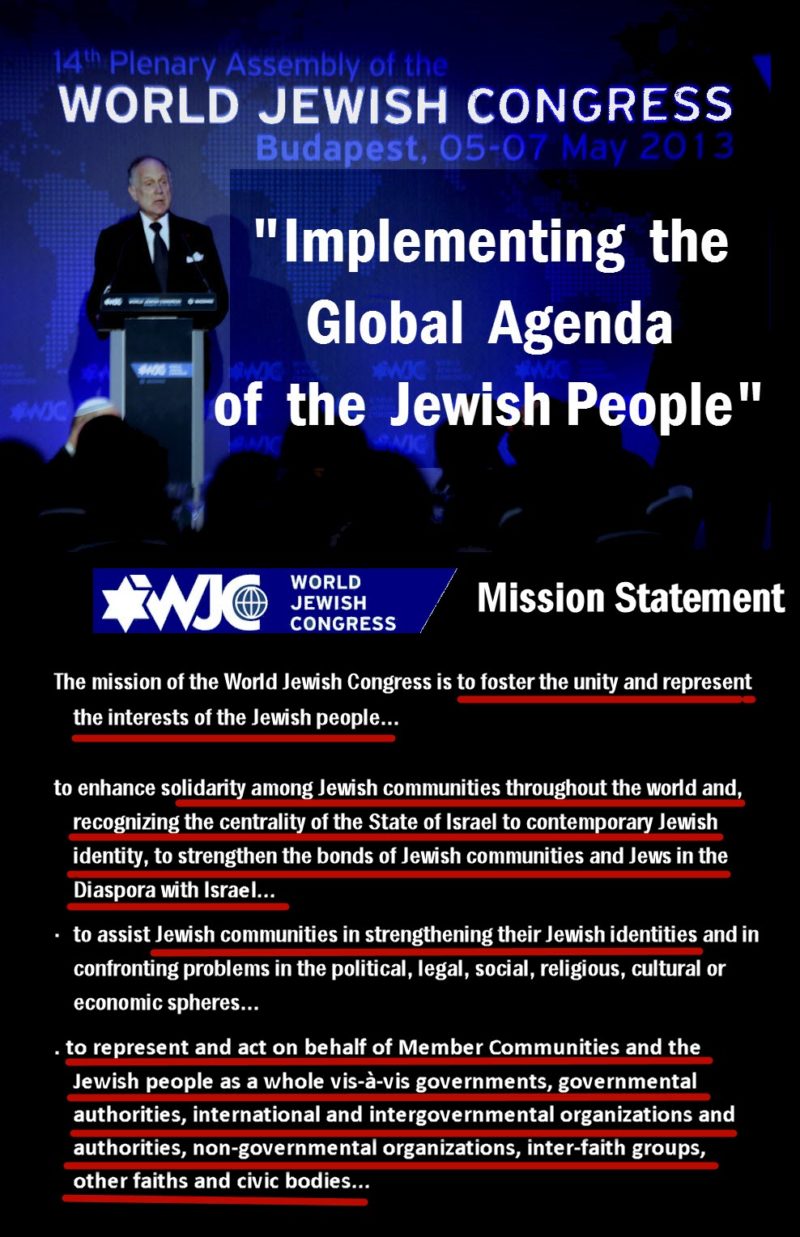 So, is Jewish dual loyalty just a Canard? In fact, when you study the statements of Jewish leaders of billion dollar Jewish organizations you realize that Jewish disloyalty is far worse than “dual loyalty.” It is dedicated Jews in powerful, multi-billion dollar organizations pledging loyalty not the nation or people among whom they live, but to a foreign nation and their own people who they view as superior and whose interests must come first. What is the loyalty of the Jewish organizations the Jewish Daily Forward says are worth tens of billions of dollars.

It is also mega-billion dollar Jewish oligarchs controlling vast media empires to relentlessly advance Jewish interests and the racist state of Israel in every reference to Jewish people. It is ungodly rich Jewish oligarchs who use money to control politicians to advance Jewish interests at the expense and damage to the gentile nations in which they live. Such can be seen in the Zionist infiltrators who orchestrated of the horrific wars for Israel’s interests such as in Afghanistan and Iraq.

It includes the Jewish media and government support for the rise of ISIS and al Qaeda to reign terror upon Israel’s enemy, the decent people of Syria. Ultimately, the Zi

o supported ISIS and al Qaeda invasion of Syria took a horrific toll of lives and treasure in Western nations. 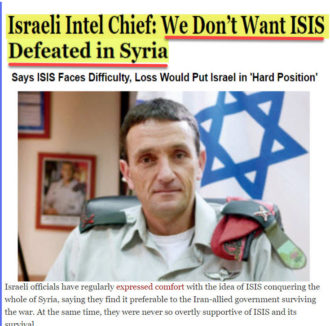 Let’s hope that all Jews don’t hold the views of elite Jewish leaders of powerful Jewish organizations like Stephen Steinlight’s American Jewish Committee. But one thing is certain, the Jewish elite wants all Jews to embrace their supremacist Jewish agenda. Is it the “canard” of “Dual Loyalty” or the “canard” of “undivided Jewish Loyalty to Israel and Jewish interests. Again, I urge you to read the words of Stephen Steinlight”

“I’ll confess it, at least: like thousands of other typical Jewish kids of my generation, I was reared as a Jewish nationalist, even a quasi-separatist. Every summer for two months for 10 formative years during my childhood and adolescence I attended Jewish summer camp. There, each morning, I saluted a foreign flag, dressed in a uniform reflecting its colors, sang a foreign national anthem, learned a foreign language, learned foreign folk songs and dances, and was taught that Israel was the true homeland.”