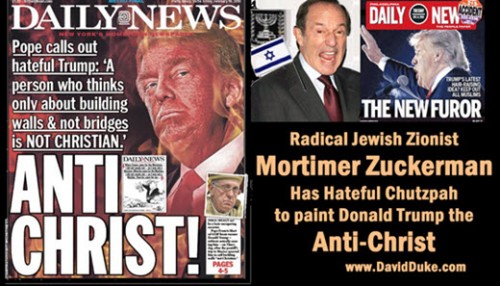 The Jewish knives are out now that Donald Trump has the Republican nomination within his sights! Both Jewish NeoCommies (progressives) and Jewish NeoConservateives (NeoTrotskyites) have united tribally to unleash a flood of excrement upon Donald Trump, whom they see as a real threat to their Jewish Establishment agenda.

The latest example of their Talmudic, Pharisaic Hatred of Trump is the Mainstream media full page attack on him by Zionist Neocon Mortimer Zuckerman with a full cover portraying Trump as a Devil and the Anti-Christ.

The Chutzpah of these destroyers knows no shame. The real anti-Christs, based in a Religion that claims in its sacred Talmud that Jewish priests are torturing Jesus Christ for eternity in boiling human Sheis, are calling Trump the Anti-Christ for wanting to build a wall to protect America!

Of course it goes way beyond that. Trump has called out and attacked the Jewish Banking Establishment as “Bloodsuckers.” He has confronted the Jewish Money Tyrants of Politics and exposed that they want to control politicians with their money while declaring that he won’t take their shekels. He has called out the needless Zio Wars in Iraq and the Mideast. He alone among the candidates is opposing their push for war with Russia. He is the only major figure pointing out that if immigration is not stopped it will destroy Europe!

Whether Trump turns out to be the enemy and the danger they perceive him as is yet to be determined. But they see him as a dire threat and now will pull out all their tricks, weapons, and totally douse him in their hateful excrement.

The Jewish Matrix of Power is of course Media, Politics and Banking. Jewish Tribalists the world over are promoting:

They perceive Donald Trump as the ultimate enemy and they realize just his positions and his political incorrectness pose a great threat by breaching these issues.

The Jewish knives are out.

The bigger the vote that Donald Trump gets the bigger the statement against the Zionist rulers of America and their Political Establishment Collaborators of the Mortal Enemy of our nation, our heritage and our people in both America and worldwide!

Previous Post Beyonce, the Superbowl, and how our society has been taken from us

Next Post Dr. Duke Speaks IN DEFENSE OF WHITE WOMEN & Exposes The Vicious Jewish Attack on Trump as the “Anti-Christ!”