The Zio-media, fully under the control of the Jewish Supremacist media oligarchs, have completely suppressed growing and incontrovertible evidence of massive pedophilia among the orthodox Jewish community—in complete contrast to the huge publicity they have given—and still continue to give—to far fewer incidents in the Christian churches.

In the much reported child abuse cases in the Catholic Church for example, the Zio-media has ensured that the whole world knows about that scandal—even though, by the church’s own admission, around 1.5 percent of its clergy have been involved in such deviance.

Although the Zio-media has occasionally reported child abuse in the orthodox Jewish community, it has not however received the same blanket coverage—even though the rates of abuse among that community are far higher—as much as 50 percent, according to a new independent study. 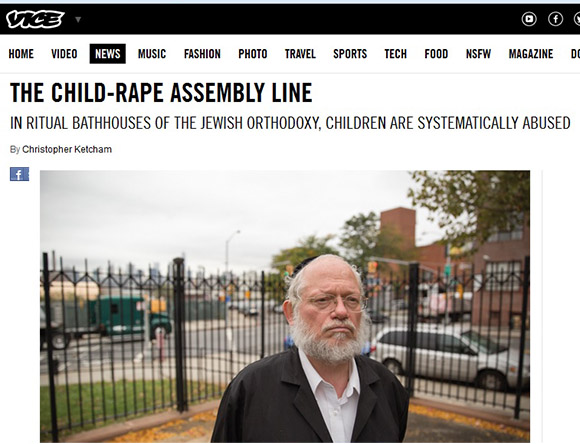 According to a new documentary by the independent Vice film company, called “The Child-Rape Assembly Line” it is revealed that in “ritual bathhouses of the Jewish orthodoxy, children are systematically abused” and that one rabbi who has dared to speak out against the practice, has been abused and even threatened with death by his fellow Jews.

According to the documentary, Rabbi Nuchem Rosenberg explained what he described as a “child-rape assembly line” among sects of fundamentalist Jews.

A member of Brooklyn’s Satmar Hasidim fundamentalist branch of Orthodox Judaism, Nuchem designs and repairs mikvahs in compliance with Torah Law. The mikvah is a ritual Jewish bathhouse used for purification. Devout Jews are required to cleanse themselves in the mikvah on a variety of occasions: women must visit following menstruation, and men have to make an appearance before the High Holidays such as Rosh Hashanah and Yom Kippur. Many of the devout also purify themselves before and after the act of sex, and before the Sabbath.

On a visit to Jerusalem in 2005, Rabbi Rosenberg entered into a mikvah in one of the holiest neighborhoods in the city, Mea She’arim.

Rabbi Rosenberg believes around half of young males in Brooklyn’s Hasidic community—the largest in the United States and one of the largest in the world—have been victims of sexual assault perpetrated by their elders. Ben Hirsch, director of Survivors for Justice, a Brooklyn organization that advocates for Orthodox sex abuse victims, thinks the real number is higher. “From anecdotal evidence, we’re looking at over 50 percent. It has almost become a rite of passage.”

A few weeks after giving that interview, Rabbi Rosenberg was walking through the Williamsburg section of Brooklyn when an unidentified man rushed up behind him, tapped him on the shoulder, and threw a cup of bleach in his face. He went to the hospital with facial burns and was temporarily blinded.

“Such is the measure of justice among the Satmar that a once-respected rabbi, now amputated from the community, should find himself chemically burned on a street in a neighborhood considered holy.

“Later Rabbi Rosenberg told me a story of being surrounded by young boys in Williamsburg. The boys cursed him, laughed at him, threatened him, and spat at him. He wondered how many of them would end up molested.”

* In reality, pedophilia is common practice in the Talmud.

Second century Rabbi Simeon ben Yohai, one of Judaism’s very greatest rabbis and a creator of Kabbalah, sanctioned pedophilia—permitting molestation of baby girls even younger than three! He proclaimed, “A proselyte who is under the age of three years and a day is permitted to marry a priest.” (Yebamoth 60b, p. 402.)

References to pedophilia abound in the Talmud. They occupy considerable sections of Treatises Kethuboth and Yebamoth and are enthusiastically endorsed by the Talmud’s definitive legal work, Treatise Sanhedrin.

In fact, footnote 5 to Sanhedrin 60b rejects the right of a Talmudic rabbi to disagree with ben Yohai’s endorsement of pedophilia: “How could they [the rabbis], contrary to the opinion of R. Simeon ben Yohai, which has scriptural support, forbid the marriage of the young proselyte?” (In Yebamoth 60b, p. 404, Rabbi Zera disagrees that sex with girls under three years and one day should be endorsed as halakah.)

The Pharisees justified child rape by explaining that a boy of nine years was not a “man.” One passage in the Talmud gives permission for a woman who molested her young son to marry a high priest. It concludes, “All agree that the connection of a boy aged nine years and a day is a real connection; whilst that of one less than eight years is not.”(Sanhedrin 69b.)

Because a boy under 9 is sexually immature, he can’t “throw guilt” on the active offender, morally or legally. (Sanhedrin 55a.)

A woman could molest a young boy without questions of morality even being raised: “…the intercourse of a small boy is not regarded as a sexual act.” (Footnote 1 to Kethuboth 11b.)

The Talmud also says, “A male aged nine years and a day who cohabits with his deceased brother’s wife acquires her (as wife).”(Sanhedrin 55b.)

In contrast to Simeon ben Yohai’s dictum that sex with a little girl is permitted under the age of three years, the general teaching of the Talmud is that the rabbi must wait until a day after her third birthday. She could be taken in marriage simply by the act of rape.

R. Joseph said: A maiden aged three years and a day may be acquired in marriage by coition and if her deceased husband’s brother cohabits with her, she becomes his. (Sanh. 55b)

A girl who is three years of age and one day may be betrothed by cohabitation. . . .(Yeb. 57b)

A maiden aged three years and a day may be acquired in marriage by coition, and if her deceased husband’s brother cohabited with her she becomes his. (Sanh. 69a, 69b, also discussed in Yeb. 60b)

It was taught: R. Simeon b. Yohai stated: A proselyte who is under the age of three years and one day is permitted to marry a priest, for it is said, But all the women children that have not known man by lying with him, keep alive for yourselves, and Phineas (who was priest, the footnote says) surely was with them. (Yeb. 60b)

Next Post The Truth about Iran, Atom Bombs and the Jewish Lobby