It is the “Israeli lobby” which is behind the push to have Congress preemptively surrender its war powers, by authorizing Obama to launch a war on Iran, well-known conservative commentator Pat Buchanan has said. 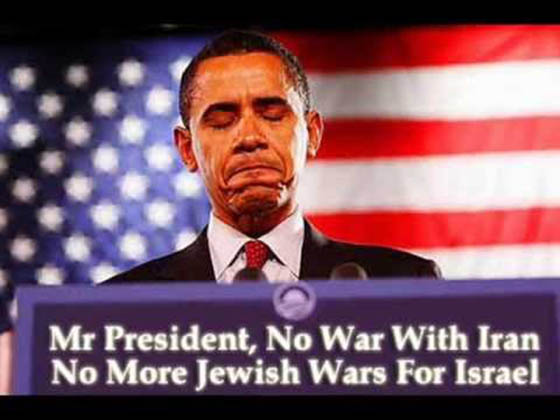 Writing on his website, Buchanan said that Israel and Benjamin Netanyahu actually wants war with Iran, and not peace.

“For what terrifies Tel Aviv, and rattles Riyadh, is not a U.S. war with Iran, but the awful specter of American rapprochement with Iran, a détente,” Buchanan said.

“If the Netanyahu cabal succeeds in sabotaging U.S. negotiations with Iran, it is hard to see how we avoid another war that could set the Persian Gulf region ablaze and sink the global economy.

“And just what is it that has Netanyahu apoplectic? A six-month deal under which Iran would freeze all enrichment of uranium, in return for a modest lifting of sanctions, while the final agreement is negotiated.

“The final deal would put permanent limits and controls on Iran’s nuclear program to ensure it is not used to build bombs. And there would be more and more intrusive inspections.”

Buchanan points out this solution would actually be in Israel’s interests, and not against it!  But still the unbalanced Zionist extremists seek war instead!

““How would this imperil Israel? Iran today has no atom bomb. Has never tested a bomb. Has never exploded a nuclear device. Possesses not a single known ounce of 90 percent enriched uranium, which is essential for a uranium bomb,” Buchanan writes.

“Nor does Iran have enough 20 percent uranium to make a bomb. And part of the stockpile it did have has been converted into fuel rods. There are inspectors in all of Iran’s operating nuclear facilities.

“How would new restrictions and reductions on an Iranian nuclear program that has never produced an ounce of weapons-grade uranium, let alone a bomb, threaten Israel, with its hundreds of atom bombs?

“Ten years ago, it turned out Saddam was telling the truth and it was Lindsey’s friends doing the lying about Iraq’s WMDs. Looks like the same old crowd up to the same old tricks.”

Referring to Netanyahu as ‘Bibi,’ Buchanan then discusses how the Jewish Supremacist leader is going to work:

First, get Congress to accept Israel’s nonnegotiable demand — Iran must give up all enrichment, shut down all nuclear facilities and ship all enriched uranium abroad — before any sanctions are lifted. This is an ultimatum masquerading as a negotiating position.

“Acceptance would entail an Iranian surrender Rouhani could never take home. It is a deal killer. Everyone knows it, even the Republicans now embracing the Israeli position as their own.

“Second, persuade Israel’s collaborators in Congress to impose harsh new sanctions, rub Iran’s nose in them, and scuttle the talks.

“Sunday, Bibi told the General Assembly of Jewish Federations of North America that what Kerry was prepared to sign was a ‘bad and dangerous deal’ that threatened Jewish survival, and, ‘on matters of Jewish survival, I will not be silenced.’

“Bibi intends to use the explosive issue of imperiled Jewish survival to break Obama and Kerry and force them to abandon their Iranian initiative.

“Finally, the Israeli lobby is behind the push by Lindsay Graham and Rep. Trent Franks to have Congress preemptively surrender its war powers, by authorizing Obama to launch a war on Iran at a time of his own choosing, without any further consultation with Congress.

“Remarkable. Self-proclaimed constitutional Republicans are about to vote Barack Obama a blank check for war.

“Today, though Obama and Kerry insist ‘all options are on the table,’ Obama has no more authority to attack Iran today than he did Syria last summer. Hill Republicans seek to remedy that by a preemptive congressional surrender of their war power.”

Previous Post A State of Mind: Who Would Swindle Money from Suffering?