The extent to which Zionist Supremacists control the US media and political process has been illustrated once again with a new story on CBS news which, while supposedly reporting “news”, casually admits—without any admonishment at all—that the state of Israel carries out international serial murders with the full knowledge of the US government. 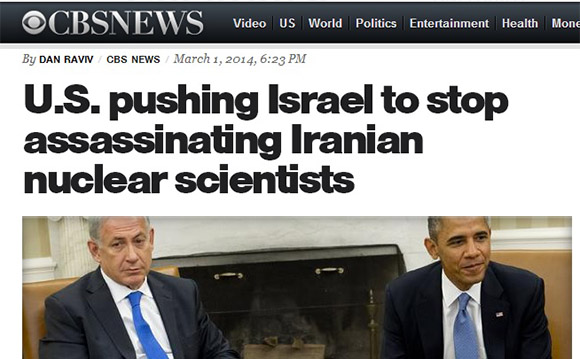 Then the article goes on to say that the US government is trying to “pressurize” Israel to stop the murders.

The exact sections read as follows:

“At least five Iranian scientists were murdered, most of them by bombs planted on their cars as they drove to work in the morning. Remarkably, the Israeli assassins were never caught – obviously having long-established safe houses inside Iran – although several Iranians who may have helped the Mossad were arrested and executed.

“In addition to strong signals from the Obama Administration that the U.S. did not want Israel to continue the assassinations, Mossad officials concluded that the campaign had gotten too dangerous.”

There are a number of important points to be learned from this CBS report:

1. Note how the “news” that Zionists fanatics engage in international serial murders is not condemned or even remarked upon as significant;

2. Note how the article disguises this shocking news of Zio-murders as part of a broader discussion of “negotiations with Iran” over the Zio-lie of Iran’s mythical “atom bomb”;

3. Note how it is directly admitted that the Zio-fanatics are engaging in their murderous spree with the complete knowledge of the US government.

Imagine for a second if the roles were reversed:

– Imagine if any other nation’s government had a program in place to deliberately murder Jews in Israel who work on that country’s nuclear weapons program (which, unlike the Iranian one, is actually real);

– Imagine if the US government knew of such a program to murder Jews in Israel. Would they do absolutely nothing and then, after a decade, try and “pressurize” the offending nation to stop killing Jews?

The answer to this scenario is obvious—and the answer also provides one of the clearest clues yet as to who really dominated the US media and political process.