A new article in the Jewish Supremacist Tablet magazine has claimed that the reason why the Jewish lobby in Washington D.C. is so successful in controlling US policy—a fact which Tablet openly admits to be the case—is because Americans are pro-Israel, “not because of any conspiracy”—but this is just a classic case of Zionist Supremacist misdirection.

According to the article, titled “U.S. Policy Is Pro-Israel Because Americans Are Pro-Israel, Not Because of AIPAC,” written by Yair Rosenberg and published on February 27 2014, the Israel Lobby “can only succeed because voters’ views give politicians the incentive to seek ‘pro-Israel’ bona fides.” 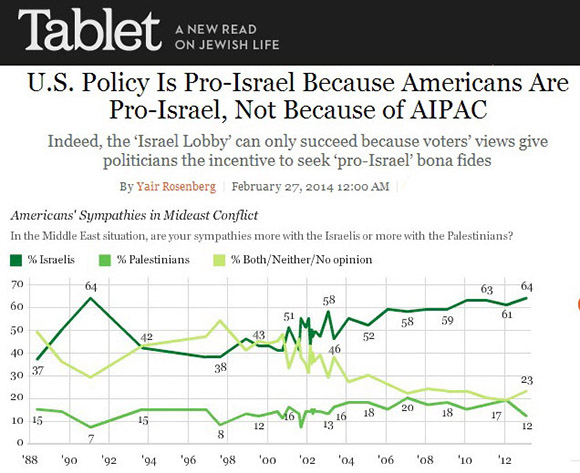 Referring to the upcoming AIPAC conference in America’s capital, the article says that AIPAC’s “detractors are mostly right—at least about the group’s ability to get results in Washington. In a town where perception is power, AIPAC never misses an opportunity to take credit for fostering pro-Israel sentiment in Congress and across America—from Iran sanctions legislation to U.S. aid to Israel.

“You see this napkin?” a foreign policy director for AIPAC once challenged a reporter. “In 24 hours, we could have the signatures of 70 senators on this napkin.”

Indeed, the centerpiece of AIPAC’s annual convention is its roll call of congressional supporters—a visual demonstration of the lobby’s seemingly unparalleled clout.

“These outsized portraits of AIPAC’s power serve the interests of both its supporters, who aim to reinforce the lobby’s standing in Washington, and its opponents, who seek to cast pro-Israel activists as master manipulators who lead the country astray from its national interest.”

The article goes on to claim that this influence is in fact not a result of the power of the Jewish lobby, but rather a result of some sort of mass support for Israel which just happens to make up average American political opinion.

“That backing is so robust because it has so many sources: a sense of shared democratic values between Americans and Israelis; a post-Sept. 11 affinity forged by the common threat of terrorism; deep Christian Zionism of many shades; Israel’s strategic role as an American proxy from the Cold War to the present; mutually beneficial high-level intelligence and military ties between the two countries; and historically unprecedented levels of American philo-Semitism.

“The upshot of these figures is clear: Politicians tilt toward Israel because their voters do. When AIPAC lobbies Congress on the Jewish state’s behalf, it is knocking on an open door, thanks to the lopsided convictions of the American electorate,” the article claims.

This is, of course, just more Jewish Supremacist misdirection. The article ignores the following realities:

1. The mass media—which shapes this supposed “public opinion” is completely under the control of Jewish Supremacists who continually pump out pro-Jewish and pro-Israeli propaganda;

2. This same Jewish Supremacist controlled media lies, distorts and slanders anyone who dares to speak out about the Zionist conspiracy. The fates of numerous members of Congress—and even ordinary people (such as those who took part in the Occupy Wall Street protests) who dared to speak out against Jewish Supremacist control, indicates precisely how they control “public opinion”—through simple threats and personal intimidation.

3. The Jewish Supremacist control of the banking system and financial institutions in turn controls the political process—which ensures that any politician who is not pro-Israeli simply doesn’t even get into the electoral starting blocks, for any party.

The recent case of Ron Paul, who despite doing  very well in a number of Republican presidential primaries, being blocked from even appearing at the Republican National Convention—just  because he wanted to stop all foreign aid, including that to Israel—demonstrates this point as well.

4. Finally, the fact that the American political process is now so distorted that only politicians with untold millions of dollars of campaign “contributions” can even afford to run for national office, means that only those who have obtained the backing of the Goldman Sachs-type institutions are presented to the American public as a “choice” in the “democratic system.”

This external—and hidden—control of the political process is the real cause of the “pro-Israeli sentiment” which the Tablet article describes. In reality, it is the tail which is wagging the dog, and the Tablet article is just another example of classic Jewish Supremacist misdirection.

Previous Post The Canard Strategy: How Jewish Supremacists use It