The former chief of the Salzburger Nachrichten  newspaper in the beautiful city of Salzburg, Austria, Ronald Barazon,  has once again come out in support of the extermination of the Austrian and the European people with a continued tsunami of mass immigration.

Ironically, he used the Jewish supremacist state of Israe, which has some of the most restrictive immigration laws in the world, as an example of why immigration will be a good thing for Austria and Europe!

He had the chutzpah to point out that the immigration of 750,000 “Russians” into Israel has not hurt the economy or the well-being of Israel. Of course, he left the the inconvenient truth that the the 750,000 “Russians” were not Russian at all but were all fellow Jews.

This Jewish hypocrite advocates the genocide of Austria and Europe, yet Israel must be a “Jewish State  dedicated to Jews. He praises the Jewish-only immigration into Israel, but promotes the extermination of the European people and culture with massive immigration

He didn’t point out that Israel will not allow a marriage to be performed between a Jew and the “inferior goyim” (non-Jews) and that Israel is segregated society in schools, neigborhoods and settlements — and even highways!.

He said that Austria needed the smiles of Syrian children, but didn’t point out that Israel, which borders Syria, has not accepted any of the Syrian refugees who are their next-door neighbors.

Barazon didn’t point out that the major reason that there are millions of refugees is because Israel and Jewish Zionists all over the world influenced Western governments and Arab monarchies to undermine the secular Syrian government of Assad and to support radical Jhidadist monsters such as al-Nusra and ISIS.

He didn’t point out that not only does Israel refuse to welcome the smiles of Syrian children, but Israeli war criminals have burned off the faces, eyes and arms, and legs of untold numbers of children. 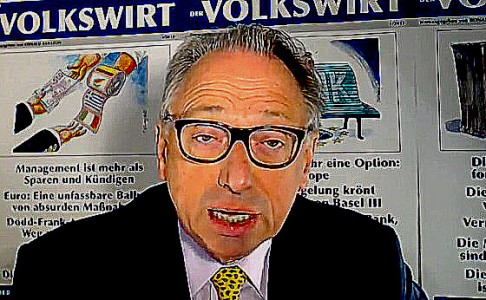 Barazon is no exception: his voice is that of the official program of the Jewish establishment in Europe and across the Western World: the extermination of  the Austrian and the European people and culture.

Next Post Dr. Duke and Pastor Dankof Expose the Exterminators of European Mankind!