By Dr. Patrick Slattery — Last night Fox News’ most popular pundit, Bill O’Reilly, was the guest on liberal darling Jon Stewart’s news comedy show. The two had an inane debate/shouting contest over the existence of “white privilege.” Stewart made way off the mark accusations that white privilege is alive and well, while O’Reilly made inept, and frankly cowardly, rebuttals. 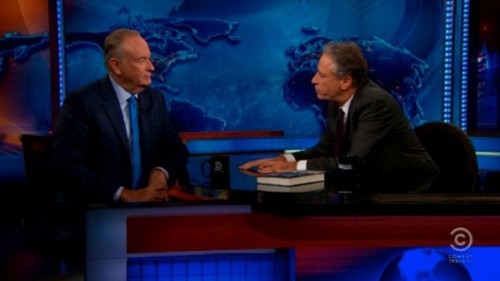 Stewart’s argument was that Africans were brought to America against their will, were subjected to slavery and Jim Crow, and nowadays often live in crime and drug-ridden ghettos, therefore whites enjoy privilege even today.

O’Reilly’s comeback was that slavery and Jim Crow were long ago abolished, and in today anyone in America who is willing to work hard and get an education and be honest can get ahead.

Here is the problem with Stewart’s accusation. The existance of black poverty does not prove white privilege. Establishing the repression of blacks in previous centuries certainly doesn’t proves white privilege in 2014, which was the point being debated, and does not even prove that whites enjoyed privilege in the past simply due to their race.

Even If you want to insist that privilege is the flip side of repression, you still must remember that whatever “privilege” existed in past centuries would have been spread thin over a white community that was eight or nine times the population of the black community. And of course, whatever surplus profits were being produced by underpaid black labor was hardly being shared evenly across white society. These profits were concentrated at the top economic classes, classes which have always had heavy representation of Jewish slave traders, merchants, and bankers.

And this was what make O’Reilly’s rebuttal so cowardly. O’Reilly’s very first point was that in today’s America Asians have higher average income than whites, so why not talk about Asian privilege? Stewart shot back that Asians worked hard and got ahead, but it’s whites that make the rules for society and that is the essence of white privilege. Meanwhile, the elephant in the room trumpeted loudly and trampled through the studio.

O’Reilly was too cowardly to point out that Jews have much higher incomes that whites or Asians, that in fact they, and not whites, make the rules for society and that they have made two sets of rules: one for themselves another for the despised goyim.

Whites are legally forbidden from showing any preferences for other whites in hiring or college admissions, and in fact are often obliged to discriminate AGAINST fellow whites in the name of affirmative action. Jews, on the other hand, are completely exempt from such rules, and show massive nepotistic favoritism in education institutions, in the media, in business, in government, and in a variety of professions.

If whites were really making the rules, would they implement policies that massively discriminate against Europeans in immigration, ensuring that in the span of one lifetime America will go from a 90% white majority to a country where whites will be a marginalized minority?

If whites were really in charge, why would they all but bar European Americans from elite universities. (One percent of college age Jews go to Harvard, as opposed to only 1/40 of one percent of whites that age.)

Why would whites use their “privilege” to send massive numbers of their kids, along with black and hispanic kids, to be killed and maimed in insane wars for the Jewish supremacist state of Israel? Why would they use their privilege to have the Fed give away trillions of their dollars to largely Jewish banksters?

Stewart, who wears his Jewishness on his sleeve,* didn’t even try to portray himself as a self-hating white. His tone was very much “you whites with your privilege.” All the while O’Reilly knows full well that Stewart, and the people at Viacom who runs Stewart’s network, and the people at O’Reilly’s Fox network, and for that matter the people who run CNN and the other networks, are, in the words of Rick Sanchez, “a lot like Jon Stewart.”

Stewart could taunt O’Reilly all he wanted, knowing full well that O’Reilly wouldn’t dare mention Jewish privilege. What was wrong with this debate is emblematic of what is wrong with our entire political culture. Their is so much rancor and polarization, without either side ever getting the crux of the issue. There is no white privilege in America today.

Whatever there once may have been of it was long ago replaced by massive, concentrated Jewish privilege. Stewart is completely a product of it. And he knows O’Reilly will never mention it, even as it stares him in the face. Because O’Reilly doesn’t want to go the way of Rick Sanchez, who dared to scoff at the notion that Jon Stewart was part of a “powerless minority.”

No, O’Reilly would never mention Jewish privilege. Because he wants to keep his own privilege: Sabbath Goy privilege.

Next Post British Cabinet Member: “US is In Hock to [Jewish] Financial Lobby!”