Senior British Member of Parliament Alan Duncan—who is also a current cabinet minister in the British government—has said that US politics is “under the control of a powerful financial lobby” and demanded an end to the practice of the “Israeli lobby” funding UK political parties to influence them to support the Jewish state. 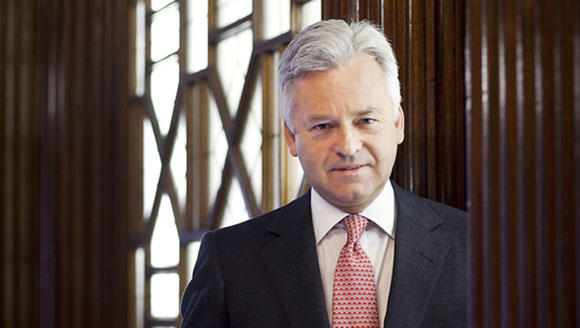 Duncan, who is a Minister of State in the UK’s Department for International Development, made his first comment during an interview with the BBC’s Radio 4.

Speaking to interviewer Martha Kearney on the subject of the recent vote by backbench MPs to overwhelmingly recognize Palestinian statehood, Duncan said (here, at 40min 12sec) that American politics is “dominated” by a “very powerful financial lobby”.

His exact words were that the vote in the UK parliament was needed in part because:

We all know that the United States is in hock to a very powerful financial lobby which dominates its politics.

The night before (and following the vote), Duncan gave a speech to the influential Royal United Services Institute (RUSI) on the topic of the illegal Israeli settlements in the West Bank, which the Zio-racists are using to ethnically cleanse Palestinians from their land.

In this speech, Duncan went on to demand that the “Israeli lobby” should desist from attempting to fund political parties in Britain in exchange for those parties unilaterally supporting the Jewish state, no matter what it does.

We need British Jews for the Conservative, Labour, or other UK parties; not the Israeli lobby for any party. The time has come to make sure above any doubt that the funding of any party in the UK is clearly decoupled from the influence of the Israeli state.

For this forthright—and accurate—summary of how the Jewish Lobby goes to work, the named perpetrators have once again reacted with typical Zio-viciousness.

A major article in the Jerusalem-based Times of Israel, for example, announced that “UK Jewish leaders slam MP for attacks on Israel, ‘poisonous slur’ against British Jews.” 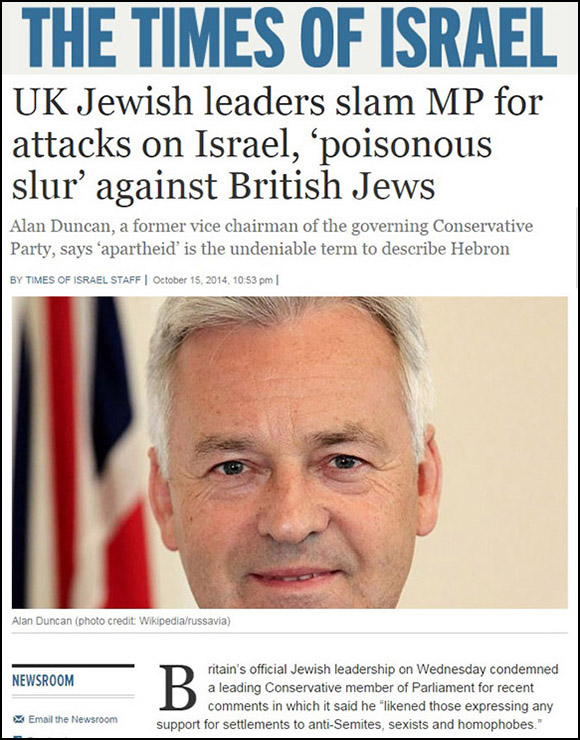 The Times of Israel quoted “Britain’s official Jewish leadership” who

[C]ondemned a leading Conservative member of Parliament for recent comments in which it said he “likened those expressing any support for settlements to anti-Semites, sexists and homophobes.”

Note the typical Zio-tactic: any non-Jew who dares mention the fact of Jewish power, is immediately condemned as an “anti-Semite,” even if, as is the case with Alan Duncan, that person has gone out of their way to deny that they are… the mere fact of mentioning Jewish power and the Jewish Lobby is, in the eyes of the Zio-fanatics, prima facie evidence of “anti-Semitism.”

According to the Times of Israel:

The Board of Deputies of British Jews also suggested that Sir Alan Duncan MP, a former vice chairman of the governing Conservative Party, “was raising the anti-Semitic theme of a Jewish lobby” when he told a BBC interviewer ahead of Monday’s Parliamentary vote on recognizing Palestine that America was dominated by “a very powerful financial lobby.”

The Vice President of the Board, Jonathan Arkush, said in a statement that … Arkush, “Alan Duncan attacked the British Jewish community for defending Israel. He characterizes defending Israel as equivalent to accusing people of wanting Israel’s destruction or being anti-Semitic. This is a blatantly false allegation against the leadership bodies of the British Jewish community. It is a poisonous slur which should be retracted immediately.”

What is this “poisonous slur” of which Duncan is accused?

It is this: In his speech to the Royal United Services Institute, Duncan explained in detail precisely how the Zio-fanatics are engaging in the ethnic cleansing of Palestine. He said:

Since 1967 Israel has continuously and systematically built outside its legitimate borders and has claimed its neighbours’ land as its own. Israeli settlements are the worst, most destructive, aspect of the military occupation, an occupation which has become the longest in modern international relations.

The continued expansion of settlements demonstrates that the occupier has little or no intention of ending that occupation or of permitting a viable Palestinian state to come into existence.

Back in 1993 when the Oslo Peace Process started there were, in the West Bank- not including Jerusalem—110,000 settlers.

There are now over half a million settlers living in around 120 settlements and 100 unauthorised outposts in the West Bank and East Jerusalem. And to compound the intrusion, the population growth of settler communities during the past decade has been almost three times that of the Israeli population as a whole.

This illegal construction and habitation is theft, it is annexation, it is a land grab – it is any expression that accurately describes the encroachment which takes from someone else something that is not rightfully owned by the taker. As such, it should be called what it is, and not by some euphemistic soft alternative.

Settlements are illegal colonies built in someone else’s country. They are an act of theft, and what is more something which is both initiated and supported by the state of Israel.

It is no exaggeration to say that many settlers are state-supported militia, defying international law, driving out the rightful inhabitants from their land, and creating an illegal economy at the expense of those who have been cruelly displaced.

Next Post Hear Dr. David Duke on How More People are Standing Up to the Zio-Fanatics