Commentary — Why shouldn’t Israel’s illegal nuclear weapons be ignored. The Chosen People shouldn’t have to be bound by the laws of mere goyim.

The president of America can bypass the lawwhich forbids tax aid to nations engaging in illegal nuclear weapons programs if he just ignores it, the U.S. Department of Justice (DOJ) has said in its response to an emergency motion seeking to halt aid to Israel. 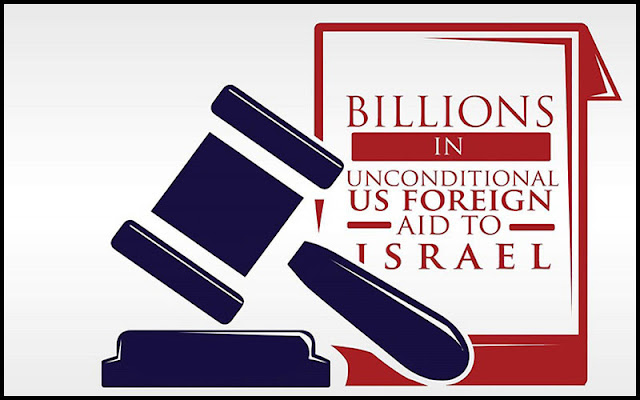 The astonishing claim is contained in the DOJ’s response to the Institute for Research: Middle Eastern Policy (IRmep) lawsuit to block the transfer of $3.7 billion in illegal US aid to Israel, which is currently before a three-panel federal appeals court.
This DOJ’s motion comes down to the suggestion that although the law states clearly that aid cannot be granted to nations engaging in illegal nuclear activity, as long as the president has not made a determination on the topic, such aid does not fall under the auspices of that law.
The document, filed on May 15, 2017, and signed by Sharon Swingle, and Joseph F. Busa, Attorneys, Appellate Staff Civil Division for the U.S. Department of Justice in Washington, D.C., also claims that Grant Smith, the IRmep director who brought the suit, does not have any standing to file the claim, nor has he suffered losses as a result of the aid being supplied to Israel.
The DOJ says that Smith “lacks Article III standing” to bring the suit—a reference to the constitutional requisites under Article III of the U.S. Constitution, which holds that a party seeking to sue must personally have suffered some actual or threatened injury that can fairly be traced to the challenged action of defendant and that the injury is likely to be redressed by a favorable decision.
Smith has earlier argued that the fact that his tax money is used to fund Israel in contravention of the law, and the fact that America suffers “blowback” terrorist attacks because of its military support for Israel, gives him Article III standing.
However, the DOJ has argued that the “plaintiff does not derive standing from the fact that he may pay federal taxes used to fund foreign aid to Israel.”
“And plaintiff’s allegation that U.S. aid to Israel perpetuates the Israeli-Palestinian conflict and thereby generates ‘blowback’ against the United States, including the attacks of September 11, 2001, is too generalized and speculative to establish injury-in-fact.”
The DOJ goes on to claim that the aid to Israel—which it freely admits is more than 20 percent of Israel’s total military budget—is not illegal because the president has not made any public determination of whether or not the Jewish ethnostate is contravening the law.
“The statute permits but does not require that the President make the determination that plaintiff seeks,” the DOJ response says.
“Nor does the statute create a justiciable, private right of action to compel the President to make such a determination.”
The DOJ admits that the “Arms Export Control Act prohibits the United States from providing foreign aid, including foreign military financing, upon the President’s determination that the recipient country has engaged in certain conduct involving nuclear technologies.”
However, it continues, the “statute does not cabin the President’s discretion regarding whether, when, or how to make any determination.”
“Nor does the statute establish any timeline for making such a determination, or specify the types of evidence and other factors to be considered, or the quantum of proof that must be satisfied.
“If the President does determine that a recipient country has engaged in the conduct enumerated in the statute, several waiver provisions may nonetheless permit the government to distribute foreign aid to that country.
“For determinations involving certain conduct, the President may notify congressional committees and officials that cutting off aid would ‘jeopardize the common defense and security.’
“The statute provides that, after notification, the President may continue to provide aid unless Congress enacts a joint resolution of disapproval.”
Furthermore, the DOJ says, the “President may exercise waiver authority entirely on his own.”
“Nothing in the statute contemplates judicial review of any portion of the procedures . . . nor authorizes a private right of action to compel the President to make a particular discretionary determination regarding a particular country.”
In other words, the DOJ is arguing that even though the law exists, if the president wants to give billions in aid to a country in contravention of the law, he can, and no one can stop him.
Finally, the DOJ says that “the balance of the equities and the public interest tip decisively against an injunction.”
“Interrupting the flow of foreign aid to Israel would threaten to impair our national security and foreign relations with a key ally.”
The case must be finalized before the end of May 2017, because the $3.7 billion set aside for Israel as a cash lump payment (drawn out of the borrowed emergency “government funding bill” passed by Congress at the beginning of May) will be paid over to the Jewish ethnostate at the beginning of June.