Mark Dankof’s observations if he was pastorally ministering to John McCain before his impending death: “Senator, a good Lutheran pastor preaches Law and Gospel. Here’s your situation in terms of your earthly performance under God’s Law: In life, you killed and wounded scores of your shipmates on the USS Forrestal ‘Wet Starting’ your A-4 aircraft in a deliberate attempt at grandstanding. Your Admiral father covered that up, as he did Israel’s deliberate attack on the USS Liberty which killed and wounded scores of Americans.

“You betrayed your POW colleagues in Hanoi, not under torture as is indicated by Empire Media, but for a guest room and morning coffee according to cell mates. I have interviewed several of them personally. Your real performance then would earn you the name Songbird. It is a name that has remained etched in the vivid memories of your comrades all these decades later. As in the USS Forrestal tragedy, you would evade a military tribunal and an inevitable court martial and dishonorable discharge due to your father’s power and influence in the inner sanctums of the US Navy elite and the covert assistance of the President of the United States.

“You divorced your first wife when she was ill, to marry a rich woman who financed your political career. She obtained her money from her father, Jim Hensley, a bag man for the Meyer Lansky Israeli Crime Syndicate.

“You have been a willing and deliberate liar and warmonger for the Zionist State of Israel, the banks, and the Military Industrial Complex. Among the countless number of deaths you have been a conscious and consenting party over many years, you have even stooped in recent years to photo opportunities with Sunni Wahhabic extremists from ISIS and the al-Qaeda fronts in your Israeli sponsored activities in Syria.

“In short, Senator, as I explain the gravity and seriousness of your eternal position, you are nearing entrance into the grasping Jaws of Hell. You are like Belshazzar. The Israeli American Empire is like his Babylonian Empire. Both have ‘been weighed and found wanting in the balance.’ (Daniel, Chapter Five)

“And so, I present you with your one route of escape. Confess your sins in the name of the Lord Jesus Christ. Rest in the mercy of the Holy Trinity.

“While your mind is still clear, read and consider the Gospel as found in I John, Chapter One. It is your only hope. The Empire, the Empire Media, and the Synagogue of Satan you have served cannot save you. I cannot save you. You cannot save yourself. Only Christ can, in your case, just before the stroke of Midnight.”

“Senator, concern yourself not with whether or not Donald Trump attends your funeral. Concern yourself with Eternity in either the Kingdom of God, or in Hell.” 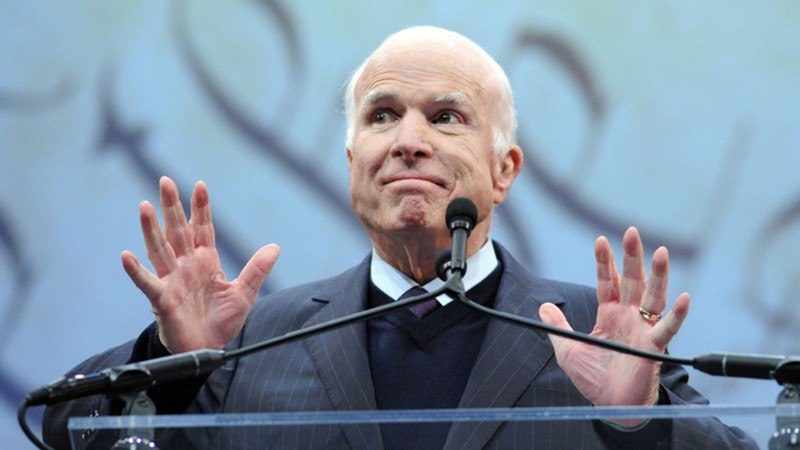