By Dr. Patrick Slattery — Just moments ago God Emperor Donald J. Trump and Revered Supreme Commander Comrade Kim Jong Un signed an agreement, the details of which will soon be revealed. At this point what is remarkable is just how in charge President Trump was. Not only did he do the bulk of the talking and take the lead while the two Great Leaders were together, but Trump seemed to dominate his own staff. Insane Judophile John Bolton was present but kept at arms length. Pompeo was smiling and supportive and apparently has vested himself in Trump’s success in this endeavor. Kelly did not appear happy, but followed orders like a good Marine. In contrast to Trump’s team of enemies, Kim had his loyal little sister Kim Yo Jong by his side almost the entire time.

More than that, President Trump even appeared to be issuing instructions regarding the seating at the working lunch and the location of photographers so everyone could “look handsome” in the commemorative pictures. While I can’t say what was going on behind the scene, Trump was completely Alpha in front of the cameras.

Kim was a contrast to Trump — not necessarily in a bad way, but very different. At 34, he is less than half of Trump’s age. He took over North Korea upon his father’s death when he was just 27, and despite his youth managed to consolidate his leadership in the face of plots and schemes from opponents in the military, the ruling Workers Party, and his own family. He went as far as arresting and executing his aunt’s husband, who was a rival to the thrown. So Kim should not be viewed as a lightweight or a pushover.

But in Trump’s presents he alternated between broad smiles and nervous expressions of confusion. The North Korean media will edit out Kim’s bewildered expressions, and Kim sounded confident and strong in his prepared statements, so they will have plenty of good content for the North Korean nightly news. Unlike Trump, Kim has a press that is not trying to destroy him.

Kim must have felt a fair amount of confidence going into Singapore, because he spent the night before the meeting visiting some of  Singapore hot tourist spots, including the pool-side observation deck at the top of the Marina Bay Sands hotel, a location that is a favorite of South Korea’s affluent elite. Apparently Kim trusted the security provided by Singapore authorities. 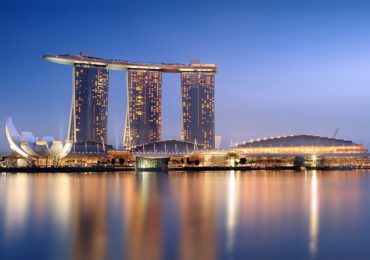 Marina Bay Sands Hotel. The weird boat-like structure at the top is the skydeck, which includes a long pool along the edge.

This meeting really is as important as the hype, really even more so. The Jew media and political establishment has brainwashed everyone into thinking that the Middle East is the center of the universe, but really the Korean peninsula is the place where the world’s strongest military and industrial powers (America, China, Russia, and Japan) are squared off. It could easily be the starting place for a Third World War. Even a limited regional war would have massive implications for humanity, as so much of the industrial and technological infrastructure of modern civilization is located there, unlike the Middle East which is only significant because if its oil.

Moreover, the United States is at a juncture like it’s never seen before. A couple of years ago our Jewish ruling class started its victory lap over what it thought was the corpse of white America, instituting gay marriage, doubling down on anti-white discrimination, and moving towards war with the last white-dominated great power, Russia. But the corpse wasn’t dead yet, and it put Donald Trump in the White House.

However, Trump has failed to consolidate his power, and has been fighting a losing and poorly thought out battle with the Jews who control the media and political establishment. This meeting with Kim marks an opportunity to finally take charge of his administration and the country. The interests of Trump and Kim and NOT that different, especially when you consider that Trump’s America first position was defeated in 1941 when Roosevelt declared war on Germany and Japan. The Korean War, and the ensuing hostility to North Korea, was always a globalist priority, never an American priority.

A major foreign policy achievement would bolster his support at home and give him the political capital needed to make progress on immigration. This is what he was elected to do: make peace, shut down immigration, and represent white interests.

What we need to see is more talks, confidence building measures such as an NBA game in North Korea and a Korean opera in Washington, and a declaration of the cessation of the Korean War and a peace treaty. Denuclearization is fine, but you cannot make Koreans forget how to be good at science. The idea of “complete, verifiable, irreversible denuclearization” is a joke, an impossibility, something being pushed by the military ziogarchy complex to block a deal and destroy Trump. The goal of denuclearization of the Korean peninsula is good, because it implies the removal of U.S. nuclear assets from South Korea as well. And if this eventually leads to some sort of sort of reunification of the Korean peninsula, the removal of U.S. troops should be a given.

Anyway, we will see where this will lead to. Perhaps the next step would be an invitation to the White House, where they can light up Washington D.C. with their respective trophy brides. President Trump said that he expects to meet with Kim often. Why not invite Putin while they are at it. With Trump surrounded by enemies in Washington, it makes sense for him to seek out allies among his enemies bogeymen.

Previous Post Dr Duke & Andy Hitchcock — Exposing the Zio lie that Iran was behind 911 – Israel & their Saudi servants did it!