Everyone who follows the news knows of so-called “racial conflict” in places such as Ferguson, MO and elsewhere—and of seemingly ever-increasing tensions between the races in America and other countries around the world. 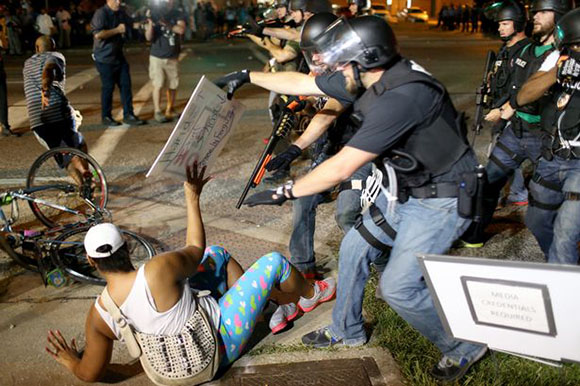 The Jewish Supremacist-controlled media and entertainment industry plays a crucial role in helping to set the stage for this ongoing conflict—while, behind the scenes, dedicated Jewish Supremacist activists work full-time at inciting and radicalizing African-Americans—and all  non-white Americans, for that matter—to engage in anti-European-American actions.

All of this is carefully designed not to provide “justice” to African-Americans or anybody else, but rather to bolster the Jewish Supremacist political agenda, which is based on a divide-and-conquer strategy of provoking disunity among everyone else while fanatically building Jewish unity and promoting a Jewish ruling elite.

The first step in this multi-faceted process is to influence African-Americans—and young people from that community in particular—to be filled with hate for European-Americans.

To achieve this, the media—through so-called “intellectual” channels and through the “entertainment” media (Hollywood, TV etc.)—feeds a constant diet of incitement and viscous propaganda which is designed to make African-Americans (and all non-European Americans) blame European-Americans for all their ills. 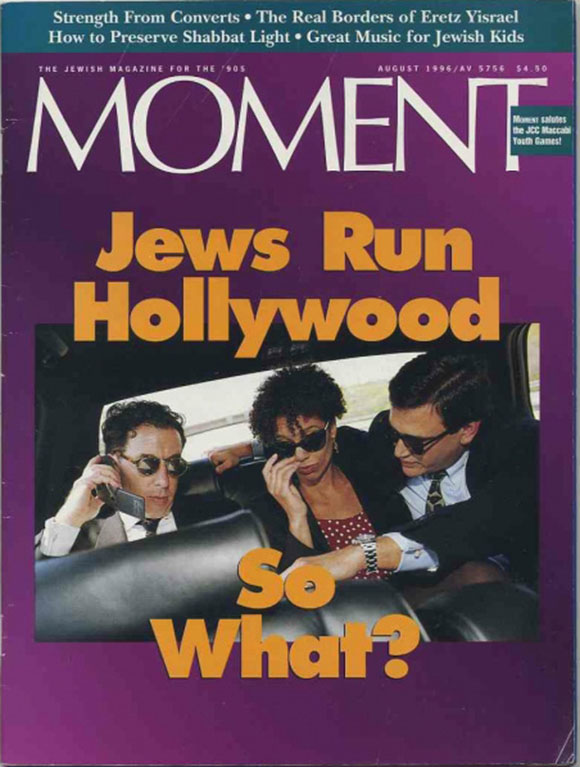 To do this on an “intellectual” level, the Jewish-infiltrated academic institutions twist, distort and outright lie about historical processes. A good example of this is the era is the issue of slavery.

According to the Jewish-Supremacist-dominated academic world, the Europeans are exclusively blamed for the tragedy of slavery—but the two most important facts, namely that Jews dominated the slave trade, and that the Islamic slave trade in Africans was far greater and far longer-lasting than the Trans-Atlantic slave trade—are completely suppressed.

By suppressing these two important facts, African-Americans are taught a completely distorted view of slavery—which singles out Europeans as the cause of all ills which affect African Americans today, even though this clearly not the case, as a number of honest African-Americans have long-since admitted.

In addition to this, the Jewish-dominated “entertainment” industry—specifically Hollywood and the music industry—have specialized in putting out movies and music which are specifically designed to incite African-Americans against Europeans.

It does not matter that these movies are based on complete fiction—such as the totally fabricated “Roots” series on TV, or the vicious anti-white “Django Unchained” movie (which featured an African hero asking “what’s not to like about killing whites”), or a twisting of the historical facts contained in “Twelve Years a Slave”—the end purpose is the same: to incite hatred against Europeans. 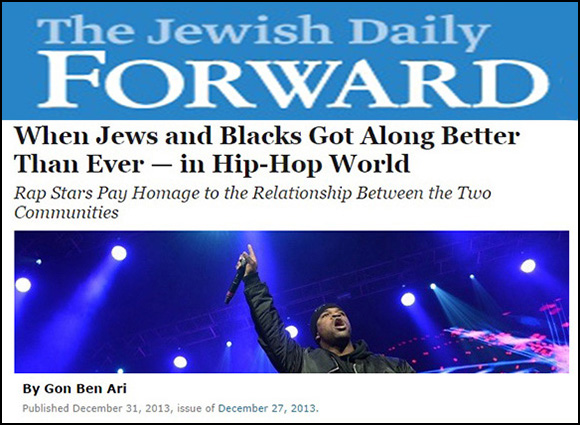 At the same time, the Jewish Supremacist controlled “music” industry has pushed rap music—with its promotion and glorification of violence, the gangster lifestyle, drugs and the denigration of women—and of course, anti-European hatred—onto African-American youth as a preferred “lifestyle.”

The effect of the latter strategy has also been to destroy African-American community life. For example, the illegitimacy rate among African-Americans now stands at over 72 percent—something that was unheard of prior to the negative Jewish Supremacist cultural “intervention” personified by rap (and other “art” forms which predate rap as well.) 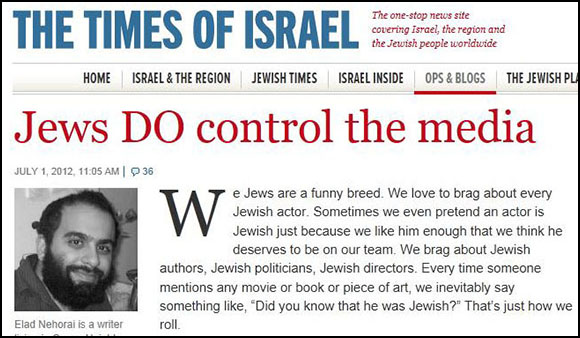 Through their domination of the mass media, the Jewish Supremacists have sought to make European Americans suffer from “white guilt” so that they will not think in collective terms of their people and interests—all this to facilitate the so Jewish racists can take over.

A good example of this is the Anti-Defamation League’s promotion of “white privilege” as a reason for the recent unrest in Ferguson, MO—even though all the statistics show that, proportionately, young European-American kids get shot more often by police than do African-Americans. 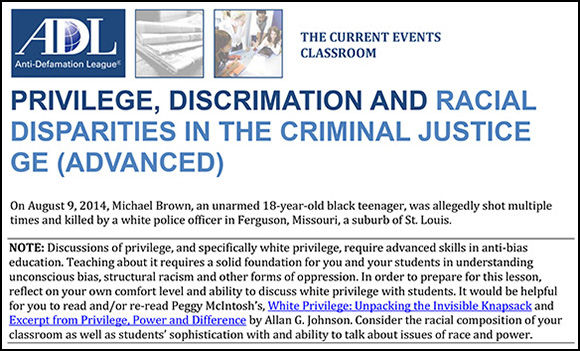 A good example of the type of distortion at work in the media was recently put out by the Jewish journalist Jeff Kelly Lowenstein, on the official site of the organization ColorLines. This study, conducted in conjunction with The Chicago Reporter, was an investigation of fatal police shootings in America’s ten largest cities, each of which had more than 1 million people in 2000. Several striking findings emerged.

To begin, African Americans were overrepresented among police shooting victims in every city the publications investigated. The contrast was particularly noticeable in New York, San Diego and Las Vegas. In each of these cities, the percentage of black people killed by police was at least double that of their share of the city’s total population.

This puts a completely different perspective on the claims made by Lowenstein: police tend to engage in gun battles with violent criminals, and if blacks commit more violent crime, it is logical that they will feature more often in reports of such engagements.

In fact, the claim by Lowenstein that blacks are “killed at a rate double” their population proportion, indicates that it is the other racial groups who are over-represented as police “victims” of shooting, and that blacks are in fact underrepresented.

These facts are all completely ignored by the Jewish Supremacist ADL and their co-religionists in the mass media, and are just left out of their discussions of “white privilege.” 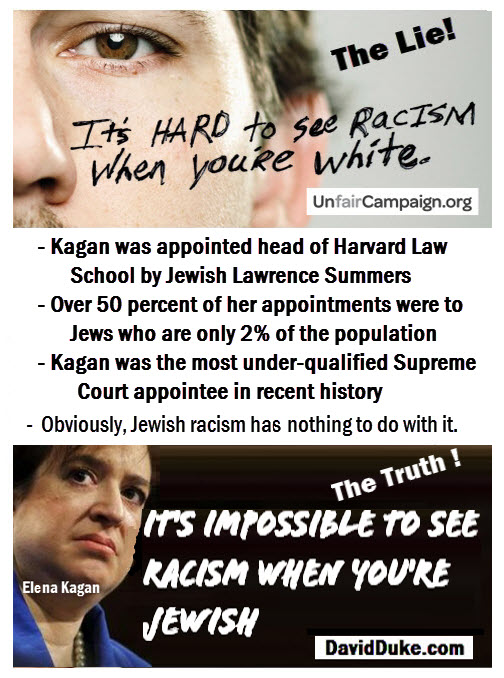 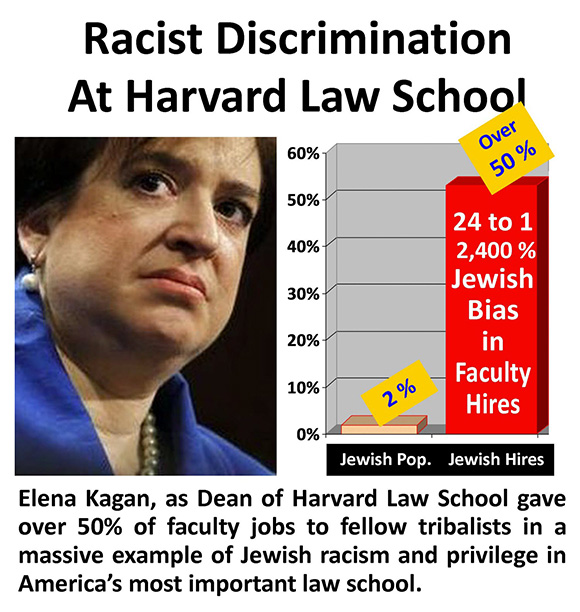 The cause of crime rates—and incidents such as the one in Ferguson, MO, are far more complex than just “blaming whites” as the Jewish Supremacists claim. These causes include higher testosterone levels among certain groups, socio-economic factors, and other factors –none of which can be justifiably blamed on any other racial group.

The tactic of spreading “white guilt” is not limited to the activities of dedicated Jewish Supremacist organizations such as the ADL. The Jewish Supremacist-dominated media is constantly engaged in propaganda to this end as well.

For example, the media continually tries to point out European American offenses against African Americans, the terrible things “White folks” do to Blacks such as the portrayed murder of the Black teen in Ferguson. Yet, the reality of cross race crime exactly the opposite. The truth is that many times more completely innocent White victims are assaulted, raped and murdered by Blacks in America than Blacks by Whites.

Watching the Zio media one would imagine that Blacks are far more likely to killed by Whites than Whites killed by Blacks. In fact the reverse is shockingly true.

If innocent Blacks were being robbed, assaulted and slaughtered by rates that innocent White people are, imagine the outcry about the “evil of White people” who would commit such a tsunami of violent crime against Black people.

Take for example, the horrific crime of rape. If one wants to delve into cross race crime, weigh one race’s actions against another race, when predators and victims are of different race, it an almost exclusively African-Americans on European-American females and almost no rape of Africans by Europeans.

Broken down further, what this means is that every day in the United States, over one hundred European-American women are raped or sexually assaulted by an African-American man.

If the Jewish Supremacist-controlled mass media was really interested in “racial justice,” about how one race is victimized by another, this shocking rape statistic would be headlined and the subject of massive public attention and debate.

However, because the victims of this outrage are European-American, the Jewish Supremacists simply ignore it, and instead concentrate on manufacturing “white privilege” stories about isolated—and often highly debatable incidents where African-Americans are victims (such as the Trayvon Martin case, where the alleged perpetrator was not even a European-American, even though the media portrayed Martin as a victim of “white racism.”)

Another example can be obtained by using official US government resources to track violent interracial crimes from the records held by the FBI. The FBI’s Supplementary Homicide Reports can be accessed here, and from this resource the following can be found:

Factoring in “unsolved” murders, this 42% murder rate could even be higher.

Why does the Jewish Supremacist media not report on this statistic?

Or, put another way, consider that the media’s reaction would be if poor income white males aged 12–49 were responsible for a ten times higher murder rate than poor income African Americans? Wouldn’t this be offered as reason to further demonize that European Americans?

The US Violent Crime Records are a real eye-opener in this regard as well. In 1963—a date which perfectly coincides with the Jewish ideological takeover of the media and the destructive values—violence, drugs, sexual abuse, etc.), there were 316,970 violent crimes (rapes, assaults, murders) in the US.

And what happened after 1963? American media went from overwhelmingly White presence, Christian values, and ethical values, to more and more violence, blood, and promotion of every possible kind of degenerate behavior, including fascination with violence and all kinds of sick and perverted behavior in films and TV, making fashionable drug and alcohol abuse, sexual degeneracy.

In only thirty years of the most massive Jewish chutzpah and takeover of American society, violent crime in the US was slightly over SIX TIMES the 1963 level—even factoring in longer prison sentences starting in early 1980s.

Racism can not be used to explain this massive crime increase, because during the 1960s massive new opportunities became available to African Americans. And it must not be forgotten that most of the Black victims of this crime were fellow Black people, including children who were caught in the crossfire and who were induced into drugs and other kinds of addiction and destructive behavior.

“Poverty” does not explain this massive rise in crime: because it has happened in the era in which there have been massive handouts and entitlements, affirmative action, increased education and much more, has been given to the African-American community.

It is part of the “divide and conquer” strategy which Jewish Supremacists employ to keep non-Jews squabbling among each other—and all the while, a tightly-organized Jewish elite makes sure that it has the reins of power to promote its own, and highly racist, private agenda.

It is important that Europeans understand that the vast majority of the crime from which we suffer today–committed by both Blacks and fellow Whites–has been created by the Jewish control of the media, and their influence over societal institutions such as the criminal justice system.

Furthermore, the change in mentality about all these things among our people, the divisions within the European community have been led almost in toto by Jewish agitators. Radical feminism, gender politics, have all been part of the divide and conquer scenario.

The Jewish domination has also prevented Black people from realizing their own deeply inherent ideals of eventually living in a society of their own making. The truth is, as shown by the popularity of Marcus Garvey, most Black people were not trying to be integrated into White society, but rather that they simply wanted empowerment of their own people in their own ethnic communities in line with their inherent nature and heritage.

The truth is that both European Americans and African Americans have suffered from the Jewish supremacist control over America.

Nothing has devastated the African American community more than the Zio-Hollywood promotion of every imaginable degenerate and destructive behavior. And, aspiring and hard-working Blacks have suffered exactly like the White middle and lower classes, in no small part from Jewish policies and the incredible theft of trillions by the International Banks and the control of American policy that has led America to trillion dollar wars for the Jewish State of Israel.

Only when the Jewish extremist tyranny over is America is broken, can their European survival, but it is just as crucial for the true fundamental interests and well-being–of African Americans as well.