A meeting of over 300 rabbis from 40 European countries has compared assimilation of Jews with non-Jews to the “Holocaust,” called on Jews to immigrate to Israel to remain pure–and at the same time announced their opposition to Hungarian groups which seek to keep that nation Hungarian. 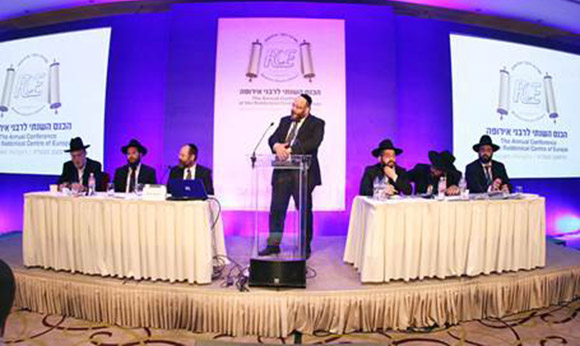 The RCE was holding a conference in Budapest, which, according to the Israeli “Israel National News” service Arutz Sheva, discussed the “wide-spread phenomenon of assimilation threatening the continued existence of their Jewish communities.”

According to figures presented at the conference, a majority of European Jews intermarry with non-Jews and a majority of children from such marriages are not raised as Jews.

These figures are, of course, a gross exaggeration, because the large growth in the Jewish population in both Europe and America is from the ultra-orthodox section of the Jewish community—those who are the most fanatic, the most religious, and the least likely to marry outsiders.

Nonetheless, the Jewish Supremacist leadership always likes to engage in assimilationist scare stories to keep their community in line, by threatening them with “extermination” should they dare to get too close to non-Jews.

The RCE conference was no exception to this rule, with a member of the Israeli Chief Rabbinate Council Rabbi Shimon Elitov saying that “assimilation . . . is worse that the physical Holocaust.”

The reader is encourage to stop and think about this statement for one minute: what would these same Jews say if any European, African or Asian religious community leader had to stand up at an official conference of their church and declare that “assimilation with Jews is a Holocaust”?

These same Jews would be screaming “anti-Semitism” and “racism” from the rooftops, and employing their brethren in the corridors of power to punish any such church, community or nation who dared to say such a thing.

But because it is Jewish Supremacists making these remarks, there is not a peep of protest from the mass media or any western government.

At the RCE conference, Israel’s Deputy Religious Services Minister Eli Ben-Dahan proudly announced that the best way for Jews to avoid assimilation was to immigrate to Israel, where, he boasted, the assimilation rate was “a mere thousandth” of what it is in Europe.

As if all this was not enough, the RCE conference was preceded only a few weeks earlier in Budapest by a joint meeting of that organization, the European Jewish Parliament (EJP), and the European Jewish Union (EJU) where they expressed “their concerns about the rise” of the Jobbik party in Hungary—which seeks to keep Hungary Hungarian.

According to a report on the RCE website, the three Jewish organizations urged the Hungarian authorities to restrict freedom of speech to stop the spread of “racism” in that country.

Yet it seems that the only real racism on display in Hungary today, comes from those same Jewish Supremacists who hate Gentiles so much that they think mixing with them is a “holocaust.”