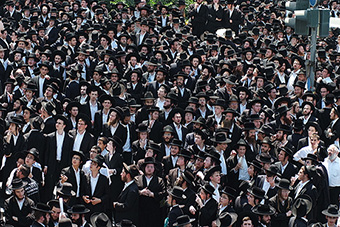 Why do Jews behave the way they do? Part II of a four part series.

The divergence of the extremist elements of Jewish character from the rest of mankind’s mores and cultural values becomes increasingly more pronounced.

A news report in the YourJewishNews.com news channel has announced that the chief rabbi of a Hasidic sect of Jews, called “Gur” has issued a ban on handshakes between men as “it might lead some to sin.”

According to the report, the head of the Gur education department, Abraham Benjamin Silberberg, said that shaking another man’s hand is now prohibited because it can lead to sinful thoughts.

Silberberg said that two males are only allowed to touch each other’s fingertips, however, it is better for men and boys to avoid touching completely.

He also instructed yeshiva teachers to educate teen boys and young men to avoid touching each other. “This new prohibition will ensure the holiness of our next generation,” Silberberg said.

A few weeks ago, several rabbis in the Israeli city of Bnei Brak issued a ruling that it is prohibited to carry a groom on one’s shoulders while dancing at weddings. The rabbis said that they banned the practice after a groom, who was carried on a friend’s shoulders, was unable to consummate his marriage after the wedding. 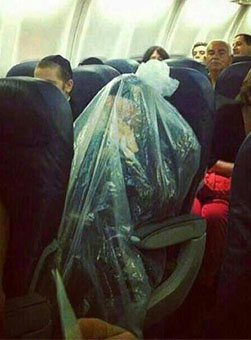 Astute readers will also recall the story earlier this year about the “Jew in a bag.” This was a picture of an Orthodox Jew–most likely a Cohen, or holy priest—tied up in a plastic bag on an airplane because the craft was flying over a cemetery. Apparently it is forbidden for these “holy” Jews to even visit, much less fly over, a cemetery.

These acts of weirdness are extremely common among Jews, as anyone who has been up close to that community will testify. When they are given coverage in the Jewish Supremacist-controlled media, they are usually dismissed as harmless acts by religious cranks.

Yet the reality is that these “acts of cranks” are in fact the norm among the orthodox religious Jewish community, and not the exception.

In fact, these acts of weirdness are actually becoming more common, not less, as time goes on.  This is because the number of ultra-orthodox Jews is growing, in real numbers and as a proportion of the number of Jews themselves.

A report in the Jewish Journal of January 2013 revealed, for example, that Haredi Orthodox Jews accounted for the bulk of Jewish population growth in New York City.

“UJA-Federation of New York last week released more details from its 2012 demographic study to show that two-thirds of the rise in the number of Jews living in metropolitan New York City occurred in Borough Park and Williasmburg, two largely haredi Orthodox communities,” the report said.

In Israel, an official government Central Bureau of Statistics report (here, in Hebrew, translatable on the Internet) has shown that the ultra-Orthodox population has a significantly higher birth rate than other Israeli Jews. The ultra-Orthodox currently make up about ten percent of Israeli society but by 2059 are projected to constitute over thirty percent.

In other words, the really, really, weird element of the Jewish population is growing in numbers with each passing year.

In fact, in Israel, the ultra-Orthodox population will grow by 580% to reach 5 million people—and that sect of Judaism, by and large, does not work, and does not teach its children any of the core subjects that will make them employable in the future.

To understand Jewish behavior, it is important to understand why that community behaves the way it does—towards themselves, their neighbors and the Gentile Goyim in particular.

In reality, the anthropological origins all human behavior has a biological origin. The thoughts we think, the ideas we formulate in our brains, all the metaphysical philosophical concepts we create, are all the products of synapses and chemical reactions in our brains. Such were the products of the evolutionary environment over thousands of years. Environmental factors that affected behavior became embedded in the genes as much as physical characteristics.

We are, in other words, in our totality, the product of our biology. Everything we are, our thoughts, actions, ability, character and behavior are affected by our nature-ordained biological make-up. All of these fundamental characteristics are in turn affected by the environment, or culture in which human beings live.

As individuals, when we consciously create an environment in our lives that makes us healthier, more fit, more accomplished, more productive, happier we can literally affect our own behavior. This is illustrated by the fact that many people have adopted lifestyles that have improved their health, increased their level of accomplishment and strengthened relationships and families.

The same principles are true in groups as well. A group can pursue patterns that are beneficial to themselves and humanity or they can create institutions that are harmful to human rights and higher human values.

And Jews are, despite their clearly false claims of being “chosen by God to be elevated higher than all others” are no exception to this biological rule. Their behavior is the product of their make-up, in the same way that tigers are carnivores because of their innate make-up, or butterflies are herbivores because of their innate make-up. The extremist elements in the Jewish community foster every misanthropic behavior of Zionism and its foundation of  Jewish racism and tribalism. The structure of Jewish community reinforces and increasingly embeds these ultra-racist character elements by promoting increased reproduction of the most extreme and misanthropic elements — such as the ultra orthodox. These extremists have the highest birthrates among the Jewish population worldwide.

Jews have thus evolved and adapted to be behave in a certain pattern—and this understanding provides the only logical explanation for their attitude towards non-Jews. And this is a subject we should approach scientifically if we are, as non-Jews, to defend our own fundamental human rights and survival.

Part I of this series can be found here.

Previous Post How the Jewish Supremacists Censor Your News