The unusually honest Zionist mayor of the town of Upper Nazareth in Israel has inadvertently revealed a dramatic insight into the ideology and origin of Jewish Supremacism by saying that if his town is “racist” for being Jewish, than ““Israel is a racist state.” 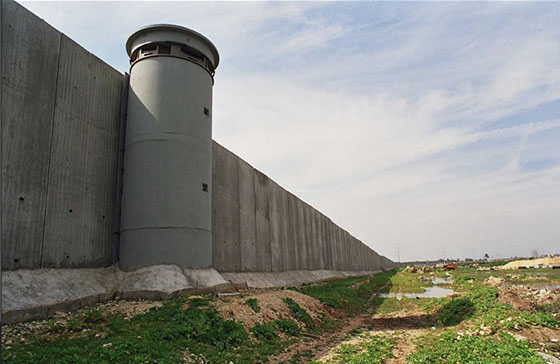 Writing in the Haaretz newspaper in Israel in response to criticism for his re-election campaign platform that Upper Nazareth would remain Jewish if he was re-elected as mayor, Shimon Gapso said that “Yes — I’m not afraid to say it out loud, to write it and add my signature, or declare it in front of the cameras: Upper Nazareth is a Jewish city and it’s important that it remains so. If that makes me a racist, then I’m a proud offshoot of a glorious dynasty of ‘racists.’”

Gaspo goes on to claim that the demand for a Jewish state is, if defined in those terms, a racist endeavor which is founded in what he believes to be an order from God: “[It] started with the ‘Covenant of the Pieces’ (that God made with Abraham, recounted in Genesis 15:1–15) and the explicitly racist promise: ‘To your seed I have given this land’ (Genesis 15:38).

“When the Jewish people were about to return to their homeland after a long journey from slavery in Egypt, where they were enslaved for racist reasons, the God of Israel told Moses how to act upon conquering the land: he must cleanse the land of its current inhabitants. ‘But if you do not drive out the inhabitants of the land from before you, then those of them whom you allow to remain… as I thought to do to them, so will I do to you’ (Numbers 33:55–56).

“God gave them an explicit warning. Yes, the racist Joshua conquered the land in a racist manner. More than 3,000 years later, the Jewish people stood bruised and bleeding on the threshold of their land, seeking once again to take possession of it from the wild tribes that had seized the land in its absence. And then, an outbreak of racism flooded the country.” 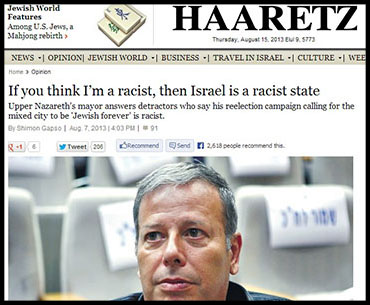 While outside observers have long known of the overtly racial basis of the Jewish state, Gaspo’s “reasoning” provides a further deeper insight into the psychology of Jewish Supremacism.

The claim to Israel is not based on anything else than an order from God, this Jewish Supremacist claims.

In addition, the right to seize Gentile property and possessions is also ordained by God—and this extends out further not only to Palestine, but to all Gentiles lands, across the globe.

This insatiable demand to control everything, and to manipulate society for their purposes, is at the very core of the Jewish Supremacist ideology which today threatens the world like never before. 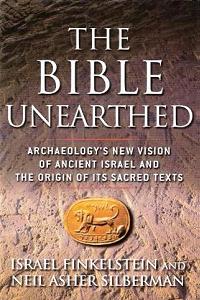 Yet, as Israel Finkelstein, Professor of Archaeology at Tel Aviv University, and Neil Asher Silberman, a contributing editor to Archaeology Magazine, have conclusively proven in their 2001 book, The Bible Unearthed: Archaeology’s New Vision of Ancient Israel and the Origin of Its Sacred Texts, there is in fact no sound historical or archeologically basis to the Jewish Supremacist claim.

According to Finkelstein and Silberman, most of the Old Testament and Jewish biblical history simply didn’t happen. They write:

Furthermore, the two Jewish authors point out, “despite modern archaeological investigations and the meticulous ancient Egyptian records from the period of Ramesses II, there is an obvious lack of any archaeological evidence for the migration of a band of Semitic people across the Sinai Peninsula…

“…[I]nstead of the Israelites conquering Canaan after the Exodus (as suggested by the book of Joshua), most of them had in fact always been there; the Israelites were simply Canaanites who developed into a distinct culture. Recent surveys of long-term settlement patterns in the Israelite heartlands show no sign of violent invasion or even peaceful infiltration.”

In addition, the Jewish authors point out that the book of Joshua’s claim that the Israelites conquered Canaan within a few years, is also a fiction as demonstrated by archaeological research.

Examination of the archaeology of the cities supposedly overrun within weeks (such as Hazor, Ai, and Jericho) shows that their destruction spanned a period of many centuries, with Hazor being destroyed 100 to 300 years after Jericho, while Ai was completely abandoned for roughly a millennium before Jericho was destroyed, and not being re-occupied until 200 years afterwards.

This is all highly important, because it demonstrates that Jewish Supremacism is in fact based on a fiction: the event which they use to “justify” their war against all Gentiles is completely made up.

The question can now be legitimately asked: what is it among Jews that drives the extremists in their ranks to carry out their campaigns of subversion against Gentiles?

What is the root cause of their behavior?

They really believe that God ordered them to seize, destroy and drive out the Gentiles, as Upper Nazareth mayor Gapso clearly stated.

Yet, given the fiction behind this belief, this is obviously not the truth.

There must be a deeper explanation, rooted in psychology and even genes—a topic which will be explored at length in a later article on this website.

Part II of this series can be found here.

Previous Post What Would the Jewish Supremacists Say if Any Country Barred Jews from Housing Developments?

Next Post Can You Become a Reporter or Advocate for This Site?