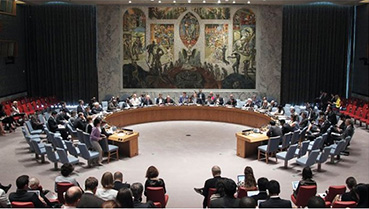 Yesterday, a major event happened at the United Nations Security Council meeting of the UN Security Council on the protection of civilians in armed conflicts—but you won’t even know that the meeting took place, because the Jewish Supremacist-controlled mass media has completely blacked it out.

The reason why the Jewish Supremacist controlled media have censored this news is simply because the debate was about Israel–and they always make sure that anything which exposes the Zionist state is removed from the view of their Western goyim.

In fact, unless one watched or reads Iran’s Press TV, you would not even know that the UN Security Council meeting happened.

Here is the proof: one of the speakers at the UN Security Council meeting was a member of Iran’s permanent mission at the United Nations headquarters in New York, Seyed Mohammad Ali Mottaqi-Nejad.

He said that the “persistent killings and violation of rights perpetrated against Palestinian people in the occupied territories are the outcome of the Israeli regime’s lack of accountability” and called “on the Council to take appropriate measures to protect civilians in occupied Palestine and other parts of the globe.”

Mottaqi-Nejad further drew attention to measures adopted by the Israeli regime in occupied Palestinian territories, particularly in the Gaza Strip, saying, “This regime has attacked civilians with various bombs and, by besieging one-and-a-half-million people in Gaza, it has turned this region into the largest prison in the world.”

The Iranian representative further declared that the Islamic Republic of Iran joined the call by the UN High Commissioner for Human Rights for lifting the siege on Gaza and the limitations resulting from the blockade.

He also underlined that applying double standards in assessing criminal acts as well as efforts to avoid accountability by the perpetrators will result in the intensification of conflicts and abuse of civilian rights.

“An obvious example of such practice is the Israeli regime, which, despite being the source of crisis in the Middle East, avoids accountability and continues with its crimes by accusing others,” said Mottaqi-Nejad.

If this had been the Israeli representative speaking on Iran, you can be assured that every single newspaper and television channel in America and the western world would have carried the Jewish remarks in full, and we would have been told once again about Iran’s “nuclear ambitions” and so on.

However, a Google news search for coverage on yesterday’s UN Security Council meetings turn up just ONE result, that from Iran’s Press TV.

The rest of the Jewish Supremacist-controlled media has just pretended that the meeting never happened.

This has to be one of the clearest examples yet of Jewish Supremacist media censorship and it is meaning for Americans, Europeans and all the non-European people of the world.

Americans and Europeans can see in this case a crystal-clear example of how the Jewish Supremacists manipulate their news in order to control their foreign policy.