Once again, the “hidden hand” which controls US foreign policy is exposed: A gaggle of Jewish Supremacists has been exposed as the major proponents of sanctions against Iran with the news that the three top donors to the “Foundation for Defense of Democracies,” (FDD) the leading think tank advocating for Iran sanctions, are top Republican Jewish fundraisers. 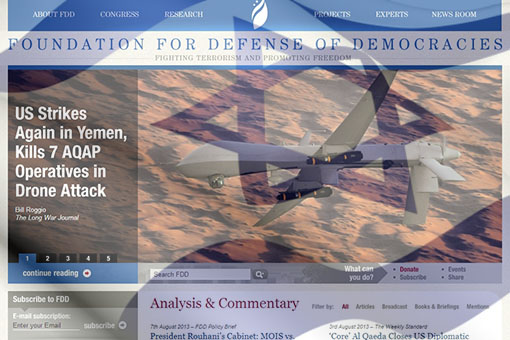 According to an article in the Salon magazine in New York, a review of the FDD’s financial filings found that between 2008 and 2011, Bernard Marcus, the founder of Home Depot, had given the foundation nearly $11 million; Paul Singer, a hedge-fund billionaire, had given $3.6 million; and Sheldon Adelson, the casino magnate, had donated about $1.5 million.

All three are active in the Republican Jewish Coalition and donate to other “Jewish” causes.

Marcus helped found the Israel Democracy Institute; Adelson is a major funder of Birthright Israel; and Singer is a board member of the Jewish Institute for National Security Affairs.

The FDD has taken a lead role in recent years in drafting Iran sanctions legislation, although its officials have mostly stayed out of the battles between Congress and the Obama administration over how and when to apply them.

According to Salon magazine, the FDD has “risen since its 2001 founding to become Washington’s premiere hawkish think tank.”

In addition, Singer, who gave $3.6 million to FDD, infused $1 million into Restore Our Future and over $1 million into the American Unity PAC, a Republican Party PAC that supports gay marriage.

At a June 2010 Republican fund-raiser, “Singer voiced frustration not only over financial policies in Washington,” Salon magazine continued, “but also on national security and foreign policy, particularly what he saw as the Obama administration’s inadequate support for Israel.”

Adelson, who contributed $1,510,059, is a close friend of Israeli Prime Minister Benjamin Netanyahu and a proponent of a hawkish U.S. foreign policy in the Middle East.

The revelations show once again that it is a tiny minority of Jewish Supremacists who determine and run US foreign policy—in the interests of their own, single-loyalty tribe and its state.