The Zionist Supremacist state of Israel, which already has one of the most racially-restrictive immigration policies in the world, is about to introduce DNA testing to ensure that no non-Jews from Russia enter the country. 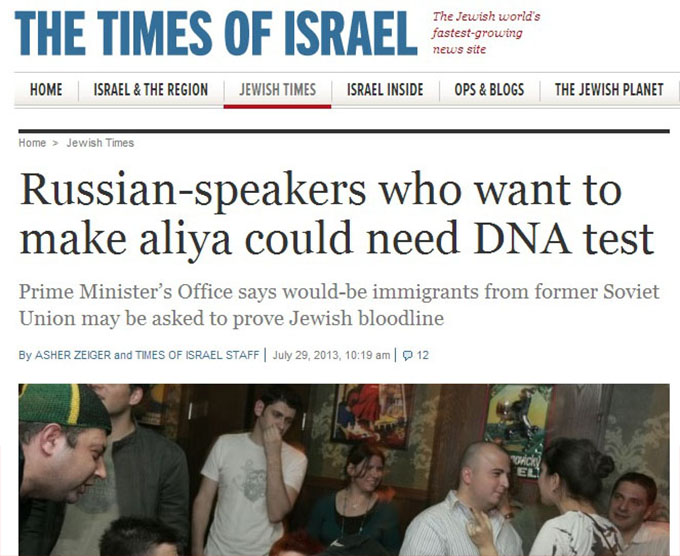 According to an article in the Times of Israel, Russian-speakers who want to make “aliya” will in future need a DNA test.

This development is the surest sign yet that Jewishness is not a cultural construct, but a biological one, and also further evidence that the “Khazar theory”—which would have introduced non-Semitic elements into the Jewish gene pool—is incorrect, as proved by earlier DNA evidence.

According to the Times of Israel, “would-be immigrants from former Soviet Union may be asked to prove [their] Jewish bloodline” and will be “subjected to DNA testing to prove their Jewishness.”

The announcement, made by the Israeli Prime Minister’s Office, said “many Jews from the FSU [Russia] who were born out-of-wedlock can be required to bring DNA confirmation of Jewish heritage in order to be allowed to immigrate as a Jew.

“A source in the PMO told Maariv that the consul’s procedure, approved by the legal department of the Interior Ministry, states that a Russian-speaking child born out-of-wedlock is eligible to receive an Israeli immigration visa if the birth was registered before the child turned 3. Otherwise a DNA test to prove Jewish parentage is necessary.

“A Foreign Ministry spokesman said that the decision to require DNA testing for Russian Jews is based on the recommendations of Nativ, an educational program under the auspices of the Prime Minister’s Office to help Jews from the FSU immigrate to Israel.

“The issue cuts to the heart of Israel’s Law of Return, which allows anybody with a Jewish parent, grandparent or spouse to move to Israel and be eligible for citizenship. Determining who is a Jew — a definition which has evolved along with the religion’s many streams — has led the interior Ministry to create a somewhat byzantine system of checks and rules and has sometimes led applicants, especially converts to Judaism, to fight for the right to immigrate in Israeli courts.”

This demand for DNA tests for immigrants to Israel contrasts dramatically with the demand for open borders made by all Jewish organizations in America and elsewhere.

In America, Europe and the rest of the world, Jewish Supremacists are the biggest supporters of mass immigration—but in Israel, they support massive immigration restrictions, even down to DNA testing!

Imagine for a second that any nation on earth would implement such a policy in reverse—that anyone showing Jewish DNA would be barred from entering a nation. The same Jewish Supremacists who support this policy in reverse in Israel, would be screaming “racist” and more…but, as usual, it is one rule for Jewish Supremacists, another for everyone else.