The racist Zionist state of Israel has such strict racially-based immigration policies that even some Jews have difficulty getting in, a new article in the US Jewish newspaper the Daily Forward has revealed.

In an article titled “Jewish Enough for Birthright — But Not for Israel,” the Jewish newspaper tells of what it calls a “Kafkaesque Dilemma[s which] Bedevil[s] would-be immigrants” to the Jewish state. 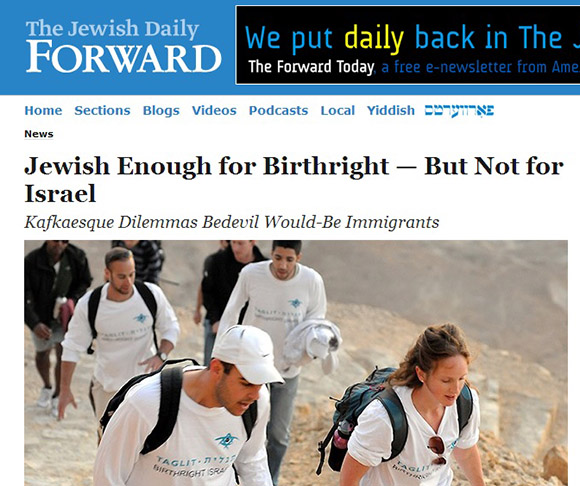 According to the article, “For those [Jews] born to two Jewish parents who were longtime members of recognized congregations and have a rabbi who can easily vouch for them, it’s usually a painless process [to immigrate to Israel].

“But for those whose families were never affiliated with a congregation, whose parents or grandparents may have lost their Jewish marriage certificates, who are the products of mixed marriages or have a parent who converted, providing this evidence can be a daunting task.

“It could be nightmarish enough to have them pack their bags and leave,” the Jewish newspaper says.

“They grew up believing they were Jewish. They signed up for programs in Israel hoping to strengthen their Jewish identity. They came, saw, fell in love and decided to stay.

“And then, just when they were about to accept their first job offer, they hit a wall. You want a work permit? Prove you’re Jewish – they were told by the Israeli authorities.

“Variations of this story are increasingly being heard among graduates of Birthright, study-abroad and post-college internship programs in Israel. Scores of young adults whose Jewish identity had never been questioned are suddenly being asked to prove their religious lineage when they request a change in their visa status.”

The issue at hand is the racially-exclusive immigration law upon which Israel is founded—the so-called “Law of Return” which allows any Jew, from anywhere, automatic right of residence in, and citizenship of, Israel.

“The catch was that to be eligible, applicants had to prove they were Jewish, according to the definition provided in the Law of Return.

“As evidence of Jewish lineage, the ministry requires a letter from a rabbi serving as the acting leader of a congregation, and in the case of converts, all the relevant paperwork documenting the conversion.

“Its decisions are contingent on the recommendations of the Jewish Agency, which reviews all these documents to determine if the applicants fit the definition of a Jew by Israeli law,” the Jewish newspaper said, revealing the completely racially-based nature of the law.

Quoting one case, “G., a 28-year-old Californian,” the Jewish newspaper says that this person first encountered trouble when applying for a work visa in Israel.

“I was told that the process would be expedited – and that I would not be charged for the visa – if I could prove that I was Jewish. I had a letter from my rabbi, but it didn’t specify that my mother’s side of the family was Jewish, so the Jewish Agency wouldn’t accept it,” she said.

“Because my mother wasn’t affiliated with any synagogue, there was no rabbi who could attest for her, so I had to ask my grandmother in South Carolina to get a letter from her rabbi stating that she was Jewish, and have him fax that letter to my rabbi in California, so that my rabbi could write a new letter confirming that my mother’s mother was Jewish, and that therefore so was my mother, and that therefore so was I.”