By Dr. Patrick Slattery — The Simon Wiesenthal Center has released its “2013 Top Ten Anti-Semitic/Anti-Israel Slurs.” The name of the list itself implies that it is anti-Semitic to oppose the criminal behavior of Israel.

The list was topped by Iran’s supreme leader Ayatollah Ali Khamenei, who in condemning Israel’s countless crimes referred to Israel as the “rabid dog” in the Middle East and said that Israel’s “leaders look like beasts and cannot be called human.” While his rhetoric may be rude, what level of civility does the Zionist state expect after unleashing decades of violence and misery on the region?

Turkey’s Prime Minister Erdogan placed second by blaming unruly demonstrations on “the interest rate lobby.” Is the Simon Wiesenthal Center confirming that old “canard” that Jews dominate banking? If not, what could be anti-Semitic about Erdogan’s lashing out at international banks?

A number of people on the list are familiar to David Duke show listeners. Pink Floyd’s Roger Waters and Jewish journalist Max Blumenthal. Like the others, they have been placed on the Zionist blacklist simply for publicly recognizing some of the obvious truths — Jewish power in the media on the part of Waters and racist fanaticism among Israeli rabbis on the part of Blumenthal.

That statements of the obvious would appear on a top ten list of “anti-Semitic slurs” is a testament to the hollowness of accusations by the Wiesenthal Center, the ADL, and the rest of the supremacist establishment regarding accusations. Indeed, number ten on the list isn’t even a statement, it is simply a gesture made by athletes in celebration: the quenelle. 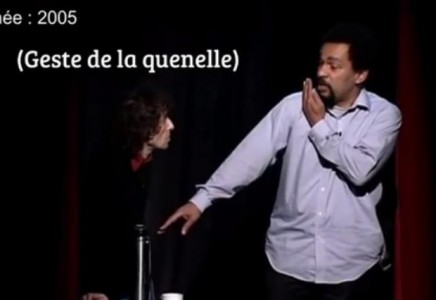 “Quenelle” is French slang for suppository, and the gesture is made by pointing with one arm how far the other arm is going “up yours.” As far as the shoulder is obvious limit. It was popularized by the French comedian Dieudonné (pictured above) in 2005, and immediately took on anti-establishment overtones. In 2009 he ran for the European Parliament on an anti-Zionist ticket and was pictured making the quenelle in a campaign poster.

Now paranoid Jewish supremacists claim this is a “reverse Nazi salute.” Yes, just like Michael Jackson’s Moon Walk is inverted goose stepping! These are the same people who see Hitler in a tea kettle.

The top ten list shows how the Wiesenthal Center and the rest of the supremacist establishment not only tries to tries to censor any valid criticism of Jewish tribalist behavior, but also whips up hysteria and paranoia among the Jewish people. This paranoia only serves to harden the tribalist attitudes of extremist Jews and worsens their behavior, thus provoking more criticism and feeding into a vicious circle.